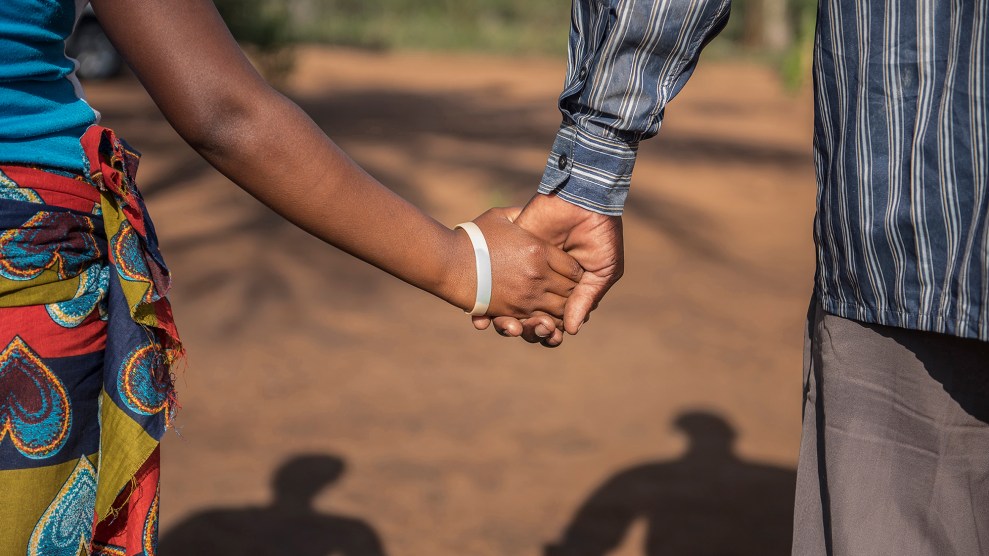 A 15-year-old girl with her husband to be in Mozambique, east Africa.Shiraaz Mohamed/AP

Drought-afflicted areas of Ethiopia are seeing “dramatic” increases in child marriage as the worst climate-induced emergency for 40 years pushes people to the brink, the head of Unicef has said.

Three consecutive failed rainy seasons have brought hunger, malnutrition, and mass displacement to millions of people in the Horn of Africa, including parts of Ethiopia, Somalia, Kenya, and Djibouti.

Many girls in Ethiopia now face being married at a young age as their parents seek to find extra resources through dowries from the husband’s family, and hope their daughters will be fed and protected by wealthier families, warned Catherine Russell, Unicef’s executive director.

Some areas of the vast Oromia region have seen steep increases in the practice, the UN children’s agency said, citing local government data. In the East Hararghe zone, home to 2.7 million people, child marriage cases increased by 51 percent, from 70 recorded during a six-month period in 2020-21 to 106 in the same period a year later.

“They’re afraid of violence; they’re afraid for the safety of the girls; they need resources; they can’t afford to feed them.”

It was just one of six drought-affected areas in Oromia to have seen a sharp rise in child marriages, Unicef said. Across those zones, cases have almost quadrupled. According to data received by Unicef this week, 672 cases of child marriage were recorded between February and August last year, whereas in the six months from last September to March this year, that number leapt to 2,282, local government figures showed.

“We’re seeing increases in child marriage that are quite dramatic,” Russell said, noting that more than 600,000 children are thought to have dropped out of school as a result of the drought.

She added that when girls were not in education and were forced to leave their homes, the risks of gender-based violence and of child marriage almost always increased.

“These people [have their daughters married] because they’re desperate for one reason or another: they’re afraid of violence; they’re afraid for the safety of the girls; they need resources; they can’t afford to feed them,” Russell said.

The impact was “debilitating” for the girls in the long term, she added. “It really cuts off all of their opportunities and ends up in a situation where they are more likely to start having children early; they are more likely to have children closer together; they’re young, so they’re not in a position to negotiate safe sex with their partners. It’s just one problem after another for these girls.”

According to data from 2016, 40 percent of Ethiopian girls were marrying before age 18—and 14 percent before their 15th birthday.

The drought threatens to set Ethiopia back in its attempts to lower its levels of child marriage, which are among the highest in the world. According to demographic data from 2016, 40 percent of girls in the east African country are married before the age of 18 and 14 percent are married before their 15th birthday.

Russell, who this week visited drought-hit areas, said she had discussed the issue with the country’s president, Sahle-Work Zewde, who said it was a priority area for her.

The drought is also pushing up the rates of severe acute malnutrition in the affected areas, with admission rates for children under five years old 15 percent higher in February this year than February last year. Russell, who visited sites where Unicef is treating malnourished children, said people were also being forced to drink contaminated water, putting them at risk of various diseases including cholera.

“We haven’t seen it yet,” she said, “but everyone’s very worried about cholera.” As a result of lagging vaccination rates, measles has already made a return, with more than 1,000 cases in the Somali region of Ethiopia and 16 confirmed deaths.

Like many in the humanitarian community, Russell said she was concerned that the huge global focus on Ukraine was sucking attention—and vital funds—away from other conflicts and crises around the world.

“I’ve been to that region, and I know how difficult it is there. I don’t begrudge anybody in Ukraine the coverage, because they need resources as well, but I think the international community’s not great at doing two things at once,” she said.

Unicef’s emergency drought appeal for the Horn of Africa had so far raised about 20 percent of its $250 million target, she added. While welcoming the UK government’s £17 million ($21.2 million) pledge, made in January and targeting the same region, she said it was “not close to enough.”