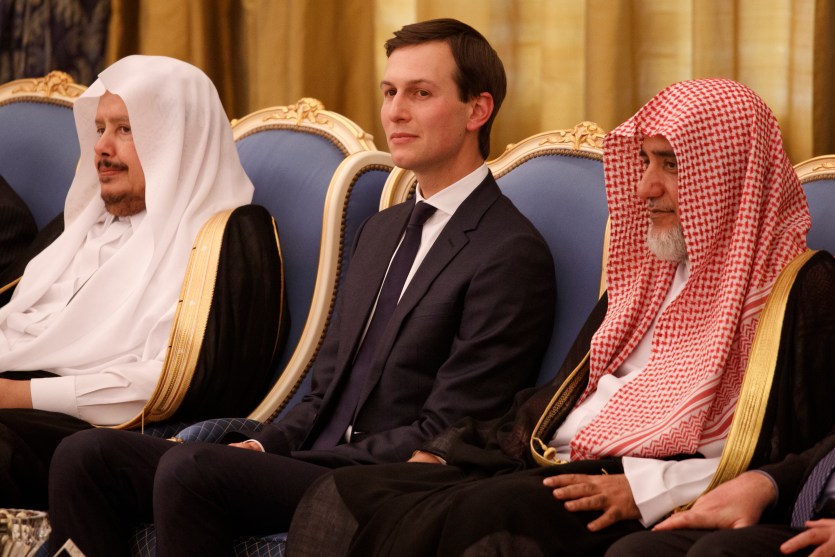 As a White House senior adviser, Jared Kushner watches a ceremony at the Royal Court Palace in Riyadh, Saudi Arabia, in 2017. Evan Vucci/AP

Editor’s note: This column by David Corn first appeared in his newsletter, Our Land. But we wanted to make sure as many readers as possible have a chance to see it. Our Land is written by David twice a week and provides behind-the-scenes stories about politics and media; his unvarnished take on the events of the day; film, book, television, podcast, and music recommendations; interactive audience features; and more. Subscribing costs just $5 a month—but you can sign up for a free 30-day trial of Our Land here. Please check it out.

In July 1980, President Jimmy Carter got some bad news. The Justice Department had filed a complaint against his younger brother, Billy, for failing to register as a lobbyist for Libya. Billy had taken two all-expenses-paid trips to Tripoli pursuing business deals there, and he had accepted $220,000 from the Libyans to develop what he called a “propaganda campaign” to promote the foreign policy objectives of dictator Moammar Qaddafi. In response to the Justice Department action, Billy belatedly registered as a foreign agent.

But the scandal persisted, and Carter handled the controversy well. Everyone knew he had little control over the irrepressible Billy, who had long struggled with alcoholism and only that summer sobered up. The president released a statement saying, “I do not believe it is appropriate for a close relative of the president to undertake any assignment on behalf of a foreign government.” The Senate Judiciary Committee, controlled by Democrats, initiated an investigation into what became known as Billygate, and Carter announced the White House would cooperate fully and waive any claims to executive privilege. Carter held a press conference and spent an hour taking questions about the matter, and he went further. He issued an executive order prohibiting relatives of the president from lobbying or interacting with US government officials, and he released a 92-page report that criticized Billy but refuted allegations of wrongdoing. The report even included excerpts of the president’s diary. His reaction was widely regarded as transparent and honest.

Billygate is a good point of reference when assessing what could be called Jaredgate. On April 10, the New York Times revealed that Jared Kushner, son-in-law and adviser of the 45th president, secured a $2 billion investment for his new private equity firm, Affinity Partners, from a fund controlled by the Saudi crown prince—even after advisers to the Saudi fund raised serious objections to the investment. The screening panel for the Saudi fund had cited “the inexperience of the Affinity Fund management”; an “unsatisfactory in all aspects” due diligence report; a proposed asset management fee that seemed “excessive”; and “public relations risks.” Yet the panel was overruled by the fund’s board, which is headed by Crown Prince Mohammed bin Salman, Saudi Arabia’s autocratic de facto leader, who, according to US intelligence, green-lit the operation that resulted in the assassination of journalist Jamal Khashoggi.

It’s damn hard to not see the $2 billion investment as either a payoff for past services rendered or a preemptive bribe should Trump manage to regain the White House. And it could be both. It’s a wonder that the disclosure of this deal hasn’t created more of a fuss and prompted congressional investigations. (Imagine what Republicans and Fox News would be doing if Hunter Biden received $2 billion from a Ukrainian government leader who was responsible for the gruesome murder of an American resident.) A 10-figure payment to a relative of a former president who is essentially the current (though undeclared) GOP frontrunner in the 2024 contest and possibly the next inhabitant of the White House is a major scandal.

Or it should be.

Mohammed bin Salman—often referred to as MBS—does owe Kushner a big thank-you. As the Times notes, “Kushner played a leading role inside the Trump administration defending Crown Prince Mohammed after US intelligence agencies concluded that he had approved the 2018 killing and dismemberment of Jamal Khashoggi.” And this investment seems unduly immense—not just because of the concerns raised by the screeners. The amount is twice as much and the terms of this deal are more generous than the investment the same Saudi fund made with the more experienced former Treasury Secretary Steven Mnuchin. Moreover, the MBS-approved investment comprises the bulk of the money Kushner has collected for Affinity Partners. He had been looking to round up $7 billion, but apparently few moneybags out there share the Saudis’ confidence in Ivanka Trump’s husband. Affinity Partners’ most recent filing with the Securities and Exchange Commission shows that it has raised only $500 million beyond the cash from MBS’s $620 billion fund, which maintains investments in Uber and the Newcastle United Football Club in Britain.

While he was a White House adviser to Donald Trump—on a host of wide-ranging matters, including Mideast policy, innovation, and the administration’s (deficient) Covid-19 response—Kushner forged a bond with MBS (who has yet to condemn Vladimir Putin’s horrific and illegal invasion of Ukraine). That included brokering $110 billion in arms sales to the kingdom and protecting these deals when MBS and Saudi Arabia came under fire for the murder of Khashoggi and for the brutal, Saudi-supported fighting in Yemen. It’s also possible that given all the Saudis’ global and internal intrigue—only a portion of which is known to the public—Kushner and Trump provided other valuable assistance to MBS.

Whatever the past or future quid pro quos, if any, this deal stinks and demands congressional scrutiny. Allowing foreign authoritarians to shower billions of dollars upon family members of past, present, or future presidents is ethically wrong but carries a greater threat. As Ali Al-Ahmed, the director of the Institute for Gulf Affairs, wrote in the Washington Post, “The prospect of a dictator using his deep pockets to wield influence at the highest levels of the U.S. political system should be cause for serious concern and targeted action. Not all attacks on American democracy will take the shape of violent insurrections—the corruption of the Saudi-Kushner deal is an attack on democracy, too.”

Last week, 30 House members wrote to Secretary of State Antony Blinken asking for a review of US-Saudi relations. The letter read in part:

A recalibration of the U.S.-Saudi partnership is long overdue in order to reflect President Biden’s important commitment to uphold human rights and democratic values in our foreign policy. Our continued unqualified support for the Saudi monarchy, which systematically, ruthlessly represses its own citizens, targets critics all over the world, carries out a brutal war in Yemen, and bolsters authoritarian regimes throughout the Middle East and North Africa, runs counter to U.S. national interests and damages the credibility of the United States to uphold our values.

These members have the power to examine the rotten-smelling Kushner-MBS relationship that far surpasses anything that Hunter Biden could have dreamed of. If Trump does run for president, this should be a campaign issue. With his son-in-law (and daughter) benefiting from a $2 billion sweetheart deal with MBS, the transactional gain for the Saudis from a second Trump administration could be huge. Will Kushner pledge to have no role—official or unofficial—with a Trump White House in the future? If he did, would anyone believe that?

The Trump cosmos is full of grift and scandal. And what’s $2 billion compared to an attempt to overturn an election and incite violent insurrection? But in a world of never-ending Trump sleaze, this shady venture does stand out as especially egregious. At the very least, Kushner deserves the Billygate treatment.