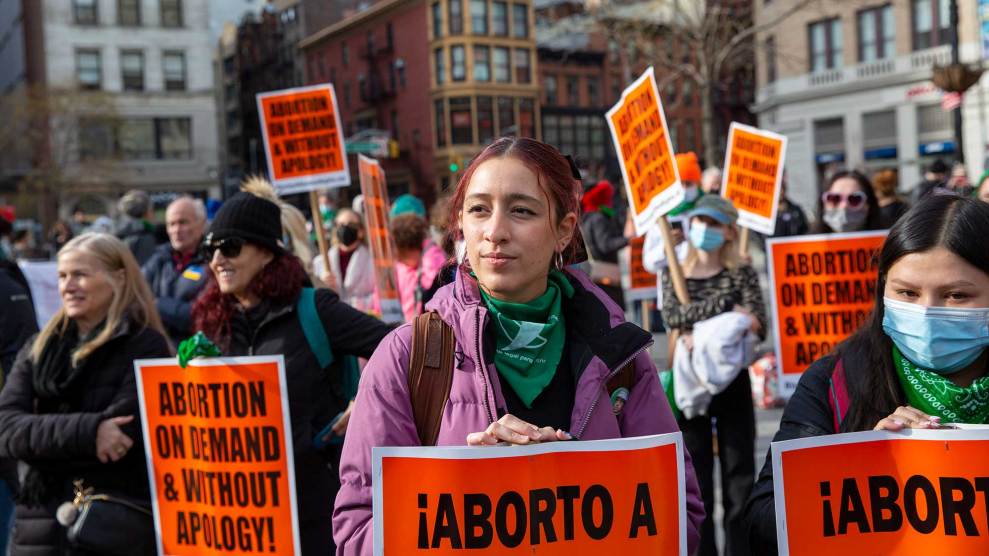 With Roe v. Wade at risk of being overturned by the Supreme Court, 2022 is shaping up to be a historically bad year for reproductive rights. And while anti-choice lawmakers have been working toward this for decades, they’ve only gotten bolder with their moves in the past few years.

If the court does away with Roe, 26 states will put in place bans or severe abortion restrictions, according to data from the Guttmacher Institute, a reproductive rights think tank. Meanwhile, emboldened by the passing of other abortion bans in previous years, Republicans politicians have passed abortion bans left and right this year, setting reproductive rights back nearly half a century: In the first four months of this year alone, lawmakers across 42 states introduced a grand total of 536 bills restricting access to abortions—86 of which effectively banned abortion outright.

So far, six states have successfully passed versions of these bans, and most of them look eerily familiar. It appears as those legislators are taking a page straight out of either Texas or Mississippi’s playbook: In 2021, Texas passed a law that prohibited abortions only after six weeks of pregnancy, while three years prior, Mississippi passed a law preventing abortions after 15 weeks of pregnancy.

The aftermath of these laws has been devastating. People seeking abortions in Texas have been forced to flee to other states—and sometimes other countries—to receive the procedure. Currently, there are eight states that have either banned or are attempting to ban abortions a maximum of 15 weeks after a pregnancy. Here’s a look at where they stand:

On March 30, Arizona Gov. Doug Ducey signed a bill that mirrors Mississippi’s, forbidding abortion after 15 weeks of pregnancy. The law also makes no exceptions for cases of rape or incest. “In Arizona, we know there is immeasurable value in every life—including preborn life,” Ducey said. “I believe it is each state’s responsibility to protect them.” The law will go into effect in late June.

(Apparently, “the immeasurable value in every life” doesn’t include trans children: Ducey also signed several pieces of anti-trans legislation this year, including a bill that bars gender confirmation surgery for minors and prevents trans girls from playing on girls’ sports teams.)

On April 14, Gov. Ron DeSantis signed the latest 15-week ban, one that has an exception only for medical emergencies—meaning victims of rape or incest would not be able to get an abortion. The law goes into effect on July 1.

Two weeks before Idaho’s six-week abortion ban was supposed to take effect, the state’s Supreme Court temporarily blocked it. The law allows the father, siblings, grandparents, and other extended family members of a fetus to sue the providers of an abortion up to four years after the procedure. If successful, the family could receive $20,000. On April 20,  the court allowed Idaho lawmakers to use their own private attorneys to defend their positions in the upcoming court case.

On April 14, Kentucky’s legislature managed to override a veto from the governor on a bill that bans abortions after 15 weeks. The only exception for abortion outside the 15-week timeframe is a medical emergency.

The ACLU and Planned Parenthood have filed lawsuits against the state, questioning the constitutionality of the law. Until the matter is sorted out in court, the state’s only two abortion providers have halted all procedures.

In 2018, Mississippi passed the 15-week abortion ban that started them all. The ban outlaws abortion in the state, with exceptions only for the mother’s life and fetal abnormalities. There are no exceptions for cases of rape or incest.

In December, the Supreme Court heard arguments about Mississippi’s law. The court is expected to hand down its decision in June.

On April 12, Republican Gov. Kevin Stitt signed legislation that makes performing an abortion illegal in Oklahoma. There are no exceptions in cases of rape or incest. If found guilty of providing an abortion, a person could face 10 years in prison and a $100,000 fine. Upon signing the bill, Stitt declared Oklahoma “the most pro-life state in the country.” The bill will go into effect in August.

On April 28, Oklahoma became the second state to pass a Texas-style abortion ban. Not only does it outlaw abortions after six weeks, it also encourages people to sue anyone who’s suspected to have help someone get an abortion. Like the Texas bill, there are no exceptions for rape or incest. If successful, a person could be awarded at least $10,000 for “for each abortion that the defendant performed or induced” or “that the defendant aided or abetted”.  The bill is heading to Stitt’s desk and will immediately go into effect immediately after the governor signs it.

On March 23, Republican Gov. Kristi Noem signed a bill that restricts the use of abortion pills, forcing a pregnant person seeking medication abortions to wait three days after an initial screening before getting their first dose of the two-dose regimen. The person would then have to schedule a third visit before getting their second and final dose. The law also bans abortions via telemedicine. Currently, South Dakota’s law is wrapped up in a federal court case and won’t go into effect until an injunction is lifted.

Texas’ absolute monster of a law not only bans abortions after six weeks, but it also does not include any exceptions for victims of rape or incest. The bill also encourages people to sue anyone suspected to have helped someone get an abortion, with the promise of a $10,000 award. Gov. Greg Abbott signed this bill into law in May 2021, kickstarting an entire slew of copycat bills across eight states.