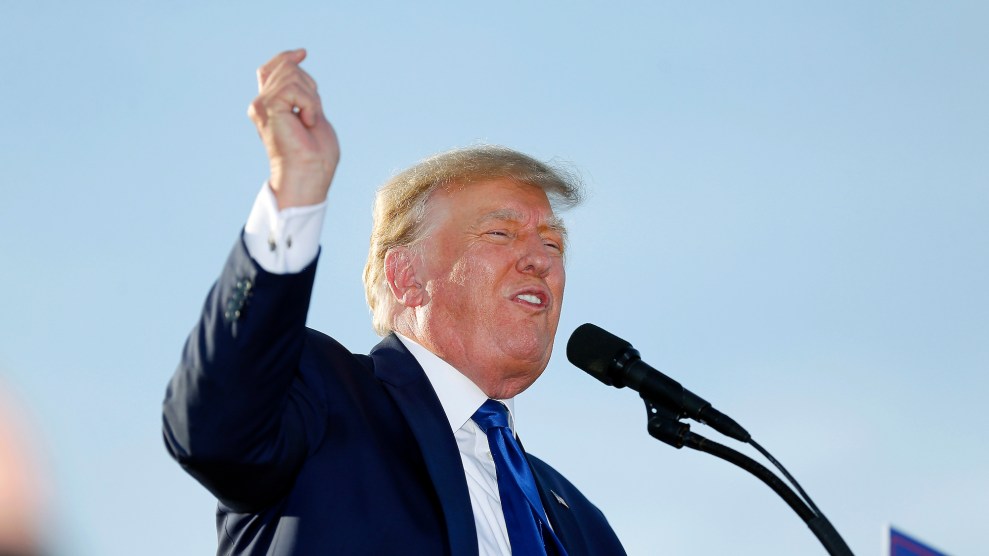 Former President Donald Trump speaks at the Save America Rally at the Delaware County Fairgrounds, Saturday, April 23, 2022, in Delaware, Ohio. The former president was in on hand to endorse Republican candidates and turnout ahead of the May 3 Ohio primary. Joe Maiorana/AP

New York state Attorney General Letitia James won a significant victory over former President Donald Trump on Monday, when the judge overseeing her civil fraud investigation into his company’s business practices ordered that Trump be held in contempt of court for refusing to turn over documents. James is investigating whether Trump and his company fraudulently raised and lowered the value of their assets to get better treatment from banks, insurance companies, and tax assessors.

James has presented evidence in court indicating that Trump and the company did present wildly different estimates of how much certain assets were worth, seemingly with little logical reason. Earlier this year, James subpoenaed Trump and the company, asking them to produce internal documents that show what role the former president played in the decision-making process for developing these varying valuations. According to James’ office, Trump has not produced “even a single responsive document.” Even before becoming president, Trump had a reputation as a micro-manager who loves to scrawl notes, often in his trademark thick Sharpie pen, and mark-up documents given to him. It has also become clear, however, that he also loves to rip-up notes he makes.

In their arguments seeking a contempt ruling against Trump, James’ attorneys said they believe there is a filing cabinet with documents that include files that have hand-written Post-It notes from Trump personally. James has also requested data from several phones that Trump was known to have used

In court on Monday, New York Supreme Court Judge Arthur Engoron sided with James, finding that Trump’s attorneys have not responded to the subpoena. And despite Trump’s attorney’s protestations that they searched and simply couldn’t find anything responsive, Engoron also ruled that they have they not backed that up by showing what kind of search they have undertaken.

“Mr. Trump, I know you take your business seriously and I take mine seriously. I hereby hold you in civil contempt and fine you $10,000 per day until you purge that contempt,” Engoron said at the hearing.

Trump has used stall tactics and been uncooperative with various investigators over the years and has fought lengthy and expensive legal battles to avoid paying money he owes business partners and vendors to his company. But Engoron’s fines could quickly accumulate. Trump’s attorneys say they will appeal Engoron’s contempt ruling.

Alina Habba, an attorney for Trump personally, told Engoron that her client doesn’t email and does not use a personal computer to type up anything or keep records. Habba said that she spoke to Trump personally to find out if he had any responsive documents and that he does not. However, she acknowledged, Trump did not sign an affidavit stating that.