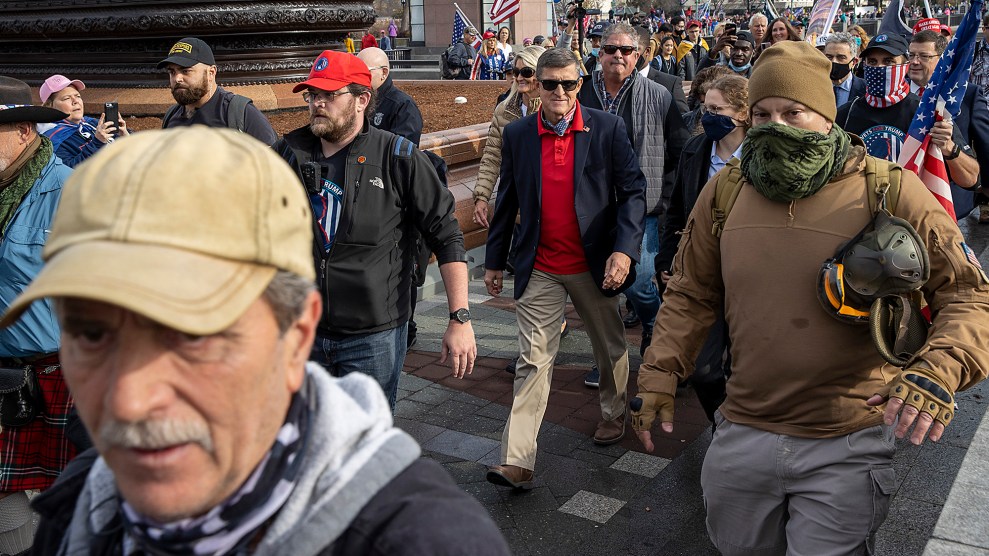 In a phone call last month, a member of a far-right paramilitary group warned an Arizona woman who gave congressional investigators information about the outfit’s efforts to push Donald Trump’s Big Lie that she might be hurt or killed if she continued to speak out.

“You always record what everybody says, and you put shit out there, and you follow people around and take pictures,” Michael Kenny, a member of 1st Amendment Praetorian, or 1AP, a shadowy group of former military members that has worked with former National Security Adviser Michael Flynn, told Staci Burk on the March 1 call. “You talk a lot publicly, and that’s what makes you a target.” Burk is onetime Republican activist who is now studying for her law degree.

“There was a number of people, you ruffled their feathers,” Kenny said moments later. “If you put anybody in jeopardy of prison time, or you know, if you might hurt them financially or whatever, people get edgy, you know? People don’t think clearly. You need to think about the easy way.”

Burk said that she considered this call, during which Kenny mentioned the possibility she could be murdered, a death threat. She reported the call to the FBI, she told me. She said it was the most overt of a series of threats she received after news outlets revealed that she was cooperating with the select committee investigating the January 6 attack. Burk recorded the conversation and shared the audio with Mother Jones.

Listen to Kenny’s call to Burk:

“I got scared,” Burk said of the call. Her unsettling conversation with Kenny caused her to briefly “pull back” from talking to the January 6 committee and reporters, she said, though she later resumed that cooperation.

Kenny, a trucker who said he previously served in the Navy and worked as a security contractor in Iraq and elsewhere, confirmed the call with Burk. He claimed, though, he did not threaten her but “simply stated” that her actions put her at risk. “If she thinks it was threatening, well then that’s her imagination working overtime,” he told me.

“If you put anybody in jeopardy of prison time, or you know, if you might hurt them financially or whatever, people get edgy, you know? People don’t think clearly. You need to think about the easy way.”

Burk, 47, has a wild story to tell. She is a former Gilbert, Arizona school board president who in 2020 helped to advance election fraud allegations in Arizona, including a claim that fake ballots had been flown into Phoenix. She provided an affidavit about the ballots to “Kraken” lawyer Sidney Powell, who was then preparing lawsuits challenging Biden’s wins in several states. A judge quickly dismissed a lawsuit that Powell filed in Arizona, describing it as stuffed with “gossip and innuendo.” A separate lawsuit Burk filed was also tossed.

Weeks earlier, as Burk joined in efforts to find voter fraud in Arizona, she been approached by members of 1st Amendment Praetorian, founded in 2020 by author and former special forces staff sergeant Robert Patrick Lewis to provide security to prominent Trump backers, including Flynn and Stop the Steal founder Ali Alexander, at rallies. Photos from a December 12, 2020 Stop the Steal gathering in Washington show Kenny acting as a part of a security detail surrounding Flynn and Stewart Rhodes, the founder of Oath Keepers, another far-right militia-style group. (Rhodes and 11 other Oath Keepers have been charged with seditious conspiracy and other crimes related to their actions leading up to January 6. He remains imprisoned in Washington as he awaits trial.)

After the election, Lewis has said, the group also began providing open source intelligence to Powell, who, along with Flynn, was sharing conspiracy theories directly with Trump. Flynn also called for Trump to deploy the military to seize ballots and voting machines and rerun the election.

According to Burk, in late November 2020, Flynn personally dispatched 1AP members, including Kenny, to her home to protect her against alleged threats resulting from her election fraud claims. Rotating teams of three to five group members stayed in her home through mid-January. Burk said she grew increasingly suspicious of the men, who she came to feel were effectively imprisoning her to assure she stuck by her allegations. She also began to suspect the supposed threats might have been faked by her supposed protectors. She began recording the men, as well as her phone calls with Flynn’s brother Joseph and a handful of ex-military figures who helped Michael Flynn promote election fraud allegations.

In text messages, Joseph Flynn did not directly dispute Burk’s account. “This is a non story,” he wrote. He also said: “Anyone that reads Mother Jones is mentally unstable. I do not wish to encourage their illness.”

Burk last year began speaking to reporters investigating events connected to January 6. Starting in August, she also participated in multiple interviews with committee investigators and turned over her audio recordings to the panel. “They were super happy to talk to me,” Burk said. “They wanted everything about 1AP.”

In January, the New York Times reported that the committee had obtained “numerous audio recordings of 1AP members and are trying to determine how they fit into the broader investigation.” The same day, Burk said, Kenny messaged her, renewing contact after several months of silence. Burk said she believed that Kenny was reacting to the Times report.

Kenny’s March 1 call, Burk said, came around the time that a news outlet sent out fact-checking inquiries to 1AP members and others for an article, not yet published, for which she acted as a source.

Kenny denied that he contacted Burk because reporters were sniffing around. He said that Burk “reaches out to me” and that he believes she is “probing me for information” about 1AP’s activities. Burk, however, provided a screenshot showing that Kenny had placed a call to her on March 1.

That March 1 call, which lasted just over 19 minutes, sounds relaxed at first. Burk and Kenny chatted about her dinner, a trucker convoy then approaching DC, Covid vaccines, and January 6. Burk noted how fearful she was on that day, given the threats she believed she faced at the time.

Then Kenny seemed to pivot. “It ain’t necessarily over,” he said. “Shit happens.”

“Don’t you think that if I was gonna get killed, I would have been killed by now?” Burk asked. Kenny responded, in part: “It just depends on what you do, you know? What you don’t do.”

“If they think you’re a threat, or it they don’t, might be the difference,” he added.

After discussion of an unrelated shooting by a police officer, Kenny steered the topic in a seemingly menacing direction. “What if somebody that that guy [the shooting victim] was pals with, or a family member or associate decided, ‘I don’t like the way that turned out. I think I’ll handle it myself?'” he asked.

“That could be painful,” Kenny added.

“What I’m saying is kind of an analogy,” Kenny responded. “The same thing applies to you as it does to that guy.”

Burk indicated she was still confused: “Like I ticked somebody off, so his friends could come after me?”

“If you ticked somebody off enough.” Kenny responded. “Just give it some thought. Let your imagination run away with yourself. I’m sure you can figure it out. You’re not stupid. You don’t need me to fill any gaps for you. You know exactly what I’m telling you.”