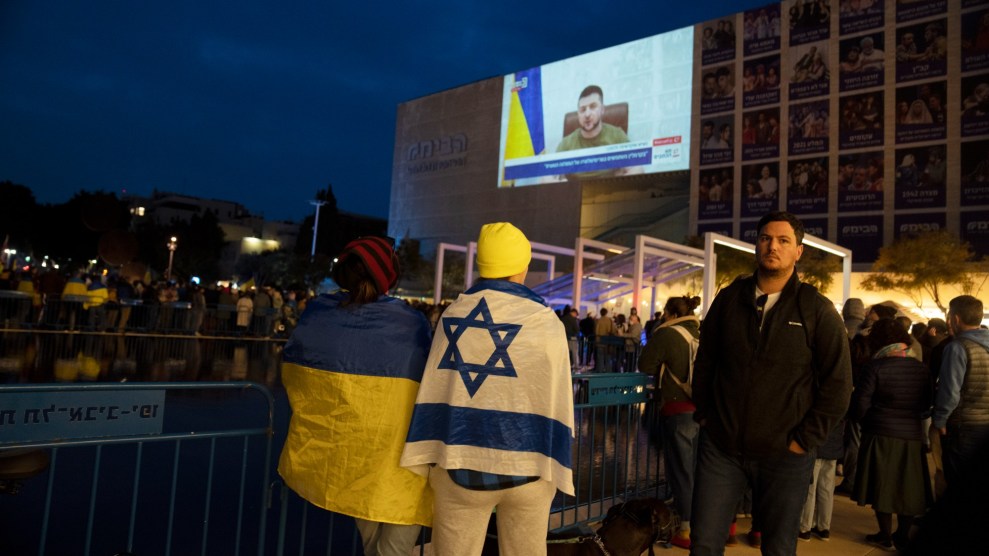 Few issues have united the Western world more quickly than Russian leader Vladimir Putin’s invasion of Ukraine last month. In response to his brutal war, the United States and its allies have shuttled weapons and aid to Ukraine and slapped severe sanctions on Russia.

These moves have received broad support internationally, but there have been a number of prominent outliers. India, which has close ties to Russia dating back to the Cold War, has been reluctant to criticize Putin, and China, which only weeks ago promised a “no limits” partnership with Russia, has played a crucial role in furthering Putin’s disinformation war. Then there is Israel, which has opted for a cautious approach that aims to satisfy both the United States and Russia. That careful balance has led to some awkward moments.

Shortly after Putin ordered the invasion of Ukraine last month, Israel did not support a US-led United Nations resolution condemning Russia. The decision reportedly annoyed the United States to the extent that US ambassador to the UN Linda Thomas-Greenfield passed along a message to her Israeli counterpart “stressing the Biden administration’s disappointment,” Axios reported.

Israel has a deal with Putin that allows it to strike Iranian targets in Syria. (Russia, which backs embattled Syrian leader Bashar al-Assad, is a significant power broker in the region.) “The US is our very important ally, but since the civil war in Syria we have had to deal with the Russians because they’ve become our neighbors,” Orna Mizrahi, a former Israeli national security official recently told the New Yorker. “It is so important for us that Russia turns a blind eye to what we have been doing in Syria, acting against the transfer of weapons, the entrenchment of the Iranians.”

In statements following the invasion of Ukraine, Israeli Prime Minister Naftali Bennett never explicitly condemned Russia and reportedly urged members of his cabinet to “keep a low profile” regarding any public statements about the conflict.  Bennett’s remarks to his cabinet came days after Israel Foreign Minister Yair Lapid seemingly broke from the protocol to condemn the “Russian attack” as a “serious violation of the international order.” Russia quickly took note of the Foreign Minister’s comments and summoned the Israeli ambassador in Moscow to explain the country’s position. Since then, Bennett has visited Putin and, with US support, has attempted to mediate an end to the conflict.

Adding to Israel’s role is a symbolic element other countries do not share. Putin has framed his invasion as a chance to “de-Nazify” Ukraine, a bizarre claim that runs contrary to Russia’s own support for far-right groups and the fact that Ukrainian President Volodymyr Zelenskyy is Jewish. He too invoked the Holocaust in a speech this week to the Israeli Knesset, using the phrase “final solution” to describe Russia’s actions toward Ukrainians. His comparison sparked criticism from some Israelis.

To better understand Israel’s position, I turned to Shalom Lipner, an Atlantic Council senior fellow who worked for seven Israeli premiers as a staffer in the Prime Minister’s office. He recently wrote an article entitled “Israel Needs to Make Up Its Mind on Ukraine” for Foreign Policy, in which he argued that the country has no “realistic choice” but to stick with “Team America.”

I spoke to Lipner this week about the Israeli response to Zelenskyy’s speech, how to characterize Israel’s role in resolving the war, and whether this affects the historic US-Israel alliance.

You wrote that Israel’s response to the Russian invasion of Ukraine had a “good cop, bad cop” component to it. What did you mean by that?

I meant that you have some different spokesmen saying things that would appear at times inherently contradictory. On the one hand, emphasizing sympathy towards the Ukrainian people without necessarily mentioning the Russians by name, and on the other, the foreign minister being openly condemnatory of Moscow.

Israeli spokespersons themselves have contested the idea they’ve been neutral. They would point to those condemnations, they would point to humanitarian aid. For example, Israel just established a $6.5 million hospital near Lviv. Polling has been very clear in the country and people are very supportive of the Ukrainian plight.

At the time when I wrote it, I actually argued that there isn’t really any sort of viability for a “good cop, bad cop” strategy anyway, because, these days, everybody hears everything that’s being said, from all parties at all times, so I don’t think you could actually transmit on different wavelengths.

Foreign Minister Yair Lapid and Prime Minister Naftali Bennett are actually from different political parties. Their coalition is based on a power-sharing arrangement where Lapid is scheduled to become prime minister after Bennett, right?

Yes, that’s right. They represent different constituencies that approach issues from different perspectives, but for the most part, when we see differences, it’s largely been contained. They’ve managed to come to a middle ground, and I don’t think we’ve seen a lot of dissonance, certainly, not internationally. You maybe see more differences on domestic issues. Both emphasize their desire to repair any frayed ties with the United States over the past decade as a result of polarization and partisanship between the two countries.

Israel is by far the number one recipient of US aid since the end of World War II. Their alliance has been a bipartisan feature of US foreign policy for decades. Why would Israel not immediately adopt the US position on this war?

I don’t think we see something here that conflicts with the American position. They’ve not gotten up and expressed sympathy for Putin, per se. What we do see is an attempt to inject nuance into the conversation as a reflection of Israel’s position in the region, and the things on its agenda.

We’re looking at a couple of things in that respect. First of all, Russia is a de facto neighbor of Israel, with an actual foothold just over the Golan Heights border with Syria, where Israel remains engaged in a long-standing conflict with Iranian proxies. That reality has necessitated a very high level of coordination over the past few years with Russian forces operating in that theater.

This is because Russia essentially controls that airspace, right?

It has been supportive of the Assad regime, which for the time being, at least, is in control of that territory. This all happens against the backdrop of what many other countries of the region see as this sort of increasing disengagement over the past few years by successive US administrations in the region. The Russians are being very active in terms of capitalizing on that opportunity.

“This all happens against the backdrop of what many other countries of the region see as this sort of increasing disengagement over the past few years by successive US administrations in the region.”

Despite, or notwithstanding, the differences on the Syrian frontier, the relationship that Israel has had, over many decades, with the United States is still a fundamental component in its national security doctrine. Nobody’s looking there to break ranks with the US or NATO or the West on these things

Another part of this that is difficult to ignore is symbolic. Putin has talked about “de-Nazifying” Ukraine. Ukraine has compared Putin to Hitler and invoked the memory of the Holocaust. How has that kind of charged rhetoric factored into Israel’s thinking?

I don’t know that it affects the formulation or implementation of practical policy, but it’s certainly something that has not escaped popular notice in Israel. I think there is an inherent discomfort with the use of all that imagery and terminology. People very much see the Holocaust as a unique event in history for reasons that have not duplicated themselves in this particular scenario—no matter how terrible it is.

You conclude in your article that Israel has no choice but to stay on “Team America.” Have we seen Israel orient its messaging on Ukraine to more reflect the US view recently?

I don’t think we ever saw anything that was contradictory to the American position. But I think we have noticed that, in terms of this mediation effort, for instance, Israel has closely coordinated with the US. It’s become clear that it wants to be seen as doing this with the tacit or maybe even apparent or manifest support of the United States and its allies.

It doesn’t want to be seen as a China or Russia in this situation?

The Israeli government doesn’t perceive itself as neutral. They do want to be seen as a credible mediator for the purposes of actually being able to facilitate some kind of resolution of this conflict.

I think that the leadership has tried to be responsible about this. They have taken criticism, like I said, from some people who have argued that is a neutral position. They argue that it is not a neutral position at all. They’ve been more visible in the humanitarian sphere. And Bennett spoke to Putin again, so you’ve certainly got that effort continuing. It wouldn’t be reasonable to expect Israel to jump ahead and discuss involvement that was of a larger scope than the NATO members who have a much larger capacity to deal with this kind of thing right now.

This conversation was edited for length and clarity.