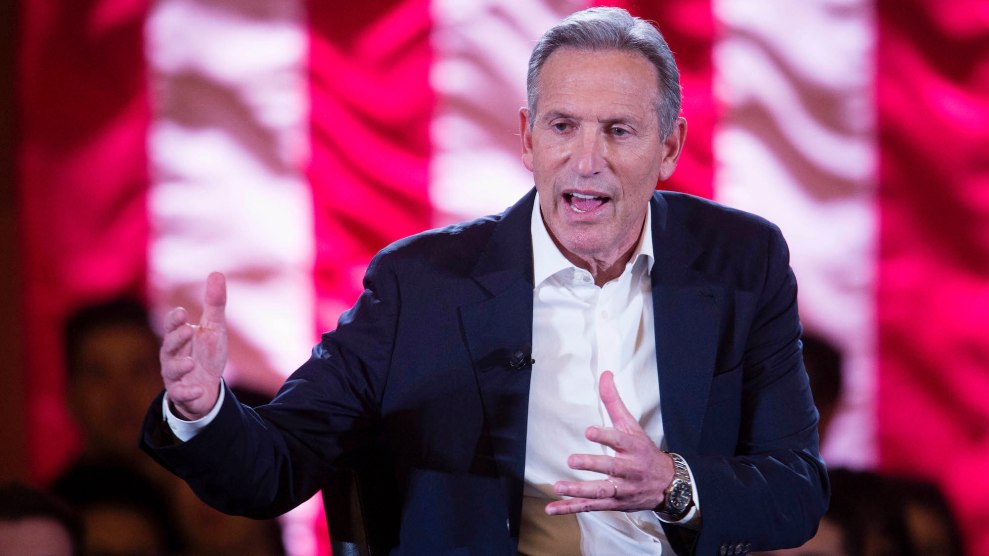 When companies are flailing, the founder comes back. It’s happened at Apple, at Tinder, and at Twitter. Now Starbucks is joining the list. On Wednesday, the company announced that CEO Kevin Johnson will retire and be replaced on an interim basis by founder Howard Schultz.

But unlike Apple and other tech companies that have reinstated CEOs, Starbucks is bringing back Schultz with company revenues near record highs. The crisis it faces is not a lack of profit, but a union drive.

Workers at 143 Starbucks locations across dozens of states have now filed for union elections. Workers United, the SEIU affiliate they are trying to join, has won six of the seven elections held so far. Those workers have won despite a union-busting campaign from Starbucks that has involved retaliating against pro-union employees, hiring dozens of high-paid lawyers to try to delay elections, and visits from top Starbucks officials to stores that have petitioned for union elections. Starbucks’ playbook hasn’t been working. Its leaders seem spooked.

Starbucks board member Mellody Hobson told CNBC Wednesday morning that Schultz is “singularly capable” of engaging with Starbucks workers. Hobson seems to mean that she believes he’ll be capable of stopping them from unionizing.

Starbucks board member Mellody Hobson explained that former CEO Howard Schultz is being brought back because he is "singularly capable" of dealing with the workers.

Schultz is a union-buster. 🧵 pic.twitter.com/L2tRTAghAw

Hobson told the Wall Street Journal that Johnson’s departure has been in the works for about a year, well before the union drive began. “It’s been deliberate,” she said. “This is not hasty in any way.” But Johnson’s retirement didn’t require bringing back Schultz.

If Schultz is singularly capable of dealing with workers, he’ll need to do a better job than he has so far. In November, he went to Buffalo to address workers from the stores that sparked the union drive. The speech created a backlash. Schultz, who is Jewish, told a story about how people forced on to trains to Nazi concentration camps shared the few blankets that were given to them. “So much of that story is threaded into what we’ve tried to do at Starbucks is share our blanket,” he explained. Most workers in Buffalo went on to vote in favor of unionization.

Forbes puts Schultz’s net worth at about $4 billion. Starbucks’ share price jumped after news broke that Schultz was coming back. Forbes estimates that he has made $115 million since Tuesday because he owns about three percent of the company. An entry-level Starbucks worker would have to work for more than 3,600 years to make that much money.

Schultz was long viewed as one of the “good capitalists” by progressive elites who cited things like the company’s above average health care benefits and the free college tuition offered to employees through a partnership with Arizona State University. His standing was so solid inside the Beltway that Hillary Clinton reportedly planned to make him secretary of labor if she had won in 2016.

Four years later, President Joe Biden picked Boston Mayor Marty Walsh, a former union leader, to be Labor Secretary after pledging to be the most pro-union president in history. Schultz, meanwhile, was no longer calling himself a Democrat. The times had changed. Now, much to Schultz’s dismay, Starbucks workers are changing them some more.