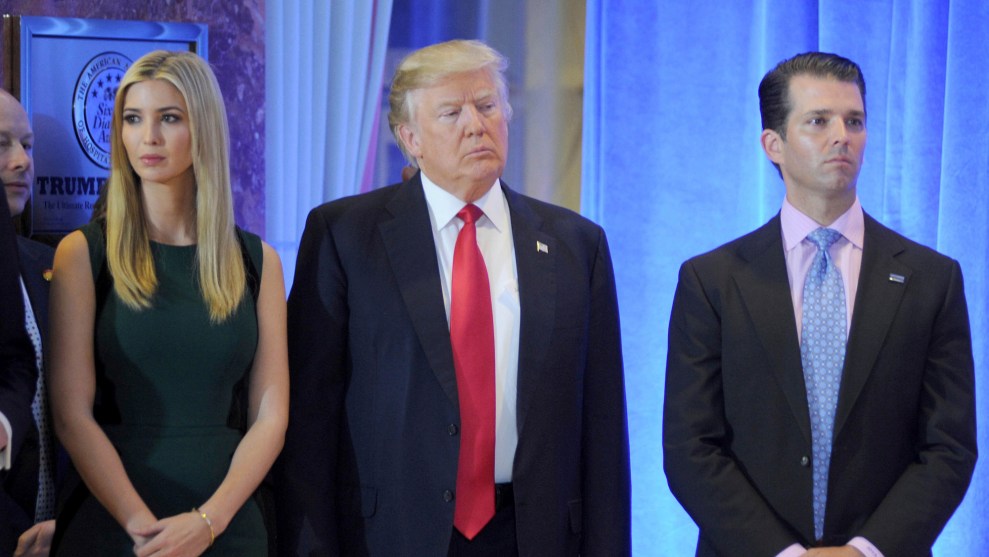 Donald Trump received bad news last week: Mazars USA LLP, the accounting firm he has used for years, broke up with him. The company sent a letter to the Trump Organization stating it could no longer work with Trump’s company, could not finish preparing his taxes this year, and was not willing to stand by a decade’s worth of financial statements it helped prepare. This was a major blow to the Trump Organization, which is the subject of two investigations in New York looking at whether Trump cooked the books on the valuations of his holdings. Mazars’ decision could help the Manhattan district attorney and New York State attorney general in their ongoing legal battles with Trump. It also could cause major problems for Trump’s firm in terms of dealing with current or future lenders (Trump is $590 million in debt). On top of this, the Trump Organization recently received another kick in the pants: a DC Superior Court judge added Trump’s company back to the ongoing Trump inauguration scandal lawsuit.

This case involves one million dollars in alleged grift related to Trump’s 2016 inauguration. In November, a DC Superior Court judge knocked out part of the case, which was filed in 2020 by Karl Racine, the attorney general of Washington, DC, and ordered that the New York City–based Trump Organization be dropped from the lawsuit due to jurisdictional issues. That left the Trump’s inauguration committee, a nonprofit known as the Presidential Inaugural Committee (PIC) with no current purpose, as the defendant. But on Monday, a new judge handling the case restored Trump’s company as a defendant.

This civil lawsuit alleges that the PIC misused charitable funds to enrich the Trump family. As Racine put it, “The Inaugural Committee, a nonprofit corporation, coordinated with the Trump family to grossly overpay for event space in the Trump International Hotel…The Committee also improperly used non-profit funds to throw a private party [at the Trump Hotel] for the Trump family costing several hundred thousand dollars.” The lawsuit essentially claims that one of the first post-election actions of the Trump crew was to illegally use the inauguration to make a buck—a lot of bucks.

The case is now expected to move toward a trial soon, and Ivanka Trump and Donald Trump Jr., who have each been deposed in this case, could end up on the witness stand. As Mother Jones previously reported, evidence submitted in the lawsuit indicates that Trump Jr. testified falsely on crucial points during his deposition. Ivanka, too, testified inaccurately during her deposition. If either is called as a witness in the trial, prosecutors could highlight these discrepancies.

According to Racine’s investigation, both Ivanka and Trump Jr. were involved in deliberations related to the alleged misuse of funds. The lawsuit maintains that Ivanka knew the PIC was being overcharged by the Trump Hotel in Washington, DC, for event space during the inauguration in January 2017. Filings show that during the organization of the inauguration, Stephanie Winston Wolkoff, a lead producer of the event, raised concerns with the president-elect, Ivanka, and Rick Gates, the committee’s deputy chair (who subsequently pleaded guilty to two charges stemming from special counsel Robert Mueller’s Trump-Russia investigation), that the Trump Hotel was overcharging the inauguration committee for events to be held there. Gates ignored the warning, the lawsuit notes, and the committee struck a contract with the Trump Hotel for $1.03 million, an amount Racine says that was far above the hotel’s own pricing guidelines. In legal filings, the attorney general pointed out that Trump, Trump Jr., Ivanka, and Eric Trump each profit from Trump Hotel revenues.

Racine also alleges that Gates, with Ivanka’s knowledge, “allowed the [PIC’s] nonprofit funds to pay for a private after-hours party for the Trump family at their Hotel, even after [the PIC’s] staff initially canceled this event over concerns of improper use of funds.” In a legal filing, Racine asserts that Trump Jr. played an instrumental role in the purported misuse of charitable funds for this private Trump bash. The event, according to Racine, cost $288,367.

The alleged details of the Trump inauguration scandal fit the pattern of the Trump family abusing the tax code and foundation funds for its own gain. But in November, it looked as if the family’s business had slipped out of Racine’s grasp. But now the DC attorney general will still get a shot to prove that Trump’s company is part of a kleptocratic enterprise.