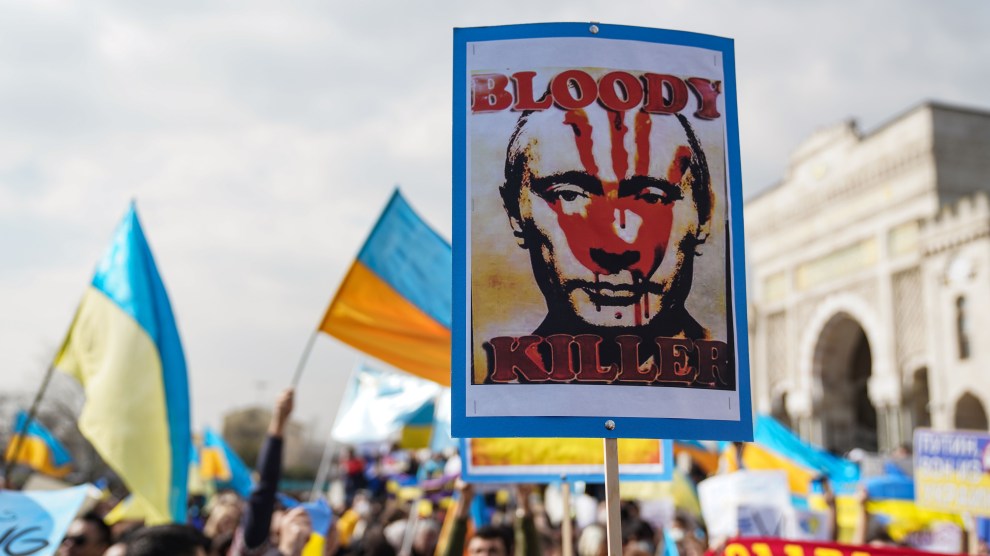 Calling Vladimir Putin a “strongman” has a long history and fresh meaning as blood is spilled in his name across Ukraine. In recent days, he has been called a “strongman” by the New York Times, Politico, CBS News, NBC News, MSNBC, the Nation, the Hill, and USA Today.

“Strongman” is a conjuring word. It’s concise and common, historically deployed to describe autocrats who rule by violence and see themselves, or want to be seen, as worthy of fear. In 2018, Time magazine ran a cover story headlined “The ‘Strongmen Era’ Is Here.” It claimed “a new archetype of leader has emerged. We’re now in the strongman era,” naming Putin for “making trouble in…Ukraine” and “embod[ying] an image,” he thinks, “of Russian virility and swagger.”

But historians are divided over whether the shorthand fits and whether it euphemizes, even venerates, authoritarian atrocity. “‘Strongman’ appears to be worthy of veneration by Trump and his acolytes. Not for me,” Noam Chomsky tells me when asked how the historian and linguist hears “strongman” today.

Ruth Ben-Ghiat, the author of Strongmen: Mussolini to the Present, tells me she uses the word for “authoritarians who damage or destroy democracy and use machismo as a tool of rule (along with violence, corruption, propaganda). I make it clear that ‘strongmen’ are actually weak and insecure individuals but they appear to [supporters in] their countries as saviors, defenders, sex symbols at times, and other male archetypes.”

Putin’s “personality cult,” she says, “which often has him shirtless, is used to present him as the embodiment of Russian ‘strength,’ and his crude and violent way of speaking Putinisms, full of threats, is part of that. So he fits the bill of ‘strongman’ 100 percent.”

But Nina Khrushcheva, an international-affairs scholar at the New School and the great-granddaughter of former Soviet Premier Nikita Khrushchev, tells me she isn’t so much concerned about whether the word is euphemistic as she is that it’s misplaced: “Putin was referred to as a ‘strongman’ back in the 2000s when he was a baby lamb compared to today…Putin now has gone far beyond being a strongman. He is a full-blown despotic, ruthless megalomaniac on par with Stalin and Mao, and proud of it.”

“Putin is far beyond strongman. He is a full-blown despotic, ruthless megalomaniac.”

“It is of course a useful shorthand,” she acknowledges, but “Putin is bombing a nation, of Ukrainians, that he says is the same as the Russians. That is truly Stalinesque, to kill one’s own people while declaring that it is for their own good and you are actually saving them. In George Orwell’s words, war is peace,” and weak is strong.

Katja Kolcio agrees. The Ukraine scholar at Wesleyan University tells me “the word ‘strongman’ is irresponsible, although most everyone would understand and not pause reading it. I don’t think ‘strongman’ is accurate when referencing Putin. His authoritarian and aggressive actions are a lashing out against his fears. And what he fears, more than NATO, is Ukrainian civic vitality and perseverance.”

“As a Ukrainian,” she says, “to me the courage it has taken Ukrainians over the past 100 years simply to claim Ukrainian identity, is greater than any power a government or ruler can wield over another. Strength is exhibited in honesty, patience, perseverance. It is not surprising that political leaders in Ukraine dating back to the 1800s, through Soviet times and independence and now, have been poets, artists, and those who insist on being themselves. This is strength.”

Sam Axelrod, a novelist and teacher at the University at Albany, SUNY, shares that view, pointing out how easily the label lends itself to flattery: “I imagine people hear ‘strongman’ and think it’s meant to be literal, or they don’t question the spin. The word inflates authoritarians’ ‘brand.’ It’s a ridiculous word.”

At the heart of this debate is a question less about shared vocabulary, or violence, than about how to deploy all tools available to expose harm. On Saturday, the Russian government banned media outlets from using the words “war,” “invasion,” and “assault” for Putin’s attack on Ukraine. Banning “war,” while waging it, is useful.

Putin is an autocrat, an authoritarian, a kleptocrat, a mafia leader, a pariah, a tyrant. Many labels fit. But in all other areas of life, when someone violates consent, he goes by several names. “Strongman,” even if he projects it, is usually not one.