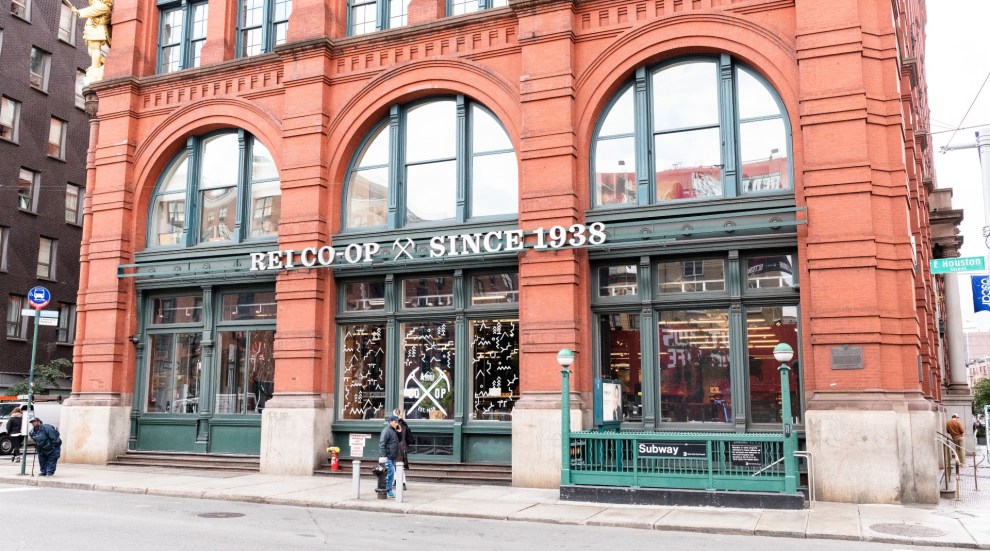 The SoHo REI store where workers have filed to unionize. LightRocket/Getty.

REI, the Seattle-based outdoor gear retailer whose name is practically synonymous with camping, doesn’t want you to think it’s anti-union. Unions are fine, a great choice for some companies; they’re just not for this company. In fact, REI seems to suggest, it doesn’t even need a union, because it’s already a co-op. “We are, at our core, a cooperative,” its newly created anti-union website gushes. “You are at the heart of our co-op, and your expertise, enthusiasm, and joy in helping members get outside make us who we are.”

In January, workers at REI’s store in Manhattan’s SoHo filed for union representation with the Retail, Wholesale, and Department Store Union (the same union Amazon’s Bessemer, Alabama warehouse workers are voting to join). The employees have criticized REI for laying off long-term staff when stores reopened after pandemic closures and allege a lack of transparency on Covid safety protocols. They also say wages are unlivable and that they’ve been working for 40 hours a week without health care benefits. In an online petition, workers claim the company has responded to the union by forcing them to go to anti-union meetings, putting up anti-union posters, and enforcing a freeze on promotions.

In an email to Mother Jones, REI wrote, “The team in SoHo are REI employees, first and foremost. They are a part of the co-op and that won’t change. However, the presence of union representation will impact our ability to communicate directly with those employees and resolve concerns as they arise.”

Emphasizing the word “co-op” is a clever rhetorical move on REI’s part: For many of us, the term evokes farmers’ markets and stands run by barefoot hippies. We’re probably thinking of worker co-ops, which are slowly becoming more popular throughout America—and REI probably knows the phrase has an appealing ring for outdoorsy, left-leaning consumers. In a worker co-op, the workers own the business, typically sharing profits in ways the worker-owners have reached consensus on.

That’s not what REI does. REI is a consumer co-op: a buyers’ club meant to give bulk discounts and better deals to customers. Technically, the consumers own the company, buying in with a $20 lifetime membership that includes benefits like an annual dividend on future purchases, exclusive sales, and the ability to vote for their board of directors.

And while those things are good—great, even—that cooperative model doesn’t guarantee worker protections. “What this anti-union campaign is doing is slyly using the politics of the word ‘cooperative’ to make it seem as though they’re a much more progressive entity than they actually are,” says Cedric de Leon, director of the Labor Center at the University of Massachusetts Amherst.

According to REI’s website—which promises “further education” and “open dialogue” about unionization—unions exist to collect dues, assess fines, and tell you to go on strike. In REI’s case, de Leon says, leaning on the co-op name is especially ironic: “Unions in a way are sort of cooperative organizations themselves, right? We collectively are going to get together, make the boss sit down with us, and negotiate a fair contract that treats us with dignity and respect. I mean, that is a cooperative ethic.”

REI’s position might seem odd for a company that is undeniably tied to the political left and uses its corporate voice to advocate for causes such as gun safety and preserving public lands. One previous CEO, Sally Jewell, was even tapped by former President Barack Obama to serve as Secretary of the Interior. But for a supposedly progressive company, its behavior is actually pretty par for the course. Call it rainbow-washing, pinkwashing, or greenwashing—many corporations will support social justice causes when it helps the bottom line, but not when it forces them to relinquish power. “When it comes to the workplace, and workers trying to organize for themselves and take more of the profit that would otherwise go to bosses for themselves, so that they can actually make a living wage… Well, that’s going a little bit too far,” says de Leon.

But REI has another option. It can decide to make good on its values by engaging both its workers and its consumer base in a more equitable way, says Melissa Hoover, the executive director for Democracy at Work, an organization that studies and advocates for the creation of worker co-ops. “I think the cooperative values and the cooperative identity should be a starting point to talk about ethical, values-driven business, not a substitute for workers’ rights,” Hoover says. “The values of the business itself can help retain those workers, if they extend in a material way to the benefit of the workers. That’s the charge for REI: to be able to hold both of those things at once to say, ‘We’re here to benefit our members but because we’re guided by our cooperative values, we’re also here to benefit our workforce.’”

What if REI really wanted to become a worker-owned co-op? With 15,000 employees, it would be by far the biggest in the country (currently, that title belongs to Cooperative Home Care Associates in the Bronx, with over 2,000 workers). Studies have shown that worker co-ops are just as stable as traditional businesses and often more efficient, all while increasing wages and opportunity for worker-owners. The Weaver Street Market chain in North Carolina has proved that it is possible for a company to be “community owned,” a model in which both employees and consumers have ownership. Such an idea is highly audacious, but REI could at least take a step in the right direction by allowing its employees the decency of holding a neutral election.

I asked REI representatives if they would consider expanding their cooperative, but they never answered. Guess they were opting outside, or something.