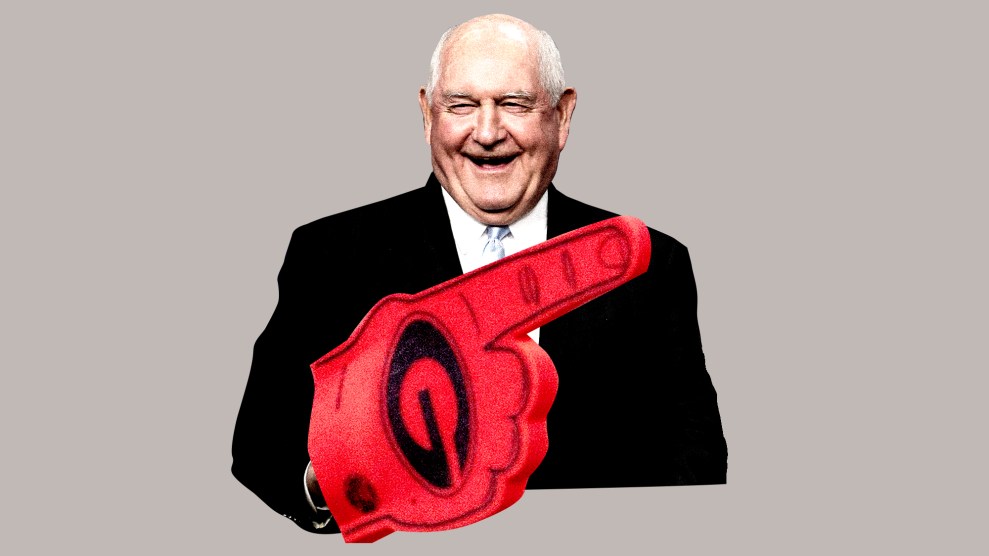 Last year, fresh from serving a full term as the Secretary of Agriculture during the Trump administration, Sonny Perdue began angling for another plum post: leadership of the University System of Georgia.

An agribusiness tycoon, Perdue is best known for his political work as a former two-term Georgia governor during which he urged on pay cuts for school teachers; expressed nostalgia for the Confederacy; pioneered voter-suppression laws; responded to a brutal drought by holding a public ceremony to “pray for rain”; and promoted policies that made life miserable for immigrants. While helming the USDA, he denied climate change (including taking time to bury publicly funded research on it); gutted a key federal agricultural-economic research institution; attempted to limit food aid; and cut farm worker wages at the height of the pandemic.

Why would he be qualified to head one of the nation’s premier public higher education systems? His career highlights don’t include anything related to university administration. Beyond Georgia, his tenure at the USDA was often about maintaining a fulsome reverence for Donald Trump. He even appeared at a Nov. 6, 2020, Georgia rally, where he echoed false charges of fraud in the states’ presidential election vote count. Yet this week, Perdue got his wish. After a months-long, drama-packed  process, over protests from faculty, students, and a university accreditation agency, the University System of Georgia board of regents has settled on Perdue as its sole finalist for the chancellor post, virtually ensuring he’ll get the job.

Regents are selected by the state’s governor, and most of the current ones serve courtesy of current Republican Gov. Brian Kemp. Kemp has vigorously advocated for Perdue’s ascension to the chancellor post, even though he’s locked in a bitter primary fight with Sonny’s cousin and business partner, David Perdue. All told, Sonny Perdue’s main qualification for this august job appears to be having long served as a political patron of Kemp’s. Back in 2010, at the end of Perdue’s stint as governor, he appointed Kemp as Georgia’s secretary of state—a normally elected position that had been vacated. The move minted Kemp as a rising star in Georgia politics, vaulting him on the path that would ultimately make him governor.

Tapping Perdue isn’t the Kemp-stacked board of regents’ only provocative recent act. Back in October, it voted to tweak its policies in a way that make it possible to fire tenured faculty without a dismissal hearing. The American Association of University Professors denounced the move as an “attack on tenure and academic freedom.”

With an enrollment 340,000, the University System of Georgia houses 26 schools including major research institutions the University of Georgia and Georgia Tech and three historically Black universities: Savannah State, Albany State, and Fort Valley State. What will it look like under a Chancellor Perdue?

In an interview with the Atlanta Journal-Constitution back in June 2021, in the heat of his push to grab the job, Perdue “spoke broadly about his desire to push conservative ‘values’ in the higher education system,” reporter Greg Bluestein recounted; and talked vaguely of guiding the university system through a “culture revolution” on the state’s college campuses.

If Perdue plans to turn the University System of Georgia system into a right-wing bastion, he’ll have plenty of support in the state’s legislature, says Scott Reynolds Nelson, the Georgia Athletic Association Professor of History at the University of Georgia and author of the new book Oceans of Grain: How American Wheat Remade the World. “Making Sonny Perdue chancellor won’t just undermine the research mission of the University of Georgia, it will also hamstring our teaching mission,” Nelson said. “His desire to move the USG in a more conservative direction is connected to a larger Republican strategy to tangle up universities with legislative fishing expeditions into everything we do.”

“Making Sonny Perdue chancellor won’t just undermine the research mission of at the University of Georgia, it will also hamstring our teaching mission.”

As an example of legislative escapades that might appeal to a Chancellor Perdue, Nelson pointed to a remarkable 11-page letter, dated February 4th and signed by Republican state Rep. David King, to current Acting Chancellor Teresa MacCartney. In it, King—writing in his capacity as chair of the subcommittee overseeing the state’s public higher-ed spending—expressed grave concern about “efforts represented as increasing institutional diversity, equity, inclusion, advocacy and activism” on the system’s campuses. “While the latter may be facially [sic] laudable goals, we have been informed these efforts in practice often result in inappropriate and/or misuse of state resources … potentially exposing the System to a range of negative consequences, including significant legal liability,” he continued.

The letter goes on to request that each of the system’s 26 schools turn over a list naming all employees who spend more than half their time “directly advancing, advocating, or supporting” a range of causes, including “social justice” and “anti-racism.” And it directs presidents of the system’s universities to make themselves available to appear in legislative hearings “in the event the subcommittee has questions regarding the information requested.”

While a chancellor interested in defending academic freedom might push back against such demands from the legislature, Nelson said, Perdue’s history as a right-wing political operator suggests he’s open to indulging them.

The King letter dropped amid a spate of bills in the statehouse designed to dictate what can and can’t be taught in the state’s public universities. One, introduced in  January, would ban the teaching, at all levels of Georgia public education, of “divisive concepts,” including the idea that the “United States of America and the State of Georgia are fundamentally or systemically racist.” Its sponsor, Republican state Senator Bo Hatchett, is tight with Perdue, who appeared at a campaign event for his re-election in December.

“The USG is in a perilous place,” says Matthew Boedy, an associate professor of English at the University of North Georgia and president of the Georgia branch of the American Association of University Professors (AAUP). “It has gutted tenure, and now we face a chancellor who buried climate change research, and whose best selling point as chancellor is he is friends with legislators who are currently trying to destroy academic freedom.” He added: “We need a chancellor who will defend higher education. Sonny is not that person.”