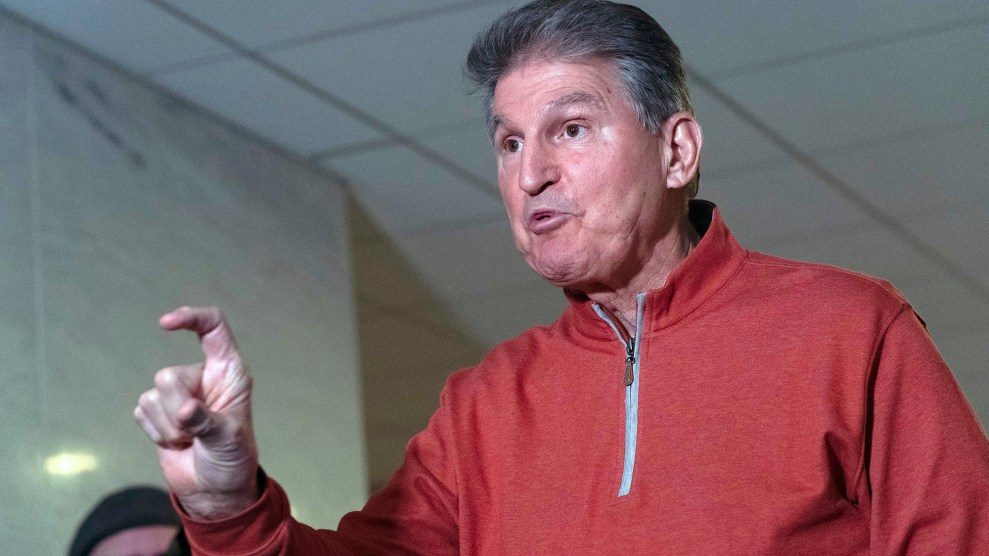 Within the brutal machinations of US politics, Joe Manchin has been elevated to a status of supreme decision-maker, the man who could make or break Joe Biden’s presidency.

Internationally, however, the Democratic senator’s new fame has been received with puzzlement and growing bitterness, as countries already ravaged by the climate crisis brace themselves for the US—history’s largest ever emitter of planet-heating gases—again failing to pass major climate legislation.

For six months, Manchin has refused to support a sweeping bill to lower emissions, stymieing its progress in an evenly split US Senate where Republicans uniformly oppose climate action. Failure to pass the Build Back Better Act risks wounding Biden politically but the ramifications reverberate far beyond Washington, particularly in developing countries increasingly at the mercy of disastrous climate change.

“He’s a villain, he’s a threat to the globe,” said Saleemul Huq, director of the International Centre for Climate Change and Development, based in Bangladesh. “If you talk to the average citizen in Dhaka, they will know who Joe Manchin is. The level of knowledge of American politics here is absolutely amazing, we know about the filibuster and the Senate and so on.

“What the Americans do or don’t do on climate will impact the world and it’s incredible that this one coal lobbyist is holding things up. It will cause very bad consequences for us in Bangladesh, unfortunately.”

The often tortuous negotiations between Manchin, the White House and Democratic leaders appeared doomed on December 19, when the West Virginia senator said he could not support the $1.75 trillion bill, citing concerns over inflation and the national debt. The latest twist caused anguish to those who see their futures being decided by a previously obscure politician located thousands of miles away.

If the US doesn’t slash its emissions, “the outcomes for countries like mine are unthinkable.”

“I’ve been following the situation closely,” said Tina Stege, climate envoy for the Marshall Islands, a low-lying Pacific nation that risks being wiped out by rising sea levels. “We have to halve emissions in this decade and can’t do it without strong, immediate action by the US.”

Stege said the Marshall Islands was already suffering the impacts of the climate crisis and if the US doesn’t slash its emissions “the outcomes for countries like mine are unthinkable.”

Even America’s closest allies have looked on in dismay as a single lawmaker from Biden’s own party has stalled what would be the biggest—and arguably first—piece of climate legislation in the US’s plodding, and often rancorous, history of dealing with escalating global heating.

“Biden has done a fair bit in very challenging circumstances [but] in Canada we look on with bewilderment because it’s such a different political context. It’s very bizarre,” said Catherine McKenna, who was environment minister in Justin Trudeau’s government that introduced carbon pricing in 2019. “Politics is hard but I don’t think anyone has given up. We just really hope they are able to get a deal.”

McKenna said she was vilified by some Canadian provincial premiers who “fought to the death” against carbon pricing but that there was now broader support for climate action across the country, including within industry, than in the US. “It’s unfortunate that it’s just one person that is holding up something that’s so critically important,” she said of Manchin.

“Joe Manchin is a problem, and I think he needs to be called out,” said Ed Davey, a British MP who was previously the UK’s secretary of state for energy and climate change. “It’s in the US interest, in the interest of West Virginia and elsewhere, to take advantage of green zero-carbon technology, which is the future.”

Davey, who is now leader of the Liberal Democrats, warned that the US risks ceding leadership in clean energy to China if it doesn’t act. “People will end up paying higher prices, jobs will go and not be created, the security of America will be reduced, Beijing will be laughing,” he said, adding that Manchin was in effect “working on behalf of the Chinese government” by not supporting the transition away from fossil fuels.

“Who is Manchin, the Dem senator from West Virginia who betrayed Biden?” the Italian paper La Repubblica demanded.

China used last year’s Cop26 climate talks in Scotland to “insidiously point out to every country that US just can’t implement”, said Rachel Kyte, dean of The Fletcher School at Tufts University and a climate adviser to the UN secretary general. Kyte said many governments believe Biden is well-meaning but cannot follow through on his commitments, a frustration compounded by a lack of American action on related areas, such as climate finance for poorer countries.

“There’s almost a resentment that the US just can’t deliver,” she added. “There’s this sinking feeling about the politics of America. You can’t turn your back on the US because it’s still the biggest economy, but what are countries supposed to do?”

Much of this angst is now being channeled towards Manchin.

After more than a decade in national politics, the 74-year-old senator has suddenly garnered a level of infamy far beyond his fiefdom of West Virginia, where the centrist Democrat has served as governor and senator while reaping millions of dollars through his personal investments and campaign contributions from a coal industry that continues to loom large in his state. It’s a situation that has caused bafflement overseas.

“Who is Manchin, the Dem senator from West Virginia who betrayed Biden?” La Repubblica in Italy has demanded. Clarín, a newspaper in Argentina, has called Manchin a “rebelde” and a “tycoon with ties to the mining structure of West Virginia, the other Virginia of the USA.” Helsingin Sanomat, a Finnish newspaper, also noted Manchin’s links to the fossil fuel industry and lamented that he has “disagreed with the most ambitious climate action” put forward by the US.

The negotiations with Manchin involve stakes far greater than any normal political maneuvering in Washington. The world is already being strafed by wildfires, heatwaves, floods and societal instability wrought by the climate crisis and rising temperatures are on track to breach limits set by governments in the Paris climate accords, a situation that would push some parts of the world beyond human livability.

“Sen. Manchin is a fossil-fueled sociopath on a Maserati joyride,” claims a Greenpeace spokesperson.

Salvaging this situation will be virtually impossible without swift action by the US, the world’s second largest carbon polluter and a major oil and gas exporter. Analysts say the half a trillion dollars of support for renewable energy and electric cars in the Build Back Better bill would give the US a decent chance of cutting its emissions in half this decade, which Biden and scientists say is imperative to avoid climate breakdown.

But Manchin’s opposition has already ensured the removal of a key element of the bill, a plan to force utilities to phase in clean energy over time, and the prospect of him joining Republicans to block the overall package has seen him come under intense criticism within the US.

Climate activists have confronted Manchin in Washington and kayaked to his yacht to remonstrate with him. Some fellow Democrats say he has “failed the American people.” Even the Sunday Gazette, the local paper of Charleston, West Virginia, has run a headline of ‘We need this so bad,’ in reference to the bill.

All this has been to little effect, although Manchin did say earlier this month there could still be agreement on “the climate thing,” offering some vague hope to activists while not quite quelling their anger. “Senator Manchin is a fossil-fueled sociopath on a Maserati joyride while he lets the world burn,” said Janet Redman, climate campaign director at Greenpeace USA. “At the end of the day, Manchin cares less about his constituents than he does about the fossil fuel industry.”

The current, floundering attempt to pass climate legislation is a grimly familiar episode in a lengthy record of American inadequacy. Donald Trump donned a coal miner’s helmet on the campaign trail and removed the US from the Paris climate deal. Barack Obama failed to get cap-and-trade legislation past a recalcitrant Congress. George W Bush rejected the Kyoto climate accords. In 1993, a previous Democratic senator from West Virginia, Robert Byrd, blocked a Bill Clinton plan to tax carbon emissions.

Manchin is, in some respects, a “fall guy” for a deeper American political dysfunction over the climate crisis, Kyte said. “If Republicans weren’t in the lock-grip of certain vested interests, if they had a policy on climate adaptation or green jobs for the future, Joe Manchin wouldn’t have the influence he has,” she said.

“Joe Manchin has become the personification of a problem and removing him doesn’t solve it.”

“Joe Manchin has become the personification of a problem and removing him doesn’t solve it,” Kyte added. “It doesn’t give us a bipartisan agreement of the danger we are in. A political culture that allows you to enrich yourself and your family from industries you regulate and not declare a conflict of interest lies beyond Joe Manchin, it’s bigger than just him.”

Even if American political inertia hasn’t changed, the world certainly has—the last seven years were the planet’s hottest on record, cataclysmic wildfires are now year-round events in the US west and deadly flooding swamps basements in New York, picturesque towns in Germany and subways in China. There is mounting fear that the world, including the US, does not have the time for yet another futile American effort to address the unraveling climate crisis.

“Unfortunately, politicians getting fossil fuel money are standing in the way and sacrificing the rest of us once again,” said Vanessa Nakate, a climate justice activist from Uganda. Nakate pointed out that Africa was suffering from climate change even though it is responsible for just a small fraction of global emissions.

“We are so reliant on the choices others make,” she said. “Our lives are literally in their hands.”