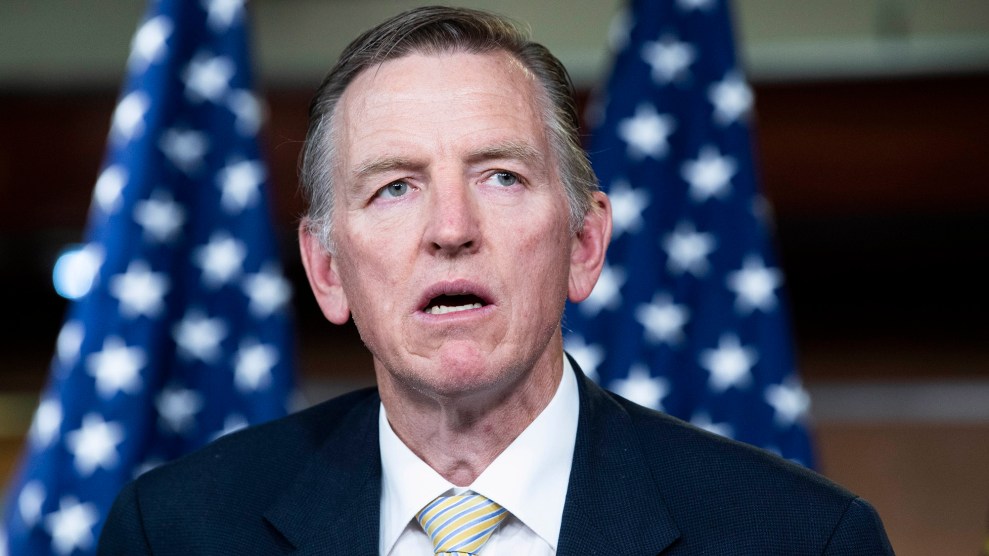 On Wednesday, the House of Representatives voted to censure Arizona Republican Rep. Paul Gosar and strip him of his committee assignments. First elected in 2012 after a long and not especially scandalous career as a dentist, Gosar has emerged from back-bencher anonymity in recent years as perhaps the chamber’s least subtle white supremacist.

Gosar has proposed a new caucus devoted to protecting “Anglo-Saxon political traditions” and promoted the racist “replacement” theory, which contends that an “invasion” of non-white immigrants will destroy America’s foundations. Gosar has been a superspreader of false election conspiracies and reportedly worked with the organizers of the January 6 rally on the National Mall that served as a launching pad for the insurrection. He has shared memes popular among Neo-Nazis, and after the Washington Post reported in February that Gosar had spoke at a white nationalist conference, he justified his attendance by saying they were “a group of young people that are becoming part of the election process, and becoming a bigger force.” In June, the same group announced that Gosar would be doing a fundraiser for them.

Gosar has said and done a lot of bad stuff, but Congress as a rule is a place where a lot of people are elected to say and do bad stuff. What prompted the push for censure was more personal: In early November, Gosar tweeted an anime meme depicting Alexandria Ocasio-Cortez, his Democratic colleague from New York, being murdered…by Paul Gosar. There is not really a normal time to do something like that, but this episode comes at a time when lawmakers are being inundated with death threats, and in the aftermath of a historic assault on Congress by members of Gosar’s political movement. Ocasio-Cortez, a frequent target of right-wing misogynists and recipient of death threats, has spoken about how terrified she was of what would have happened if Gosar’s fellow travelers had found her on January 6. That’s all pretty fucked up, even for a dentist.

Republicans have been down this path before in recent years with Rep. Marjorie Taylor Greene of Georgia (who was stripped of her committees this spring, in part for endorsing violence against Democrats in old social media posts), and ex-Rep. Steve King (who similarly aligned himself with white nationalists). Although several Republicans voted for the motion on Wednesday, the overwhelming majority of his caucus had Gosar’s back. He appeared to calm Republicans’ nerves at an internal caucus meeting this week. They are not looking for justice, after all; they are simply looking for assurances that one of their own can get his story straight so they don’t have to keep talking about it. In this case, Gosar has said variously that he didn’t actually watch the full clip he sent, and also that it was a “a symbolic cartoon” that was “in no way intended to be a targeted attack against Representative Cortez or Mr Biden.” Ideally, a reassurance that you were not threatening harm to a colleague would at least get that colleague’s last name right, but with Gosar, evidently, you grade on a curve.

This is only the 24th time a member of Congress has ever been censured. But episodes like this are exactly what the process is designed for. In another context, Gosar’s antagonism to his colleagues would simply get him fired, but the people who actually have that power—the voters of northern Arizona—aren’t the ones who have to work with him. Congress is “the people’s House,” as House Speaker Nancy Pelosi reminded her colleagues on Wednesday, but it is also an office. And Gosar, like Taylor Greene, has helped make the Capitol an increasingly hostile workplace—one in which lawmakers menacingly pack heat, coddle insurrectionists, and taunt colleagues still traumatized by the attack. The Capitol has traditionally been a sanctuary of sorts for over-performed collegiality—fraught in its own way—but the Trump years opened the door to a baser kind of politics, relishing in its impunity and unconstrained by anything resembling personal boundaries. You could make a good case Gosar is even getting off easy; after January 6, there were calls for the members who had egged on Trump’s coup attempt to be expelled—and few did as much to cheerlead that attempt as Gosar.

Gosar was not censured because of his views, as noxious as they are, but because of his inability to share an office with others. It was about “workplace harassment and violence against women,” Pelosi told her colleagues—a rebuke for crossing a line no one should have any trouble staying on the right side of. Her Republican counterpart, House Minority Leader Kevin McCarthy of California, invoked purported instances of Democratic misbehavior. Such whataboutism is a preferred tactic in cases like this, because it makes simple solutions seem intractable. But it doesn’t have to be that complicated. In singling Gosar out, Democrats were simply sending a message that if a 62-year-old man wants to conduct himself like a 15-year-old 8chan Nazi, then maybe he ought to be treated like one.