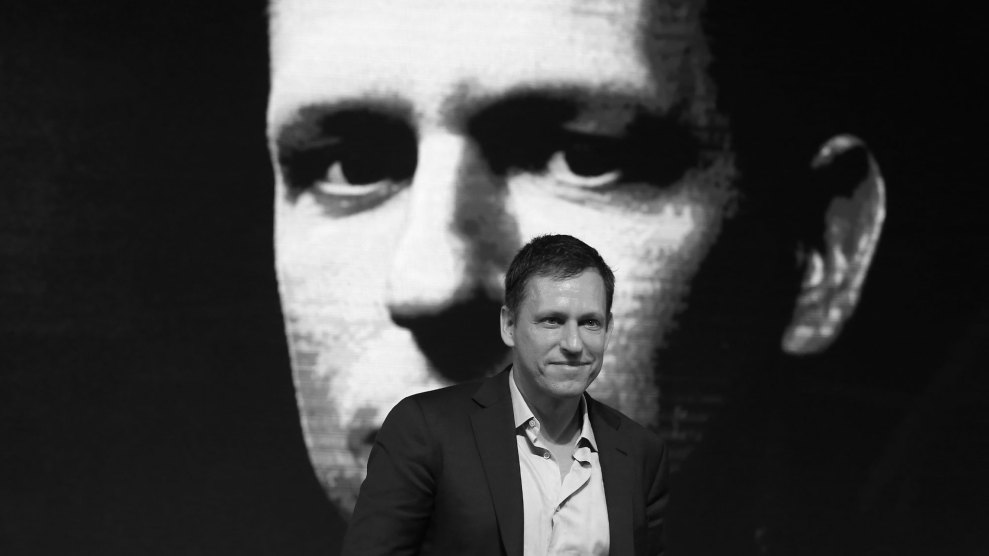 Editor’s note: This essay from David Corn first appeared in his new newsletter, Our Land. Given the importance of covering big money in politics and the move toward authoritarianism on the right, we want to make sure as many readers as possible have a chance to see it. Ourr Land is a newsletter written by David twice a week that provides behind-the-scenes stories about politics and media; his unvarnished take on the events of the day; film, books, television, and music recommendations; interactive audience features; and more. Subscribing costs just $5 a month—but you can sign up for a free 30-day trial of Our Land here.

New York Times columnist David Brooks recently got scared. Last month, he attended the National Conservatism Conference, held in an Orlando hotel, and reported in the Atlantic that this confab demonstrated that the right—of which he used to be a high official in good standing—has become a cauldron of End-Times paranoia posing as populism. The animating theme of this shindig did not arise from policy prescriptions or principles for contending with the nation’s economic or social welfare challenges or for pursuing a foreign policy in this confusing century. It was the notion that conservatives face eradication at the hands of diabolical leftists. As Brooks writes, “The idea that the left controls absolutely everything—from your smartphone to the money supply to your third grader’s curriculum—explains the apocalyptic tone that was the dominating emotional register of this conference.”

And the politicians there helped turn the event into a demagogic orgy. Sen. Josh Hawley (R-Mo.) barked, “The left’s ambition is to create a world beyond belonging. Their grand ambition is to deconstruct the United States of America.” Sen. Ted Cruz (R-Texas) hissed, “The left’s attack is on America. The left hates America. It is the left that is trying to use culture as a tool to destroy America.” Sen. Marco Rubio (R-Fla.) growled, “We are confronted now by a systematic effort to dismantle our society, our traditions, our economy, and our way of life.” This is what the right used to say about the Reds under our beds.

Brooks was particularly alarmed by a speech delivered by Rachel Bovard, the senior policy director of the Conservative Partnership Institute. He described her as a lovely person—cheery, amusing, and a lover of wine. Nevertheless, he noted, she was now a wigged-out extremist living in a bizarro reality. “Woke elites” want “to destroy us,” she told attendees. “Not only will they use every power at their disposal to achieve their goal,” but they have been at it for years, “dominating every cultural, intellectual, and political institution.” She warned of a “totalitarian cult of billionaires and bureaucrats.” And for this, she received a standing ovation.

Brooks was right to be apprehensive about this grievance-on-steroids festival and the conservatives’ embrace of an Orbán-like culture war in which they will deploy the power of the state to beat back the evil, Godless lefties. But his article left out a part of the conference that gave me the chills: Peter Thiel’s keynote address (which I watched courtesy of YouTube).

Thiel is, as you probably know, a Silicon Valley billionaire superstar who co-founded PayPal and Palantir Technologies, a controversial software firm that specializes in big data analytics and receives much of its revenue from government contracts. He is very pro-Trump. And his message to these angry conservatives was that there is now a ferocious battle going on between the forces of free thought and those of dogmatism. In a rambling speech, he offered what he called his “reflections on the incredible derangement of various forms of thought, political life, scientific life…in this country over the last few years and what we perhaps can do to counteract this derangement.” As he veered from one half-thought to the next, he presented three examples of what he had in mind: COVID-19, Afghanistan, and the Federal Reserve. Each of these subjects, he explained, demonstrated the dominance of wrongheaded and enforced consensus over dissent and individualized thinking. (I’m being more articulate than he was.) And what was scary about his talk is how simplistic his supposedly sophisticated analysis was.

With COVID in mind, Thiel observed that science “has become massively on the side of dogmatism, not enough skepticism…You see this with all the genuflections to science with a capital S.” His evidence? Here it was: “Masks first ineffective, then required.” That is, at the start of the pandemic public health experts did not advise mask-wearing, yet then they did. Of course, that switch occurred as more data came in on this new disease. Yet Thiel found this suspicious or capricious. Ditto, he said, regarding the shift in attitude toward the theory that the coronavirus originated in a Wuhan lab, a theory initially widely dismissed. “Now it’s probably correct,” he said. Uh, probably not. Thiel was billing himself as a brave dogma-buster, but he was pushing his own dogma.

On Afghanistan, he mentioned the chaotic withdrawal and argued that the true problem was that, for 20 years, no dissent to the policy was permitted. He had a point in that Democratic and Republican administrations lied to the public and pushed a consensus divorced from ground truth. (I recently explained this.) But there were plenty of attempts to challenge the dogma along the way. Presidents just ignored them. And Thiel demonstrated that he himself was more interested in promoting a political talking point than a thoughtful examination of a vexing policy matter when he held up a specific example of “a dissenting individual voice [on Afghanistan] that articulated the alternative in very clear terms”: Donald Trump. What did Trump do to challenge the conventional wisdom on Afghanistan? Thiel explained: “He said that Afghanistan was fundamentally and irreducibly a ‘shithole’ country.” Damn, that really changed things, right? And when Trump made this remark, he was mainly referring to Haiti and African nations in regard to US immigration policies. This was not an instance of Trump calling BS on the years of false assertions and faulty assumptions that led to the messy withdrawal in Afghanistan. It was Trump dumping on dark-skinned immigrants.

As for the Federal Reserve, Thiel, who was the first outside investor in Facebook, railed against this “most Deep State institution” without detailing the problem with it. He suggested that Fed fans were denying inflation has struck. But that’s not true. And noting that one of his “incredibly big misses of the last decade” was “not buying enough bitcoin,” he predicted that “fiat money”—currency created by governments—is “heading toward some crisis point.” (By the way, Thiel, an anti-tax champion who supports the idea of creating floating nations that would have no income taxes, exploited a middle-class tax break to gain a $5 billion windfall.)

After outlining these areas where dogma purportedly rules, Thiel asserted that part of the solution to the trouble at hand is “nationalism.” Mentioning his trip to the World Economic Forum in Davos in 2013, he contended that globalization produces the “worst mobs” threatening freedom of thought. And he called nationalism “a corrective to the sort of homogenizing brain-dead one-world state that is totalitarian and where there is no dissent and no individualism is allowed.” He spoke of a “globalist future in which individuals will not exist. It will just be some kind of a brain-dead borg.” Thiel’s nightmare is a Star Trek movie.

Thiel appeared to be advocating smashing the Fed, relying on crypto, and ginning up nationalism. And that’s not a surprise. His biographer Max Chafkin recently observed, “There’s always been a lot of libertarianism in Silicon Valley, but there are aspects of Thiel’s politics that aren’t libertarian at all; they’re closer to authoritarianism. It’s super-nationalistic, it’s a longing for a sort of more powerful chief executive, or, you know, a dictator, in other words.”

Thiel ended his talk with “a fantasy of mine of what victory would look like.” Please don’t try to guess. He continued, “I would like us to go back to a county in which we have ticker-tape parades for single individuals. We haven’t had such a ticker-tape parade in the 21st century. And individuals not just sports stars, not just individuals who might even be American, who might even be doing things that are changing society, asking dangerous questions, inventing things.” Is Thiel pissed off that the most recent ticker-tape parade in New York City was for essential workers who helped the Big Apple get through COVID? According to this list of parades, the last ticker-tape celebration in NYC that honored a single individual was for Nelson Mandela in 1990. But he wasn’t an American. Who does Thiel want to be the first person to be covered with confetti? Satoshi Nakamoto. That’s the pseudonym used by the still-unknown person who essentially created bitcoin. But there’s a catch. That person might be a group of people. Oh well.

There is nothing wrong about discussing whether a culture allows for thinking that challenges the status quo. A thoughtful and cogent address on the importance of dissent is always appreciated. But this was not that. Thiel’s keynote was only important because he’s a guy who has a sky-high pile of money he can use to underwrite right-wing groups and candidates. He funded a magazine that has published articles dismissing climate change and evolution, and in late 2016, having donated at least $1.25 million to support Trump, he recommended two climate change deniers to Trump to hire as his science adviser. (In his speech, Thiel made a disparaging comment about climate change: “When you have to call things science, you know they aren’t. Like climate science or political science.”) He financed the lawsuit that destroyed Gawker. And this year, Thiel has committed $10 million to help J.D. Vance, the once-anti-Trump Hillbilly Elegy author and venture capitalist who has become a pro-Trump troll and is running for senator in Ohio. Without all that moolah, Thiel’s quasi-ideas would be easy to dismiss.

Bovard’s speech was indeed frightening. It was full of venom, anger, and unfounded paranoia. Thiel’s presentation was far more disturbing…for billions of reasons.

You can watch for yourself: