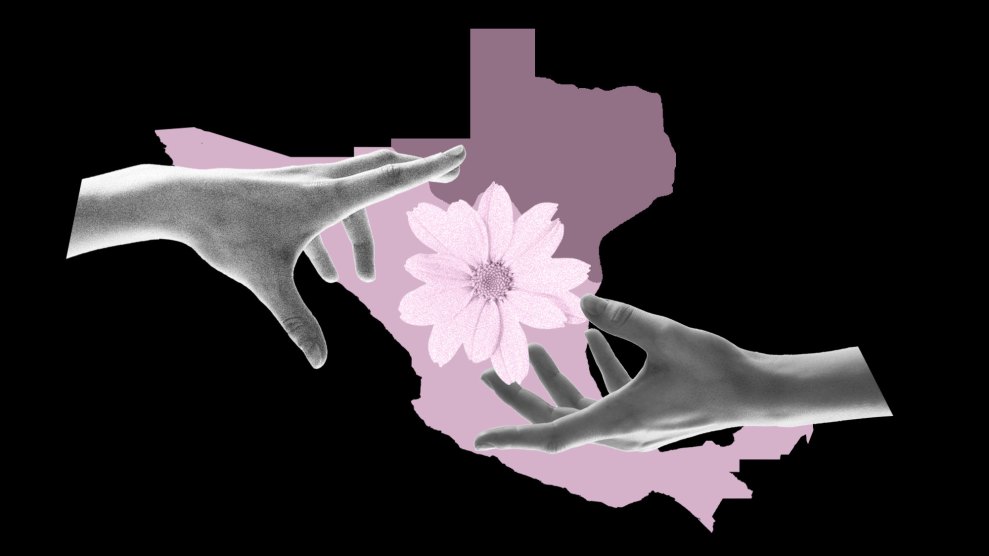 Twenty years ago, when MC was a teenager growing up in Tamaulipas, Mexico, she helped her friend get an illegal abortion. The two girls had heard about a local man who sold medications to end pregnancies, so they went together to meet him. He gave MC’s friend pills and a mysterious injection. It worked: MC’s friend’s pregnancy ended in a few hours.

But years later, when MC, whom I’m identifying only by her initials to protect her privacy, needed an abortion, she hesitated to return to the same man. She didn’t want to pay an astronomical fee for questionable medications. Luckily, she found an alternative: Through an online group, MC met an acompañante, an activist who guides people to abortion services. This acompañante, who was part of a small informal group in Tamaulipas, led her to a pharmacy and helped her select misoprostol—a drug that induces an abortion through a process similar to an early miscarriage—to safely end her pregnancy. Grateful for the help that the group provided, she learned tips from acompañantes to help others do the same. MC is one of 10 activists currently in the group, which is now known as AborTam.

AborTam is one of Mexico’s many underground networks that fill gaps in abortion services throughout the country. The activists say that these groups are vital, if covert, parts of the country’s health care system: Even though Mexico’s Supreme Court essentially decriminalized abortion last month, local anti-abortion provisions still dominate much of Mexico. Activists point out that there’s still a risk to Mexicans who seek or help others get abortions. In 28 Mexican states, local laws prohibiting abortion still apply. One NGO that works to free people incarcerated on abortion charges estimates it could take five years before these states catch up. Additionally, doctors in the country will be allowed to opt out of providing abortion services.

“We’re working on intensifying the relations that we have right now due to the need that’s been created by the restrictive laws in Texas,” said one activist in Mexico.

Mexican groups near the US border have been paying close attention to recent developments surrounding the criminalization of abortion and are gearing up to respond to increased need from people in Texas. In September, the state enacted SB 8, which bans abortions after six weeks, before many realize that they are pregnant. The law also allows private citizens to sue someone who helps a person get an abortion or performs the procedure beyond six weeks of pregnancy.

An activist with the Marea Verde network in Chihuahua, Mexico, which neighbors West Texas, said their group collaborates with networks in Arizona, New Mexico, and Texas. “More than anything, we’re working on intensifying the relations that we have right now due to the need that’s been created by the restrictive laws in Texas,” they said. “It existed before, but now it’s increasing and becoming more relevant.”

Abortion access for border residents has grown more restricted in recent years. In 2013, dozens of Texas clinics shut down in the wake of a law banning abortions after 20 weeks. The law created many hurdles: Clinics were required to meet the standards of ambulatory surgical centers; doctors needed to have admitting privileges at a nearby hospital; and the use of abortion drug RU-486 was restricted. As a consequence, clinics in the Rio Grande Valley dwindled down to just one, a Whole Woman’s Health in McAllen. In El Paso, out-of-state doctors would fly in twice a month to provide abortions in the border city’s only Planned Parenthood clinic. But when COVID-19 hit, the clinic stopped providing abortions for the region of 800,000, and the small percentage of patients they have from Mexico. “I think the state has really not left people in these communities very many options,” said clinic head Amy Hagstrom Miller.

A 2015 survey by the Texas Policy Evaluation Project found that among Texans ages 18 to 49, two populations were significantly more likely to have performed a self-managed abortion or know someone who did: Latinas living in a county bordering Mexico and those who reported that they had experienced difficulty obtaining reproductive health services due to barriers such as cost or transportation. The group also found that Texas-resident abortions in all border states nearly doubled after the 2013 law was implemented, and then decreased in 2016 after a Supreme Court decision overturned the regulations.

“More will look for our networks to be able to access their right to make decisions about their bodies.”

Clinics in neighboring states saw a similar uptick in patients from Texas in recent weeks. But for undocumented border residents, traveling out of the region by car is extremely risky, as it requires an encounter with Customs and Border Protection at an immigration checkpoint. Activists and politicians stress that some pregnant people will not be able to cross into Mexico without a passport or visa. “Now it’s time to work to help those who won’t have access to an attorney or don’t have the resources to obtain the legal assistance that they will need,” the activist said. “It’s still an expensive process.”

As Mother Jones reported, the mounting abortion restrictions in Arizona over the past decade have resulted in increased use of underground abortion operations. But crossing the border for abortions isn’t new: According to the Washington Post, the practice started between the US and Mexico around the 1940s. Back then, some in Juárez and Tijuana offered abortions mostly to US residents. Decades later, after a California anti-abortion campaign, a US abortion referral network started circulating “the list” in the late 1960s to help people find abortion providers. Although it included information for abortion providers and their fees in several other countries, including Japan and Canada, most people who used the list went to Mexico for their procedure.

Mexican abortion networks are expecting an onslaught in the coming months. Texas Gov. Greg Abbott signed another restrictive bill in September, declaring it a “celebration of Texas values.” Once the law goes into effect later this year, it will prevent physicians from administering medication abortions to people more than seven weeks pregnant and would prohibit prescribers from mailing abortion drugs to Texas.

“More will look for our networks to be able to access their right to make decisions about their bodies,” the activist said. “Without a question, this is one of the biggest setbacks on the full exercise of human rights.”