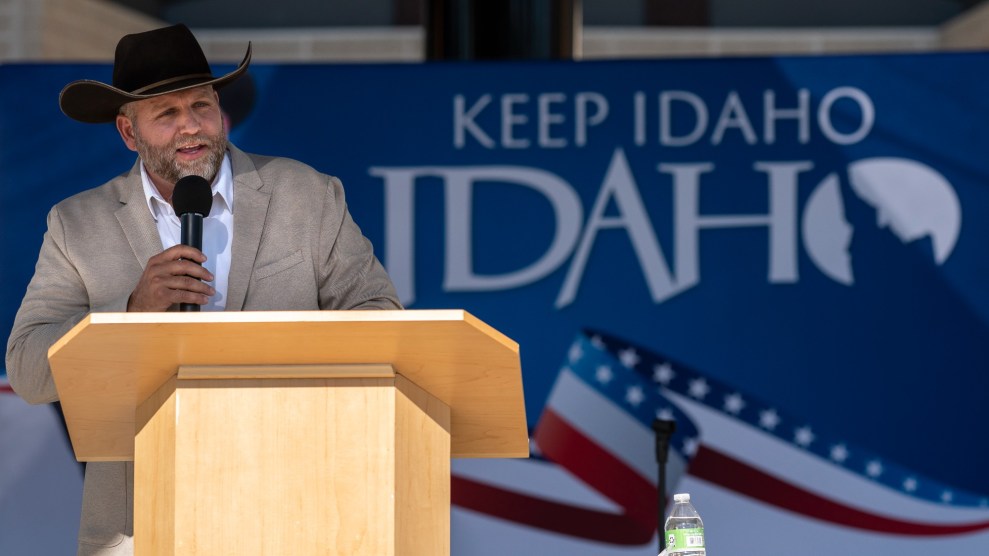 Ammon Bundy announces his candidacy for governor of Idaho on June 19, 2021 in Boise, Idaho.Nathan Howard/Getty

Anti-government extremist Ammon Bundy, who is running for governor in Idaho, is celebrating an endorsement from longtime Trump adviser Roger Stone—a step that unites what might seem like disparate strands of the American right.

“He is a renowned infighter, a seasoned practitioner of hard-edge politics, a veteran strategist and a political fixer,” Bundy said in a statement Sunday. “Roger Stone understands clearly the threat freedom in this country faces and is confident that I will not compromise in securing liberty for the people of Idaho.”

Boosted by anti-maskers, Bundy is waging a long-shot bid to unseat Republican Idaho Gov. Brad Little, who is expected to seek reelection, with a “Keep Idaho IDAHO” slogan and pledges to take illegal actions like immediately banning all abortions and seizing all federal land in the state if elected. Bundy led the 2016 occupation of the Malheur National Wildlife Refuge in Oregon and was involved in a 2014 showdown in Nevada pitting his father, Cliven Bundy, against agents from the Bureau of Land Management. Last year, he took part in an armed invasion of the Idaho state legislature related to COVID restrictions. But, as Stephanie Mecimer detailed in Mother Jones earlier this year, Bundy is also a seemingly earnest proponent of libertarian views. He had planned to join a Black Lives Matter protest in Boise last year, though it didn’t work out because he refused to wear a mask. And Bundy has damaged his own standing on the right by criticizing some of Donald Trump’s authoritarian tendencies—in 2018, he compared Trump to Hitler, and he has faulted January 6 rioters as “confused” and “Trump worshipping.”

Stone, a self-styled dirty trickster, is not earnest. Stone is a liar. In 2019, he was convicted of five counts of making false statements to Congress about his efforts to act as go-between for the Trump campaign and WikiLeaks in 2016. He was also convicted of obstructing a congressional investigation and witness tampering. Trump pardoned Stone late last year, just as Stone was promoting Trump’s efforts to use lies and anti-democratic means to remain in power. Stone amplified Trump’s false claims about election fraud and mingled with Proud Boys and Oath Keepers, including several who are now facing conspiracy charges for the January 6 attack. Stone also raised money for “security” for the January 6 protest and urged Trump backers to help stop Congress from certifying Joe Biden’s electoral win that day. “This is nothing less than an epic struggle for the future of this country between dark and light, between the godly and godless, between good and evil,” Stone said in a January 5 speech in Washington. “And we will win this fight or America will step off into a thousand years of darkness.”

Stone is a hustler who currently earns a living by peddling his brand as a hard-edged Trump booster and libertine at various far-right conferences, where he calls Trump “the greatest president since Abraham Lincoln.” Ammon Bundy, by contrast, offers himself as a true believer, a family-man, a Mormon devotee, and a committed ideologue who is willing to go to jail—or to cause the cancelation of his son’s football game by refusing to wear a mask.

But as Mecimer notes, Bundy is “oblivious or indifferent” to the reality that he is enabling right-wing fans who do not share his scruples. Bundy practices nonviolent resistance. But he doesn’t always advocate that others follow suit. “I’m worried about violence not being used when it should be used,” he said. “Violence is not necessarily a bad thing when it’s used correctly.”

Betsy Gaines Quammen, author of American Zion: Cliven Bundy, God, and Public Lands in the West, told Mencimer that Bundy has “tapped into a very angry group of people who, like him, think they’re victims. He told me very clearly, ‘I’m not the conspiracy theory guy, I’m not the QAnon guy.’ But what he is is this guy who is helping with cross-pollination. He’s got the militia people, the anti-vax people, the people who are pro-Trump no matter what—even though he isn’t. These are the guys that Ammon is inspiring.”

A pardoned felon and former adviser to a disgraced president endorsing a long-shot candidate in Idaho doesn’t matter much on its own. But Bundy is continuing to cross-pollinate, uniting with Stone—and the authoritarian Trumpism he has faulted in the past—in a far-right coalition that includes some of the most extreme elements in American politics. That’s more than a little scary.