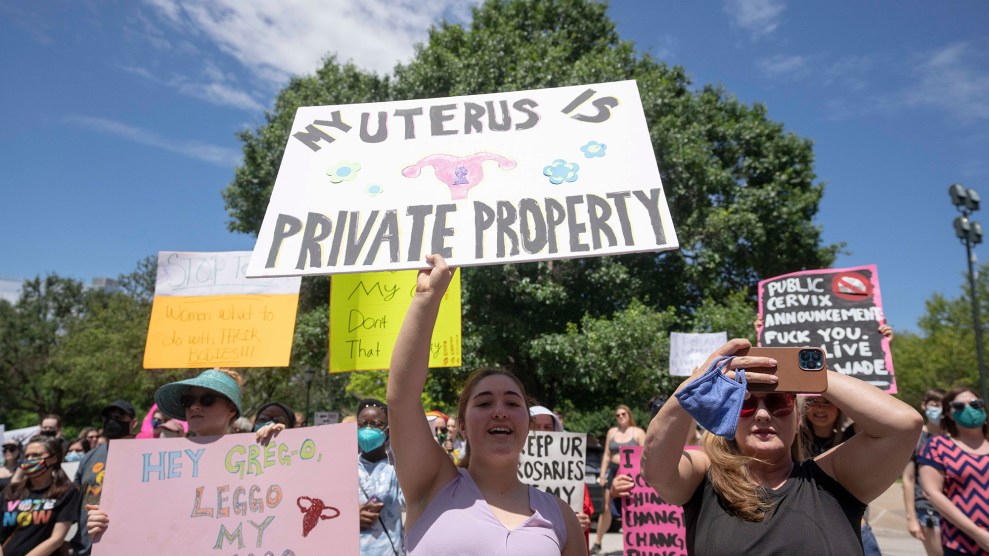 Senate Bill 8, the Texas law that effectively bans abortions in the state by criminalizing any procedures after six weeks, is a bad law, not just in the sense that it accomplishes a bad thing—by effectively depriving women of their formerly constitutionally protected rights—but in the sense that it was written with all the legal authority of a ransom note. The law, in addition to the ban itself, proposes to enforce this prohibition by creating what Justice Sonia Sotomayor describes as “citizen bounty hunters.” Private citizens can earn $10,000 by filing a lawsuit against anyone who has so much as offered a ride to someone else to get to an abortion clinic in Texas. Unlike traditional litigation, a plaintiff in one of these cases would not need to demonstrate that they have been harmed to receive this fee. It’s simply a harassment stipend; if you see something, we’ll pay you something. When the law passed the legislature this spring, even some of its own supporters thought it might be unconstitutional.

But SB 8 was not the only major piece of legislation that came out of the Texas legislature this year. On Wednesday, the Houston Chronicle helpfully rounded up other bills that have gone into effect or will soon. It is not pretty:

It could be worse, I suppose: They could have put a $10,000 bounty on the restaurant owners and history teachers, too. This is a strange list, but as a mission statement of what the conservative movement is and isn’t for in 2021, it is quite coherent. The sum of these measures is an endorsement of governance as a display of cultural dominance, rather than governance as a means to make anything work better for anyone. And there is so much that doesn’t work.

Earlier this year, I wrote about how the animating ethos for much of today’s Republican Party was shitposting. The movement’s most ambitious figures, interpreting the wishes of their voters, seem more interested in the appearance of governing than in the real thing. They do loud, visible things, and spend way too much time on social media. They want what their base wants, which is to put other people in place, and they seem little interested in anything else. They pass blatantly unconstitutional laws to score a point or lodge ridiculous constitutional challenges of their own just to be seen. And then sometimes the Supreme Court just decides to let them have their way anyway, because the justices came out of this same movement too—that’s why they’re there, after all.

While the Texas legislature was doing all of those things, it was also not doing other things. It did pass a set of reforms designed to correct some of what ails the Texas power grid—such as requiring power companies to weatherize their plants—but declined, for instance, to authorize any money to pay for it or apply the same mandates to the natural-gas industry. And any improvements are not expected to be in place before 2022. The state government’s major response to the fourth wave of the coronavirus has been to strip local authorities and private businesses of their ability to do anything about it, in order to score nihilistic culture-war victories over masking and vaccines. Texas is, statistically speaking, one of the worst places in the United States to give birth, but the state’s leaders would still rather turn away free money from Washington than spend it on health care for poor people.

When the Atlantic’s Emma Green asked Texas Right to Life’s legislative director, John Seago, whether the group would advocate for Medicaid expansion to ensure that women have access to health care during and after pregnancy—supporting Medicaid expansion while limiting abortion access is the position of the governor of neighboring Louisiana—he demurred.

“We have to be mindful of our political atmosphere and what is possible,” he said.

The political atmosphere in Texas is one that Texas Right to Life, and groups like it, have spent decades creating. These activists and organizations remade the federal judiciary, swung state and national elections, and changed what kinds of lives individual citizens are allowed to live. As I read up on the law, I was struck by the sick sort of irony of the bounty mechanism. For several decades, one of the most powerful forces in the state’s politics was a group called Texans for Lawsuit Reform. Though officially nonpartisan, TLR helped Republicans cement their grip on the state by lavishing campaign funds on candidates who supported tort reform—a favorite issue of the state’s conservative business leaders. Well, here we are now, staring into the abyss of conservative social policy and frivolous lawsuits all the way down.