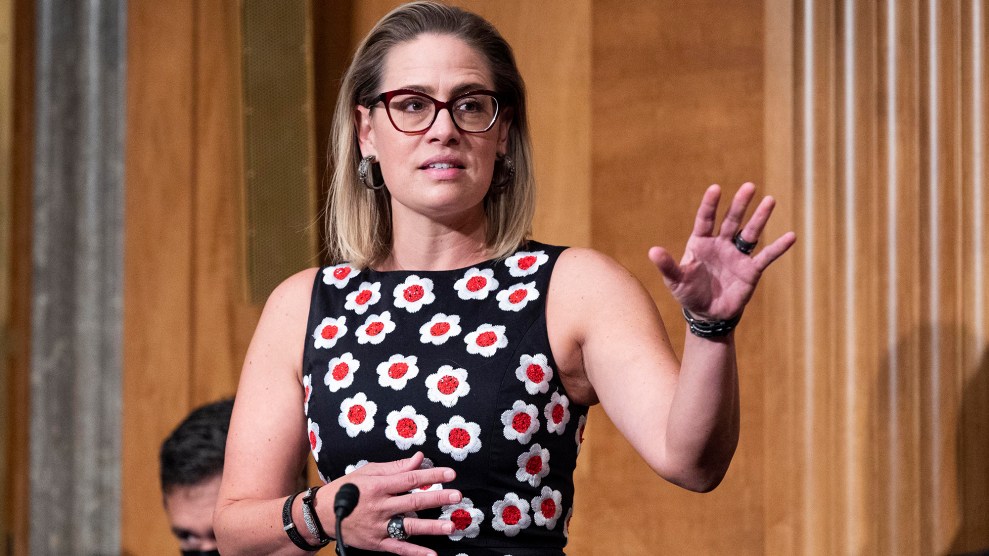 It’s happening again. On Sunday, Politico reported that Arizona Sen. Kyrsten Sinema is opposed to her colleagues’ plan to regulate the price of prescription drugs—and voiced her disagreement at a recent meeting at the White House with President Joe Biden.

Democrats have little margin for error on virtually anything that passes through the Senate, which makes Sinema’s stance a difficult one for the party. The plan to reduce drug costs by allowing Medicare to negotiate with pharmaceutical companies was supposed to be a key part of the major Biden-backed spending bill—essentially an omnibus of the president’s major domestic policy priorities, from climate action to immigration—currently making its way through Congress. The drug plan would save the government a ton of money—helping to cover the costs of the rests of the bill—but more significantly, it’s an enormously popular idea that would make a lot of people’s lives better.

For all of those reasons, lowering the cost of prescription drugs has been a core Democratic priority (at least on paper) for years. Even Donald Trump recognized the value of at least saying he supported lowering drug prices, though he did not particularly care whether it actually happened. Democratic opponents of the plan have tried to cast themselves as moderates—problem-solvers just searching for a pragmatic middle ground. But in drawing the line on drug-pricing, they’re revealing themselves to be the caucus’ true radicals.

Sinema is not alone in opposing her party’s prescription-drug push. Last week, a small group of House Democrats—all of whom had previously voted for the exact same proposal—announced their opposition, stating variously that reducing pharmaceutical company profits would curb innovation, and that, In These Uncertain Times, Congress should strive to pass measures that are bipartisan. Those members proposed an alternative measure, which would only curb the prices of certain drugs that have already been on the market for a while. It was the sort of token plan you offer so that no one can accuse you of not having one. Sinema, as Politico notes, doesn’t support that plan either.

Lowering drug costs is such a popular idea, though, that opposing it actually puts these members far out on the political fringe. According to a recent Kaiser poll, 88 percent of Americans support it. It is pretty hard to find an idea that’s as popular in American politics. (Apple pie clocks in at just 81 percent.) Lowering drug costs should be a “moderate” sweet-spot—a reform that delivers tangible benefits to an engaged political constituency (old people, mostly) without blowing up existing systems, all while bolstering your talking points about thriftiness. Lots of Democrats in tough districts are dying to put this issue in their mailers next year; lots of Democrats in tough districts won those races while campaigning on exactly this.

But there is one constituency that very much backs these holdouts—the pharmaceutical industry, which is already running ads in Sinema’s defense and has given her nearly $400,000 since 2017, according to the Center for Responsive Politics. Rep. Scott Peters, a California Democrat who has come out against the measure, has received more money from pharma this cycle than any other member of the House. For another holdout, Rep. Kurt Schrader of Oregon, Pfizer is not just one of his largest contributors, it is also the source of his family’s fortune. Rep. Kathleen Rice, the other holdout, has received far less money from Big Pharma, yet still seems more than happy undercutting her old campaign ads:

In Congress, I've always put the health and safety of Long Island first. Whether it meant securing billions of dollars in aid for New York during the pandemic, taking on drug and insurance companies to lower the cost of health care, or protecting a woman's right to choose. #NY04 pic.twitter.com/bAUpdDGJW4

Sinema is also engaged in a sort of a staring contest with other members of her party over the infrastructure bill she helped broker an agreement on, which is supposed to come up for a vote in the House next week. She has threatened to block a vote on the big reconciliation package (of which drug-negotiation is a part) if that infrastructure bill doesn’t pass the House, while House progressives are threatening to block the infrastructure bill if she won’t back the larger domestic priorities bill. So any stray commentary on what she will or won’t support has to be read through the lens of this weird and ongoing Capitol Hill power play.

In this case, Sinema’s office has said it won’t comment on individual pieces of the budget bill. But the clash over drug prices is clarifying. There’s a traditional tendency by people like her to present their opposition as some sort of savvy and practical number-crunching—a sober rejoinder to those progressives always asking for more money. A recent Axios story reported that Sinema had started making her own spreadsheets to help her find flaws in the multi-trillion-dollar budget bill the drug-pricing scheme was supposed to be a part of. Someone looking for savings wouldn’t take the hatchet to the item that’s going to produce lots of savings, and someone thinking of the political middle wouldn’t chop away at the thing that the political middle loves.

Sinema understands the appeal of the bill as well as anyone. Just take a look at her campaign messaging:

We need to make health care more affordable, lower prescription drug prices, and fix the problems in the system – not go back to letting insurance companies call all the shots. #AZSen pic.twitter.com/rlGiOGyeBf

Health care is on the ballot this election. Protections for Arizonans with pre-existing conditions, Medicare improvements and prescription drug costs for seniors, and coronavirus relief all hang in the balance.

Visit https://t.co/fh2oSbQ0BY and make sure your voice is heard. pic.twitter.com/BysXRpdCSh