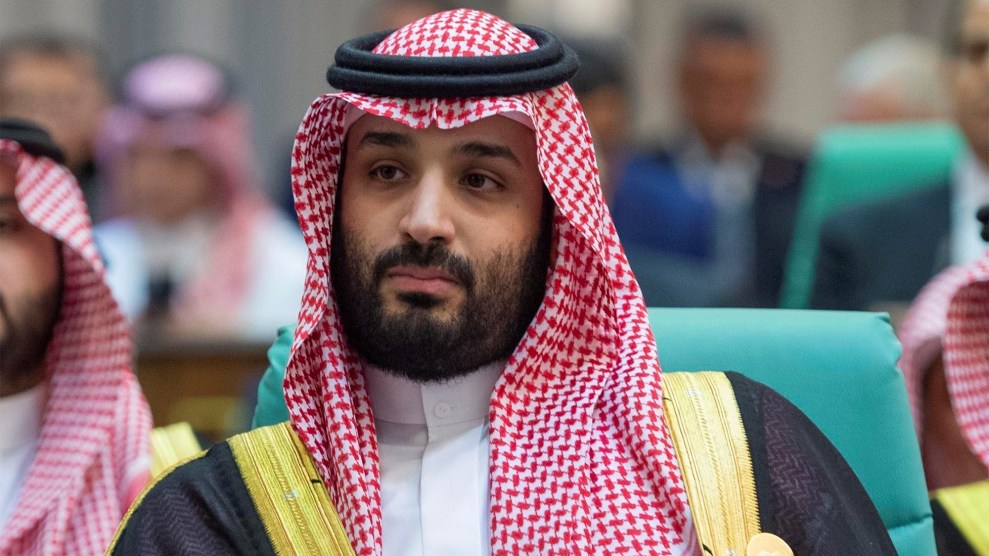 A powerhouse DC lobbying firm has formally cut ties with the Saudi government office implicated in the 2018 murder of journalist Jamal Khashoggi. The move comes after an advocacy group Khashoggi founded launched a campaign to shame the firm and one of its top lobbyists.

Squire Patton Boggs on September 17 terminated its representation of “the Center for Studies and Media Affairs at the Saudi Royal Court.” That office, despite its mild name, acted as a hub for cyber hacking and more sinister efforts spearheaded by de facto Saudi ruler Mohammed bin Salman, or MBS, to silence critics. A February report by the White House Office of Director of National Intelligence said that a Saudi team dispatched to Istanbul on October 2, 2018, under orders to kill or kidnap Khashoggi, “included officials who worked for, or were associated with, the Saudi Center for Studies and Media Affairs.”

The report also named the man who then headed the office, Saud al-Qahtani, a top aide to MBS, as among the group that “participated in, ordered, or were otherwise complicit in or responsible for the death of Jamal Khashoggi.” (The report added that it is unclear whether Qahtani and the others named “knew in advance that the operation would result in Khashoggi’s death.”) Saudi Arabia in February called the report “negative, false and unacceptable.” Qahtani was removed from his post amid international outrage over the murder.

In foreign lobbying filings from 2016, Squire Patton Boggs said that its lobbyists dealt directly with Qahtani. The firm’s last reported lobbying contacts with Congress or executive branch officials on behalf of the Saudis came in 2017, before Khashoggi’s murder. In March, a Squire Patton Boggs spokesperson told Mother Jones that the firm’s “FARA account has been inactive since 2016 and we have not been paid any money for lobbying activities.” But while its lobbying activities may have ceased, Squire Patton Boggs continued billing the Saudi office for legal work. The firm reported receiving $157,300 in fees from the Saudis in the six months ending January 29 of this year. It has reported no new payments since then. In all, the firm reported receiving at least $2.7 million from the center since signing a contract in 2016.

Squire Patton Boggs did not explain why it ended its contract with the Saudi center. But the move comes on the eve of the third anniversary of Khashoggi’s murder and after Democracy for the Arab World Now, an advocacy group Khashoggi founded, launched a campaign to convince lawmakers to pledge not to meet with Ed Newberry—a global managing partner at the firm, whose online biography quotes a description of him as the “King of K Street”—unless the firm ended its relationship with the center. Newberry was the top lobbyist on the account.

“We would never meet with such an appalling individual and are proud to continue to push for justice for Jamal Khashoggi and all victims of oppressive tyrants,” Rep. Rashida Tlaib (D-Mich.) said in a statement to Mother Jones last week. “To lobby for oppressors is to be an oppressor, and Mr. Newberry, and Squire Patton Boggs at large, would be wise to remember that.”

This is very troubling. My office will not be meeting with him. https://t.co/SSL5rE0OsW

“I will not be meeting with any lobbyist representing the Saudi Center for Studies and Media Affairs, given that it is an institution noted in the ODNI report as being implicated in Khashoggi’s murder,” Khanna said in a statement.

Freedom Forward, an organization that worked with DAWN, also circulated a petition, signed by more than 6,300 people, calling for the firm and Newberry to stop working for the center. Last week, along with 14 other organizations, DAWN sent a letter asking the firm’s chairman to drop the account and condemn Saudi Arabia for Khashoggi’s murder and for “the torture of women’s rights activists.”

Raed Jarrar, DAWN’s director of advocacy, said the firm’s decision to end the contract “was 100 percent connected to our campaign.” Jarrar said that DAWN plans to step up an effort to call out lobbyists for other Middle Eastern governments. In addition to Saudi Arabia, the group will target lobbyists for the United Arab Emirates, Egypt, and Israel, he said.

“We are celebrating this important victory and will move on to exposing other lobbyists for other abusive regimes very soon,” Jarrar said. “I hope other lobbyists in DC are worried.”

Newberry and a Squire Patton Boggs spokesperson did not respond to requests for comment.

The lobbying work the firm did in the years before the murder helped bolster MBS’s image in the United States as he began consolidating power at home. The advocacy also came as Qahtani, through the center, launched an extensive cyber operations operation, including “a network or surveillance and social media manipulation,” as David Ignatius wrote in the Washington Post in 2018. Ignatius reported that Qahtani, as MBS’ information warfare chief, felt it was his responsibility to silence Khashoggi’s criticism of the Saudi regime, even though the journalist, a Saudi citizen, was living in the United States at the time. This reportedly led to the plot to lure Khashoggi to the Saudi embassy in Istanbul, where he was murdered by a Saudi hit team.

There is no indication that Squire Patton Boggs knew the extent of the center’s activities prior to Khashoggi’s murder. But it took three years and a pressure campaign for the firm to sever the relationship.