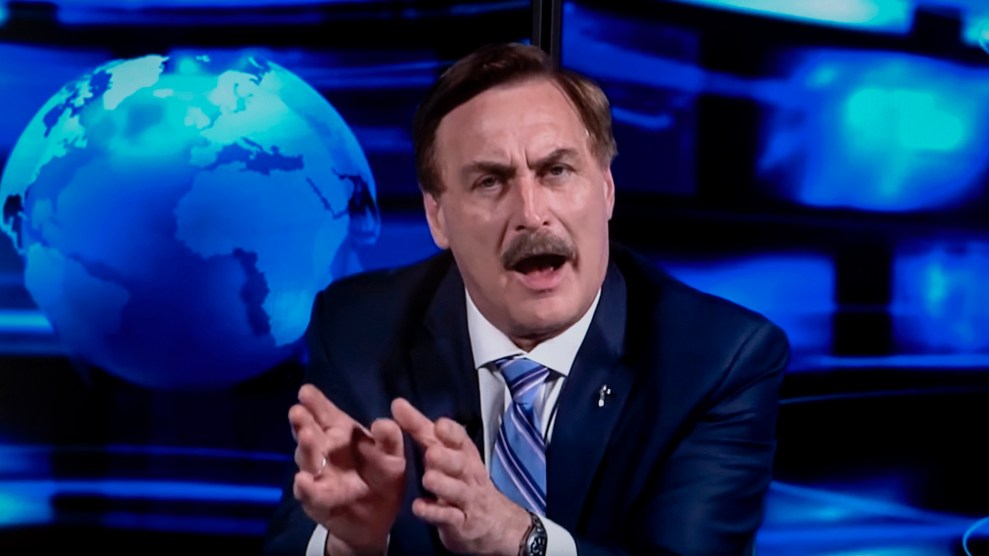 MyPillow CEO Mike Lindell’s mission to prove that the 2020 election was stolen from former President Donald Trump as part of a broad international conspiracy went into high gear Tuesday, when he held a “Cyber Symposium” in South Dakota. Lindell—who was sued for defamation by voting equipment manufacturer Dominion for $1.6 billion, and has counter-sued for the same amount—offered $5 million to anyone who could come to his event and prove that his alleged “cyber data” proving Chinese hacking of election equipment is invalid.

Computer security experts have so far been underwhelmed by the event, which has been dominated by Lindell’s reading stories about himself on stage and ranting about the media. But late Tuesday, the event took a turn when Tina Peters, the top election official in Mesa County, Colorado, took the stage and claimed that her office had been “invade[d]” and “raided” by investigators with Colorado Secretary of State Jena Griswold’s office as part of an investigation into a breach in election security. The investigation was launched after materials from her office made their way to Ron Watkins, who has achieved fame among Trump supporters for his alleged role in the QAnon conspiracy and his claims that the 2020 election was rigged.

On Wednesday, computer files apparently associated with the Mesa County election system were presented and analyzed live on a giant screen behind the stage by Watkins, who beamed into the event via livestream. In a confusing back and forth, Watkins told the crowd that his lawyer instructed him to say that the files were from hard drives taken “without authorization” from Peters’ office, and the hard drives should be returned to the clerk, and “we should stop this data review.” Peters then came on stage and said the the hard drives did not come from her office, “unless it happened during the raid.” Watkins then spoke again, saying that the drives made their way to him via Sheronna Bishop, a right-wing activist from Colorado who was reportedly one of Rep. Lauren Boebert’s campaign managers in 2020.

Griswold’s office on Wednesday could not immediately answer questions about the files presented at the symposium.

If the files are, in fact, from copies of the election management system’s hard drive, that would be a huge security breach, says Alex Halderman, a computer scientist at the University of Michigan and one of the country’s foremost experts on election equipment security.

“It would be much easier to launch an attack against [election management systems] if the attacker had a copy,” Halderman says. “That would let them develop and test an attack method tailored to the specific software and system configuration, which could then be launched with only temporary access by a non-technical accomplice.”

Griswold, a Democrat, issued a statement Tuesday saying she’d ordered Peters, a vocal Trump supporter with a history of promoting the idea that the election was a “fraud,” to “comply with inspection of election equipment, video footage, and other documents in the county” to prove that “chain of custody remains in tact and that there has been no unauthorized access to voting equipment in the county.”

A day earlier, Griswold’s office issued a statement saying that the situation “constitutes a serious breach of voting system security protocols, as well as a violation” of state election laws.

On May 25, local and state election officials held a routine meeting with Dominion representatives; portions of that meeting were apparently captured surreptitiously in a video that included passwords related to the voting equipment, and the video appears to have been shared with Watkins. A week later, Gateway Pundit, a conservative news outlet, reported on the video, claiming that a whistleblower had given Watkins information proving that Dominion voting machines connect to the internet and that Dominion employees could remotely access election systems—purported evidence of the grand conspiracy promoted by Trump and some of his supporters.

On Thursday, Griswold announced at a press conference that Mesa County allowed an unauthorized person, identified as Gerald Wood, to attend the May 25 meeting, in violation of Colorado election rules, and lied to the secretary of state’s office about Wood’s eligibility to be there. (People attending such meetings are required to undergo background checks.)

Griswold further alleged that Peters’ office compromised the security of county equipment by directing county staff to turn off required video surveillance of the equipment prior to the May 25 meeting, and that the cameras were not turned back on until some point in August. Additionally, after the machines were opened for inspection during the May 25 meeting, seals on the machines were not replaced for one to two days. The result is that 41 pieces of voting equipment can no longer be used and will have to be replaced at the county’s expense.

“We are seeing a coordinated effort to undermine confidence in elections in the path to suppress the vote nationwide,” Griswold said. She called the episode “a shame” and added that it’s “horrible for the state of Colorado to have an elected elections official knowingly allow a breach of security and also spread disinformation.”

“In an attempt to demonstrate that Donald Trump was still the rightful president, a county clerk tweeted that the election machines she was in charge of overseeing were in fact vulnerable, and in order to prove it someone in her office allegedly carried out the very breach she was falsely claiming must have been committed by anti-Trump forces,” the Bulwark‘s Tim Miller wrote of the episode earlier this week.

Griswold referred questions about potential criminal prosecution to a local district attorney, who is investigating the matter, according to the Grand Junction Daily Sentinel. Additionally, the county might be forced to refund nearly $170,000 in COVID-19 relief funds provided to the county as part of the 2020 CARES Act.

This story has been updated to include information from Griswold’s press conference.