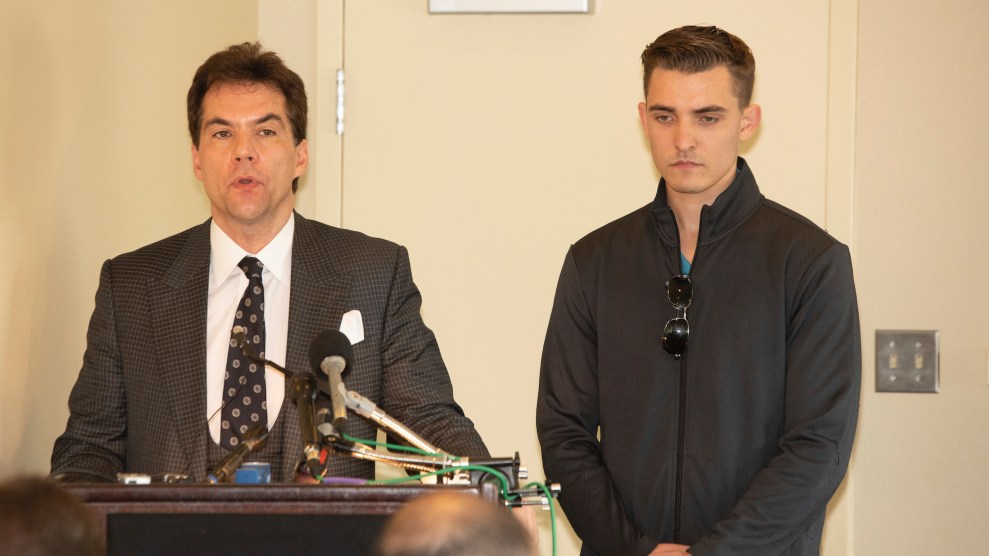 In 2017, a source told me that my profile subject, Jack Burkman, was a modern-day “Flim Flam Man” whose record “raised more red flags than a Chinese military parade.” Since then, Burkman has become a notorious right-wing conspiracy theorist, and now the Federal Communications Commission is raising yet another flag: a proposed $5.1 million fine against Burkman and his 23-year-old sidekick Jacob Wohl for overseeing unauthorized robocalls in the lead-up to November’s presidential election.

Recipients of the robocalls were told that voting would cause their personal information to become part of a “public database that will be used by police departments to track down old warrants and be used by credit card companies to collect outstanding debts.” Burkman and Wohl are also facing felony charges in Michigan related to the robocalls.

Burkman and Wohl will be able to respond to the FCC’s proposed fine before it is made final. In an interview with the Washington Post, Wohl declined to say whether he and Burkman were behind the robocalls. Unfortunately for their defense, the FCC says both Burkman and Wohl were named in the calls, which came from Burkman’s phone number. When I caught up with Burkman on Wednesday, he said, without evidence, that the FCC was coming after him to distract from the Biden administration’s handling of the Afghanistan withdrawal.

Some of Burkman and Wohl’s other stunts include plotting to smear then-Special Counsel Robert Mueller and Dr. Anthony Fauci. Burkman also tricked the Post into covering an alleged FBI raid of his home. Burkman had, in fact, staged the raid. As I reported in 2017, Burkman has been able to fund his antics through a dubious lobbying practice:

Burkman’s lobbying record includes its own theatrics. When the Hill reported that his firm signed up 70 clients, Burkman admitted that his desire to be “squeaky clean” may have led him to register more clients than he needed to. Two clients I spoke with said they paid Burkman less than the amount he reported to the government, and a similar discrepancy involving a third client appears in a court document. (Burkman says he doesn’t personally prepare the reports but tells everyone he works with to be “100 percent accurate.”)

Few of his clients have worked with a Washington lobbyist before. Desert Lakes University, which like many of Burkman’s clients lacks a working phone number, boasts on its Facebook page that it provides “education for individuals to prepare them for the future without charging the for tuition [sic].” Desert Lakes’ website went offline several years ago. Burkman calls the school a startup. Another client, the Black Moon Corporation, hopes to build a repository of genetic material akin to the library of Alexandria inside a crater on the moon.

Ralph Palmieri, Burkman’s part-time lobbying partner, says their typical clients are middle-aged and older businessmen who are not afraid to take a chance with their money. “They’ve made some good decisions over the course of time,” he says. “And they’ve made some terrible ones.”

Burkman mostly focuses on getting his clients federal grants and contracts. They rarely do, according to government spending records. Palmieri says going for government money, like other investments, involves risk. He compares it to gambling in Vegas. The odds aren’t great, but the payoff can be.

Burkman continues to report to the United States Senate that he’s signing up new clients. Earlier this month, Burkman indicated in a Senate disclosure that he and Wohl are now lobbying for Roseville Sportworld Inc., which appears to be a California ice skating rink. Why an ice skating rink would need lobbyists in Washington, let alone two who are facing felony charges, is unclear. Burkman told me Wednesday that he didn’t want to discuss his lobbying work. He added, “I don’t do a whole lot in Washington anymore.”

Burkman said his next big move might be a run for president in 2024. When I asked if Wohl would be his running rate, he reminded me that Wohl’s age makes him ineligible to hold the office. Instead, he said Wohl would be his campaign manager and chief of staff.