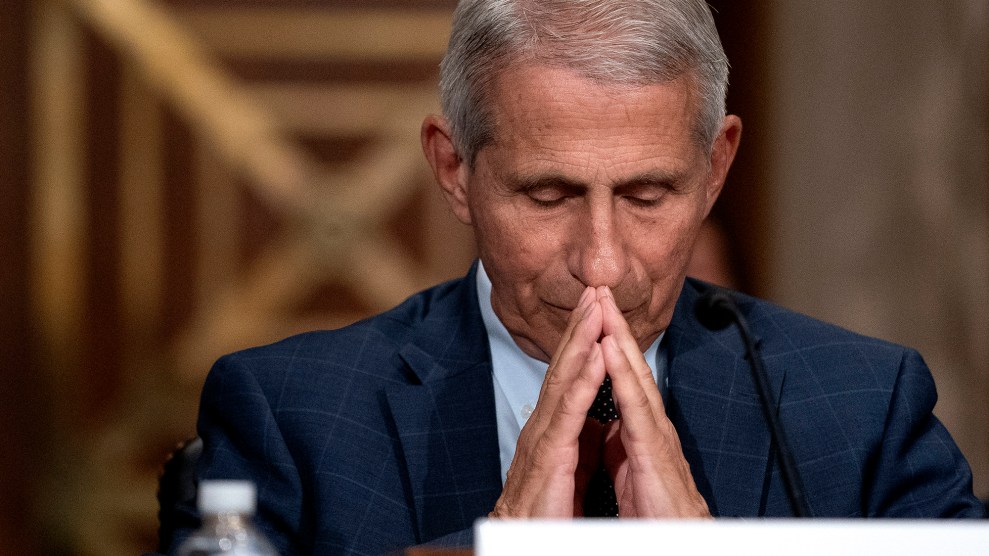 Dr. Anthony Fauci, director of the National Institute of Allergy and Infectious Diseases, during a Senate hearing on July 20Stefani Reynolds/Zuma

COVID-19 never went away in the United States, but for a while this summer, the widespread availability of vaccines allowed life in most of the country to return to something pretty close to normal. But vaccination rates have flatlined, with large numbers of eligible Americans still yet to receive a shot, and infections and hospitalizations are starting to surge again from their early-summer lows. The seven-day average of new cases across the country has increased 300 percent over the last month as the more contagious “Delta variant” continues to spread, and hospitals in some states are once again starting to be overwhelmed.

On Sunday, Dr. Anthony Fauci, the president’s top adviser on the pandemic, confirmed that the nation was beginning to backslide. “It’s not going to be good—we’re going in the wrong direction,” he said on CNN’s State of the Union.

Dr. Anthony Fauci says US is "going in the wrong direction" as the number of Covid-19 cases continues to rise, particularly among unvaccinated Americans. https://t.co/BtMUrX2WfD #CNNSOTU pic.twitter.com/QxPOQ3d2J3

Fauci reiterated that Americans who have received the vaccine are largely protected from the coronavirus and its Delta variant—and particularly against potential hospitalization or death from COVID-19. Increasingly, hospitals are filling with younger Americans who had chosen not to receive a vaccine.

This is not what anyone wants to hear right now, but the numbers don’t lie. The reasons for the lagging vaccination rates are varied, but one significant and entirely unnecessary one has been the deliberate effort by Republican elected officials and commentators to undercut vaccination efforts. There’s a considerable range in how this manifests itself, from outright vaccine conspiracy mongering, to a conspicuous refusal among Republican leaders to publicize their own vaccination status, to a faux-populist emphasis on staving off government mandates.

None of that needed to happen, and it may mean a whole lot of unnecessary illness. In recent days—as things have taken a more worrisome turn with the current surge—there has been a strikingly abrupt shift in messaging among some in the GOP. But the previous messaging is likely a hard thing to undo. On Saturday, ex-President Donald Trump typified the dissonance of this effort, telling supporters in Arizona—where he had traveled to further his lies about the 2020 election—“I recommend that you take it, but I also believe in your freedoms 100 percent.”

Vaccine hesitancy was totally understandable, Trump suggested, trying to pin it on Joe Biden. “Because they don’t trust the President, people aren’t doing it.”