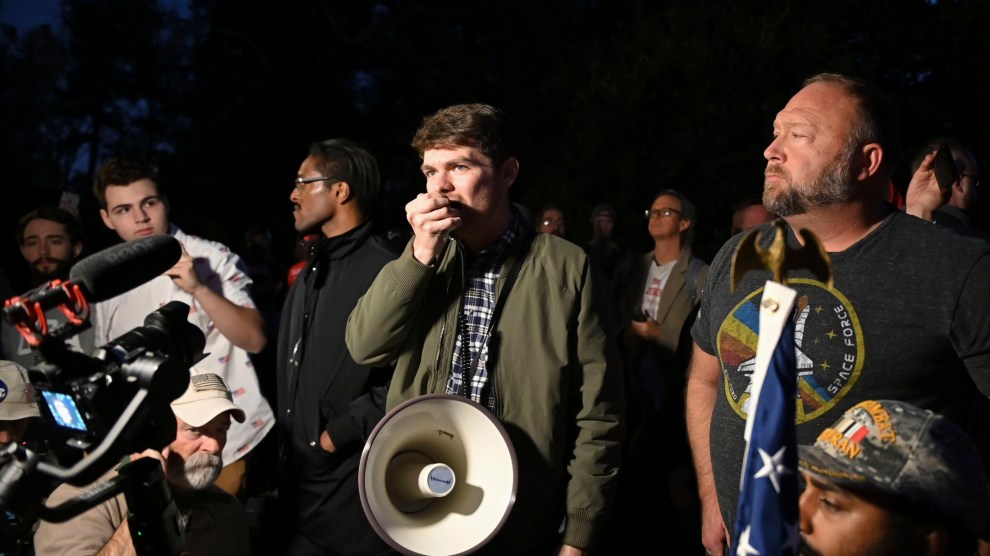 Nick Fuentes stands between Alex Jones and Ali Alexander during a November 2020 "Stop the Steal" rally at the Governor's Mansion in Georgia.(Photo by Zach Roberts/NurPhoto via AP)

Nick Fuentes, a 22-year-old far-right influencer, is pretty open about being a white supremacist, an antisemite, a racist, a fascist, etc. Sitting U.S. Rep. Paul Gosar (R-Ariz.) evidently has no problem with any of that. A flyer made the rounds on Monday inviting people to “Please join Nick Fuentes and America First for a Fundraiser Event with Congressman Paul Gosar,” with details about date, time, and location to come on Thursday.

Whether this event is actually happening now seems unclear. Gosar seemed to defend (and thus confirm) his participation in the fundraiser in a tweet on Monday, characterizing it as a normal bit of big-tent politics:

Not sure why anyone is freaking out. I’ll say this: there are millions of Gen Z, Y and X conservatives. They believe in America First. They will not agree 100% on every issue. No group does. We will not let the left dictate our strategy, alliances and efforts. Ignore the left https://t.co/EJAZopO2pI

But on Tuesday he told a CNN reporter he wasn’t sure “what’s going on.” He added cryptically, “There’s no fundraiser that I know of on Friday,” though no one had suggested there would be a fundraiser on Friday.

We do know that Gosar has palled around with Fuentes before. He attended AFPAC, the influencer’s more extreme version of the Conservative Political Action Committee conference, as the Arizona Republic points out. Gosar also has a problematic rap sheet of his own, consisting of conspiracy theories alleging that the January 6 Capitol siege and the Unite the Right white power rally in Charlottesville were both left-wing false-flag operations. He was communicating with far-right “Stop the Steal” organizer Ali Alexander in the lead-up to the insurrection.

1. Nick Fuentes thinks being a colonizer is cool and that white people have the best racial slurs.

As if we’re ever going to hold an L for being white…Colonizer is my favorite. We did colonize the Earth. What’s the own? “You colonized the earth. You enslaved my people.” Ah, you got me, damn. We suck for that. That’s not epic and demonstrative of how smart and powerful we are. How retarded.

I’ve got a racial slur for you. I don’t even have to say it. It would annihilate you. Blacks are eternally coping for the n-word. We can drop that anybody and they would stand no chance. Good luck coming back from that. We have all the best ones. White people wield the best racial slurs.

[Reading a viewer question] “If I take one hour to cook a batch of cookies and Cookie Monster has 15 ovens working 24 hours a day, every day for five years, how long does it take Cookie Monster to make 6 million batches of cookies.”

That’s a good question. That doesn’t sound correct me…The math doesn’t seem to add up there.

3. Sometimes Nick Fuentes has to cut himself off during his clips to make sure he doesn’t say the n-word on camera.

They probably called into the lobby, these fucking—I almost just said the n-word right there. Whatever, faggot leftists, nice try. These Blacks at the counter, they’re fucking up my opsec.

4. Brazilian President Jair Bolsonaro has control of the military, which is good because that means he can overrule Brazil’s Congress and “do whatever [he] wants.” Nick Fuentes wants Trump to have that power in America.

Bolsonaro. We need something like that in America. Hopefully, he can show Trump how it’s done. What’s cool about him is that he has control of the military…You’ve got 55 percent of the vote and the military. You can do whatever you want. Screw the Congress…Maybe Trump can learn from that a little.

5. One day “we’re going to separate everybody” to stop the dirty “mixing” and “restore the integrity of our nationals.

It’s a tough world but we’re going to get it all straightened out. we’re going to separate everybody…There’s a lot of mixing going on, but we’ll restore the integrity of our nations one day.

6. When white people are no longer the majority in America, the country will get worse. Nick Fuentes realizes that this is maybe a white nationalist or white supremacist belief, but, to him, that’s okay.

7. Marriages between different races are upsetting to Nick Fuentes.