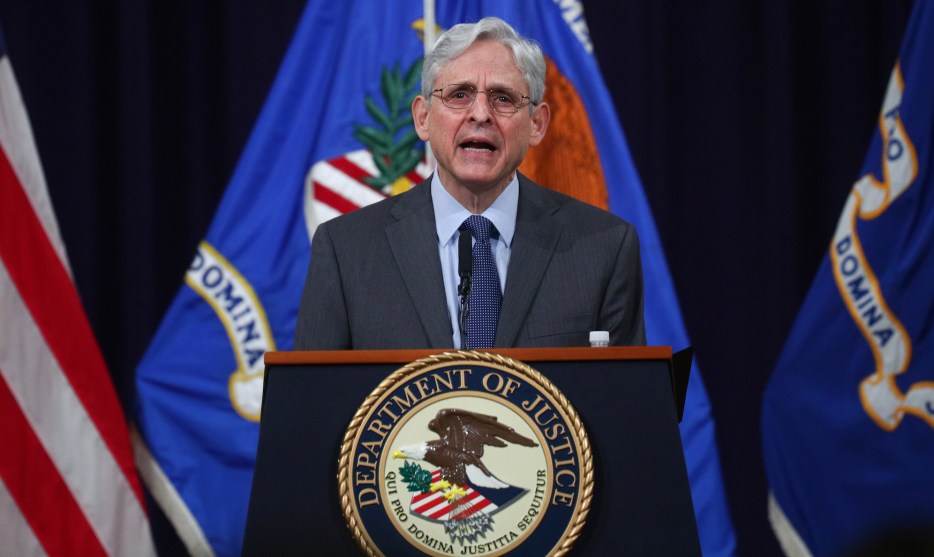 In its first major action to combat GOP voter suppression laws, the Biden Justice Department announced on Friday that it is suing the state of Georgia over its new voting restrictions. The lawsuit was first reported by Mother Jones.

“Today the Department of Justice is suing the state of Georgia,” Attorney General Merrick Garland announced at a press conference at the Justice Department headquarters.

The lawsuit challenges a number of provisions of the law, including a ban on election officials sending unsolicited mail ballot request forms to voters, a shorter period of time for voters to request absentee ballots, new voter ID requirements for mail ballots, restrictions on the number of mail ballot drop boxes, a ban on giving out food and water to voters in line, and throwing out provisional ballots cast in the wrong precinct.
Gov. Brian Kemp has said “there is nothing Jim Crow” about the Georgia law, enacted in March, but it includes 16 different provisions that make it harder to vote and that target metro Atlanta counties with large Black populations.The lawsuit is being overseen by Kristen Clarke, the head of the Justice Department’s Civil Rights Division, and Vanita Gupta, the associate attorney general—two longtime civil rights lawyers with extensive records litigating against new restrictions on voting.

The Georgia law, known as SB202, appears to have been part of a coordinated national effort by conservative activists to make it harder to vote in states across the country. The dark money group Heritage Action for America bragged in a leaked video to donors in April, first reported by Mother Jones, that the Georgia law had “eight key provisions that Heritage recommended,” including several targeted by the Justice Department lawsuit.

In a speech earlier this month, Garland said he would double the number of lawyers in the department’s voting section to scrutinize new laws making it harder to vote. Still, litigation against new voter suppression laws faces an uphill battle against a conservative-dominated judiciary.

The Supreme Court’s 2013 gutting of the Voting Rights Act means that states with a long history of discrimination—including Georgia—no longer need to get their voting changes approved by the federal government. Since that decision, 26 states have enacted new restrictions on voting, according to an analysis by Mother Jones published on Friday. Garland said Friday that if not for that Supreme Court ruling, “it is likely that SB202 would have never taken effect.”

After Republicans filibustered a debate on S.1, known as the For the People Act—the Democrats’ sweeping democracy reform bill—on Tuesday, President Biden said he plans to speak out more aggressively about the need for federal action on voting rights. Democrats have proposed a second voting rights measure known as the John Lewis Voting Rights Advancement Act, and they’re also drafting a new bill based on Sen. Joe Manchin’s S.1 compromise proposal, which they hope can attract Republican support or will lead to an internal conversation among Democrats about changing the 60-vote requirement to pass voting rights bills.

“We need Congress to pass S.1 and the John Lewis Voting Rights Act, which would provide the department with the tools it needs,” Garland said on June 11. But even absent those measures, Garland’s department is taking action to challenge restrictions on the right to vote.

This story has been updated to include comments from Garland’s announcement.