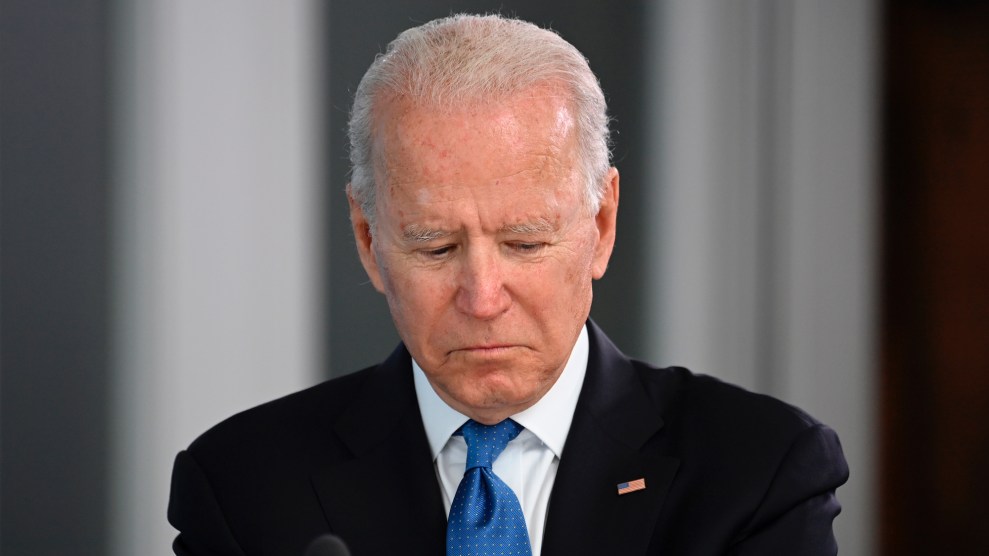 A team of White House economics advisers had, ostensibly, convened a brain trust of left-leaning think tanks and policy experts on Monday evening to discuss how they might help President Joe Biden build a case for his economic agenda, a pair of proposals hitting the skids in negotiations with both Republican senators and their moderate Democratic colleagues. But the wonks wouldn’t get down to business until Biden’s aides addressed one matter: Why had Biden and the White House appeared to have abandoned support for the supplemental unemployment benefits buoying workers through the fragile economic recovery?

Representatives from multiple organizations—including the Economic Policy Institute, the National Women’s Law Center, and the Hamilton Project—raised the issue when it was their turn to speak, according to sources familiar with the meeting. Attendees didn’t belabor the subject, but the message was clear: The administration’s recent messaging on the subject is a real problem.

The White House aides in the meeting included Heather Boushey, a member of Biden’s Council of Economic Advisers, as well as Bharat Ramamurti and David Kamin, both deputy directors of the National Economic Council. As aides listened, they didn’t resist the feedback—“poker-faced,” in the words of one attendee—but kept the meeting moving along to its intended subject.

For weeks Democrats and their allies had been at war with Republican governors in more than two dozen states over their refusal to continue the $300 per week extra unemployment provided in the COVID relief package Congress passed in March. Last week’s jobs report showed steady growth, but still fell short of expectations—particularly among workers who stopped seeking employment during the pandemic. The GOP has argued that the extra cash discouraged unemployed workers from applying for jobs and contributed to a labor shortage that is, so far, just conjecture based on anecdotes rather than any clear evidence. Democrats fought back, blaming low wages, the lack of available child care, and the continued risk of catching COVID as reasons why some workers still choose to stay home.

But while most Democrats held a firm line on the need for helping the unemployed, the White House seemed to nod to the GOP’s position last week. Delivering remarks on the May jobs report last Friday, Biden said it “makes sense” for the $300 per week benefit to expire in the first week of September. Brian Deese, the director of the White House’s National Economic Council, told reporters that afternoon ending the benefits on their current timeline is “appropriate.” In response to a question about whether the enhanced benefits were dampening workers’ interest in finding jobs, White House Press Secretary Jen Psaki called the dynamic “a really difficult thing to analyze,” adding that GOP governors “have every right” to discontinue the benefits.

A White House official told Mother Jones that the administration’s position has been consistent with regard to the benefits, which had been designed as temporary, emergency measures and should, in the White House’s view, be tied to economic and public health conditions, not a deadline. When the first of the GOP-led states announced their rejection of the enhanced UI in mid-May, Psaki told reporters that to do so was “up to the states,” adding that the benefit was “as the root cause driver of people not seeking work.” On Thursday, when new unemployment insurance claim data pointed to a 50 percent drop in new claims since January, Deese pointed to the progress as proof that the pandemic-ravaged economy has his a turning point.

But the renewed attention on the program’s wind-down—and the White House’s hesitancy to resist Republican governors cutting the program early—has raised concerns for left-leaning economists and labor experts, who view it not only as contradicting the facts of the country’s economic situation but with the potential to undermine the progressive economic agenda Biden has outlined for his FDR-like legacy. “If you aren’t going to defend a policy that was a correct policy in the face of lies, then where are you going to draw the line?” says Bill Spriggs, the chief economist of the AFL-CIO.

Biden premised his campaign not just on returning the economy to its pre-pandemic normal, but on correcting the imbalances that favored employers over workers that existed long before COVID. His campaign platform included raising the federal minimum wage to $15 per hour and holding executives personally liable for tampering with employees’ unionization efforts. Biden’s COVID relief package, the American Rescue Plan, made a down payment on those aims—particularly for the unemployed, by continuing the enhanced unemployment benefit that had begun under the first COVID relief package Congress passed in the spring of 2020. The ambitious pair of economic proposals that followed, the American Jobs and Families Plan, aim not just to create millions of jobs over the next decade, but to also make ones that are better and give workers more power.

The administration’s shift on unemployment benefits kicked off a flurry of enraged emails over a listserv for liberal labor advocates, who described the White House’s words to one another as a gut punch. The notion that Republican governors could act at their own discretion raised particular concerns. “We were all very incensed that would be the position,” Spriggs, who was not at the White House meeting, tells me.

“If you aren’t going to defend a policy that was a correct policy in the face of lies, then where are you going to draw the line?”

Sen. Bernie Sanders (I-Vt.) and other labor experts have insisted that the Biden administration is legally obligated to pay out the benefits to jobless workers even if the states refuse; the Department of Labor maintains they have little to no recourse. But the string of comments from Biden and White House officials appeared to concede the unemployment supplement wasn’t delivering the promised benefits—a perspective out of alignment with many in the network of left-leaning economists and experts who have informally consulted Biden both as a candidate and president. Enhanced unemployment is bolstering the economy, those experts say; the main issue is a low demand for workers, not a low supply. The sectors that are facing shortages, such as leisure and hospitality, have filled vacancies by raising wages for otherwise low-paying jobs. The policy, in other words, is empowering workers in precisely the manner Biden had promised.

After a middling April jobs report—the first after the COVID relief package passed—Biden appeared to acknowledge the GOP attacks with an announcement that workers receiving unemployment benefits must take a job if a “suitable” one is offered to them. But even as he did, Biden defended the enhancements for the unemployed. “No, nothing measurable,” the president said last month when asked if the enhanced benefits had discouraged workers from taking jobs. Administration officials praised employers who raised wages in response to the urgent need for workers.

And indeed, as Republican governors began announcing their intentions to reject the supplemental unemployment payments last month, Democrats seized on those decisions to criticize the GOP for taking an anti-worker stance. “What the Republicans are saying, by trying to do away with this supplement on top of unemployment is, ‘We’re going to starve you back to work,’” Sanders said on MSNBC last month. At the suggestion from Republican senators to end the unemployment enhancements early and use the leftovers to pay for Biden’s proposed infrastructure package, “that is a prescription for economic sabotage,” Senate Finance Committee Chair Sen. Ron Wyden (D-Ore.) told me last month.

Caving on this point, experts note, could endanger other aspects of Biden’s proposed agenda. Spriggs highlighted that several planks in Biden’s economic plans, such as his universal pre-school and college affordability proposals, rely on the federal and state partnerships, and allowing the GOP to just override Congress sets “a dangerous precedent.” (Of course, many existing social programs, such as Medicaid, function in the same manner.) The White House’s budget, released a week before the May jobs report and the White House’s comments on unemployment, offered a “really strong, progressive roadmap” for improving the unemployment system that would avoid such ad hoc responses to future crises, says Rachel Deutsch, the supervising attorney for worker justice at the Center for Popular Democracy, a left-wing advocacy group. “My concern is that the White House, buying implicitly into these narratives about the relationships between unemployment insurance and the motivations of unemployed people is directly undermining the agenda they’ve set out in the American Families Plan.”

There’s also a matter of racial equity, something the Biden administration has stressed as a key goal of its economic agenda. Cutting off the enhanced unemployment benefits too quickly will disproportionately harm unemployed Black workers—and undermine the administration’s goals of achieving racial equity. The rate of employment among Black workers remains nearly twice as high as that of white workers, according to the May jobs report, and half of the people who will be cut off from the unemployment benefits in the red states will be workers of color. “That’s why I find it disturbing that the administration isn’t sticking up for the program,” Spriggs says. “It wants to address racial equity, and a program like this is core to that.”

Some progressive groups are fighting back against the unemployment narrative. The Groundwork Collaborative, a left-leaning think tank, and its political arm began a six-figure digital media campaign on Thursday to advocate for the continuation of the enhanced unemployment benefits until the economy is restored. “Allowing unemployment insurance to expire in a few months, when the Black unemployment rate is still unacceptably high and millions are still out of work, would unnecessarily prolong the deep economic crisis we’re facing and cause unimaginable pain to the millions around the country who rely on these payments to survive,” Rakeen Mabud, Groundwork Collaborative’s chief economist, says.

What the episode raises for some is a question of how hard the Biden administration is going to fight for the whole of its progressive economic agenda in the face of GOP pushback. “There’s a big disconnect between the general principles the White House has embraced,” Deutsch says, “and the way they are actually engaging at this moment.”