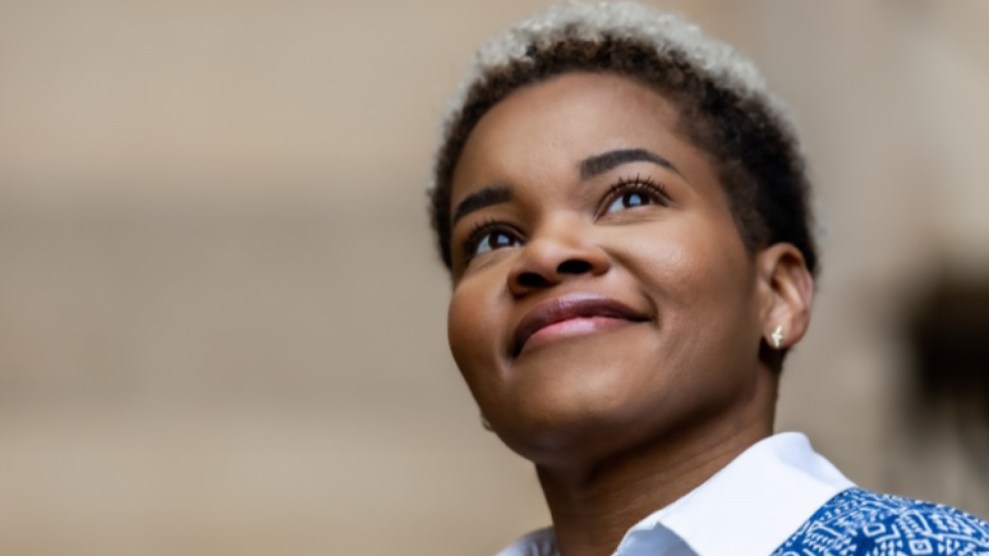 During a typical winter, the city of Buffalo, New York, sees more than 70 inches of snow. This year, as the snow piled up, India Walton went door to door, snowy day after snowy day, collecting petition signatures to appear on the ballot as a mayoral candidate. “It was very cold and a lot of people were reluctant to open their doors,” Walton said. “But we made it.” After more than 77 inches of snow and 2,000 signatures, it is summer and Walton is running for mayor. The primary election is today.

While all eyes have been on the mayoral race in New York City, the upstate city of Buffalo is poised for a potential swing. Walton, a lifelong Buffalonian, former nurse, and founding executive director of a local land trust, is a socialist. She looks to Rep. Cori Bush (D-Mo.) as a role model. She says she obsesses over the reports from organizations like the Vera Institute, a nonprofit aimed at tackling mass incarceration, and the Fair Fines + Fees Coalition, a local group of researchers seeking to end exploitative traffic enforcement.

In her first 100 days, Walton has promised to sign a tenant’s bill of rights that would install a tenant advocate and institute rent control. She wants to remove police from responding to most mental health calls. She plans to declare Buffalo a sanctuary city. She would be the first woman to be Buffalo’s mayor. While there are other radical mayors in the United States, Walton would be the only socialist mayor in a major city.

It would be a change for the Western New York community. The current four-term mayor is Byron Brown. After a lackluster police reform agenda required by the state, Brown has drawn heavy criticism. The Working Families Party, which supported Brown in previous elections, now backs Walton’s campaign, saying they were partly influenced by protests after the death of George Floyd.

Buffalo’s mayoral race is one of several in New York state where the incumbents face challenges from more left-leaning candidates. There is Rev. Valerie Faust in Albany, an activist who has criticized the treatment of protesters last summer, and Malik Evans in Rochester, who introduced a police accountability board as a City Council member. “I think what you’re seeing in upstate is pretty similar to what the discussion is at the national level in the Democratic Party,” Shana Kushner Gadarian, a political science professor at Syracuse University, told City & State, “which is the progressive wing being more prominent than what you’ve seen in the past, and progressive Democrats running quite clearly on being progressive.”

For Walton this means “pushing the boundaries of what progressive politics means in Buffalo” so that “we can build an infrastructure of our own that can take on the status quo.”

Still, Walton faces the hurdle of beating an incumbent with name recognition and donations from City Hall employees. Last-minute donations to Brown, including from billionaires in the Jacobs family, who run the food service and hospitality company Delaware North, may hurt her chances.

Walton welcomes the challenge. “There are lots of periods in my life where I saw a problem, and in my quest to be helpful, it sort of took me on a different trajectory, and running for mayor is no different,” she said. “I see a lack of leadership. I believe I can do better.”

Walton says her life and work experiences have shaped her political ambitions. At 19, she gave birth to twin sons who were born prematurely and required care at the NICU. Although the care was good, the staff used jargony language. It was hard to make informed decisions about her children’s care. So Walton went back to school. She became a nurse and then went back and worked in the same NICU that cared for her sons. “Being able to deliver babies and save lives and have that type of impact on families was so meaningful,” Walton said. The experience also caused her to reflect on how women of color are treated in hospitals across the country.

“It’s not only health care, it’s finances, housing—every system in this country was designed to exclude poor people and people of color,” Walton said. “And until we start having serious conversations about how we undo that, and until we begin to pursue policies that actively undoes the harm that’s been caused, we’re not going to get very far as a country.”

Her activist background and working-class solidarity have won her support in the city of 255,000 with a nearly 30 percent poverty rate. She’s backed by organizations including the Democratic Socialists of America and a local teachers federation, and she was recently praised by the Challenger, a weekly Buffalo newspaper for the Black community. So devoted are her campaign volunteers that they have made a vow to tattoo a local barbecue marinade logo on themselves to fundraise.

Incumbent Brown has refused to debate Walton, so she has had to work hard to put herself in front of voters. She drew cheers while asking people to vote for her during Buffalo’s Porchfest, a community music festival modeled after an event in Ithaca, and visited voters in the tight community on the East Side, where she grew up.

Reflecting on how that community has fared in her lifetime, she noted the lack of grocery stores, post offices, and banks. She pointed to a proposed $30 million project that would revitalize the town’s waterfront district “when the majority of working-class Buffalonians are struggling just to get the basic necessities.”

When I talked to Walton on the fifth day of early voting, she expressed confidence about her chances of winning, thanks to the support of the city’s working class. “I think that we’re coming to a point of reckoning,” she said.