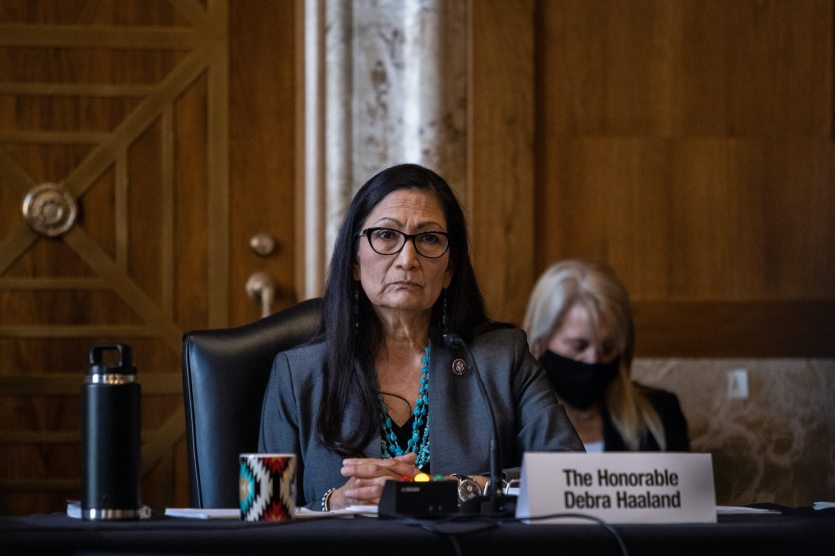 United States Representative Deb Haaland looks on during a Senate Committee on Energy and Natural Resources hearing on her nomination to be Interior Secretary. February 23, 2021.Graeme Jennings/CNP/ZUMA

Less than a month into her term leading the Department of Interior, Deb Haaland, the first Native American Cabinet secretary, announced a new effort to address an issue that has some personal resonance: the lengthy roster of unsolved cases involving missing and murdered Indigenous women.

Murder is the sixth leading cause of death for Alaska Native and American Indian women under the age of 45.  For AI/AN women younger than 19 years old, murder climbs to the fourth leading cause of death. But it’s not just murder; the rate of violent crime perpetrated against Native women is alarmingly high, and flaws in the criminal justice system have meant little is done to solve the cases or hold perpetrators accountable.

“Violence against Indigenous peoples is a crisis that has been underfunded for decades,” Haaland said in April, when she introduced a new Missing and Murdered Unit (MMU) to prioritize these cases within the Department of the Interior. “Far too often, murders and missing persons cases in Indian country go unsolved and unaddressed, leaving families and communities devastated.”

The longstanding violence has been largely invisible to people outside Native communities, and progress to address this issue, much less inform agencies and the public of its seriousness, has been slow. Even under the best of circumstances, the criminal justice system often fails to protect women generally, but when it comes to crimes against Native women, the effort is even further behind.

One key issue has been the morass of complicated jurisdictional concerns that has meant many instances of MMIW aren’t investigated, tracked, or prosecuted. As we reported in 2018:

Under federal law, tribes only have sole jurisdiction in crimes in which both perpetrator and victim are Native American, and even then, the most serious crimes—including many domestic violence offenses—are automatically sent to the federal government, regardless of who is involved. The policy has long created something of a legal quagmire on tribal lands, giving them a reputation as a safe haven for many criminals. Complicating matters is that historically, the federal government has declined to prosecute many tribal cases—a problem that still continues today.

The result is that in many cases, there has been no justice for most Indigenous survivors, families and communities with missing or murdered loved ones. In the last few decades, legislation has begun cleaving a path toward protecting Indigenous women from rampant violence. In 2005, a “Safety for Indian Women” provision was added to the Violence Against Women Act, and the Tribal Law and Order Act in 2010 increased the punitive authority of tribal governments in criminal cases.

Still, those efforts left many problems unresolved. Right now, the efforts to address MMIW centers on establishing basic protocols—like mandating that the cases are reported and sharing information between law enforcement agencies—that will impel law enforcement to engage in a baseline level of functioning when such a case arises.

Savanna’s Act, for instance, that was passed in 2020, requires the Department of Justice to “review, revise, and develop law enforcement and justice protocols” to address missing or murdered Native Americans. The law includes a requirement for the DOJ to “provide training to law enforcement agencies on how to record tribal enrollment for victims in federal databases,” a necessary requirement because for decades law enforcement agencies consistently failed to record a victim’s tribal affiliation in indigenous criminal cases. That gap meant a vast number of cases involving AI/AN victims weren’t tracked, and the extent of the violence against Indigenous women was underreported and undercounted.

Haaland’s newly invigorated Missing and Murdered Unit will boost funding for the operation from $1 to $6 million, bolstering the efforts of Operation Lady Justice, a task force created under President Trump in 2019 that brought together the Department of Interior, Health and Human Services and other agencies to develop some strategies to address the outsize number of MMIW. The increased funding will add personnel and expand 7 MMU offices in Minnesota, South Dakota, Montana, Tennessee, New Mexico, Arizona and Alaska. The new offices will specifically target MMU cases and collaborate with existing law enforcement to solve them.

Haaland also announced that she would implement the “Not Invisible Act,” a 2020 bill mandating the coordination among law enforcement agencies to address disproportionate rates of violent crime against Native Americans, an effort that hasn’t been particularly effective in the past, but under Haaland’s watch could be pivotal for law enforcement in solving MMIW cases.

Haaland’s initiatives mark a new commitment to addressing what many consider to be a crisis for Native women. In 2016 alone there were 5,712 instances of missing or murdered indigenous women. According to the Coalition to Stop Violence Against Native Women, Native women are ten times more likely to be murdered and more than half experience sexual violence in some form. The National Crime Information Center notes that of the 5,712 reports in 2016, only 116 cases were logged in the US Department of Justice’s federal missing persons database. Plus, non-native perpetrators can’t be prosecuted on tribal lands, which becomes a big problem because Indigenous women are commonly attacked by non-native men. A separate study found that of those who experience sexual violence, 96% of them had a non-Native perpetrator. Nicole Matthews is the executive director of the Minnesota Indian Women’s Sexual Assault Coalition and has seen this dynamic play out in her client population in which, she says, “of the rates of violence victimization of Native women, primarily over 70% are white offenders [or] non-native offenders.”

According to the Minnesota Indian Women’s Sexual Assault Coalition, Native women are especially vulnerable because they often must navigate their lives at the intersection of several dire social issues: poverty, sexism, and structural racism. Sometimes homeless and often poor, many of these women are exploited through sex trafficking or unwanted prostitution, where they face continued abuse and risk, and often racial discrimination and violence.

In 2019, when he testified before to the House Committee on Natural Resources, Charles Addington, an enrolled member of the Cherokee Nation and [former] Deputy Bureau Director at the Office of Justice Services in the Bureau of Indian Affairs—he was recently appointed to be a Senior Adviser in the BIA—called for more robust interagency efforts: “Many tribal leaders agreed that a holistic, multi-faceted approach to building safe and secure communities is necessary to address the particular criminal issues that plague Indian Country and Alaska Native villages.”

Historically, tribal law enforcement has had to rely on outside agencies, such as local and state law enforcement, or federal agencies to help track down and prosecute offenders, which creates a complicated morass of agencies, laws, and jurisdictions, repeatedly allowing cases to slip through the cracks. In early May, Haaland met with reporters and described the new initiatives as a “whole-of-government” approach. In the past, she said, “Indian issues were relegated to tribal offices within federal agencies,” but under Biden, “Every federal agency is taking our commitment to strengthening tribal agency and self-government seriously. We’ll keep working until our people stop going missing without a trace.”

Matthews, from the Minnesota Indian Women’s Sexual Assault Coalition, remembers an Indigenous woman sex worker describing a pimp who told her, “I thought we’d killed all of you.” That chilling one-line anecdote is part of a compilation of stories for the Garden of Truth Project her organization gathered. The collection includes interviews with 105 Native women about their experiences with prostitution, sexual assault, racism, and abuse.

“When I read that, it was so shocking. It was like someone hit me,” says Matthews, who is Anishinabe from the White Earth Band of Ojibwe. “To think that’s the level of violence that people feel and think when they see us. And that’s reality.”

Nagle, and other Indigenous women advocates with whom I spoke were supportive of Haaland and hopeful about her efforts. But even though these changes are positive, they are just scratching the surface of a rampant, complicated problem. Advocates told Mother Jones that to have a truly effective program, federal agencies need to engage with tribal leaders, native families, and advocates, who in the past have not been included.

“If you’re saying, ‘Oh, we’re just gonna have the federal agencies come together, talk and figure out what solution is,’ there won’t be a solution,” said Mary Kathryn Nagle, a lawyer for the National Indigenous Women’s Resource Center. “They’ve had years, decades, generations to do that, and they haven’t. So we know that we need advocates, tribal leaders, survivors, victims families. We need the people on the ground doing the work to have a seat at the table.”

Solving the problem will also demand a commitment that extends outside Haaland, an effort that doesn’t lose momentum in four years, says Shannon O’Loughlin, a Choctaw member and Chief Executive for the Association on American Indian Affairs. “There has to be a structure that’s going to really be committed to diminishing the numbers and the occurrences,” she says. “Not just finding the missing women, not just prosecuting the perpetrators, but preventing it in the first place.”