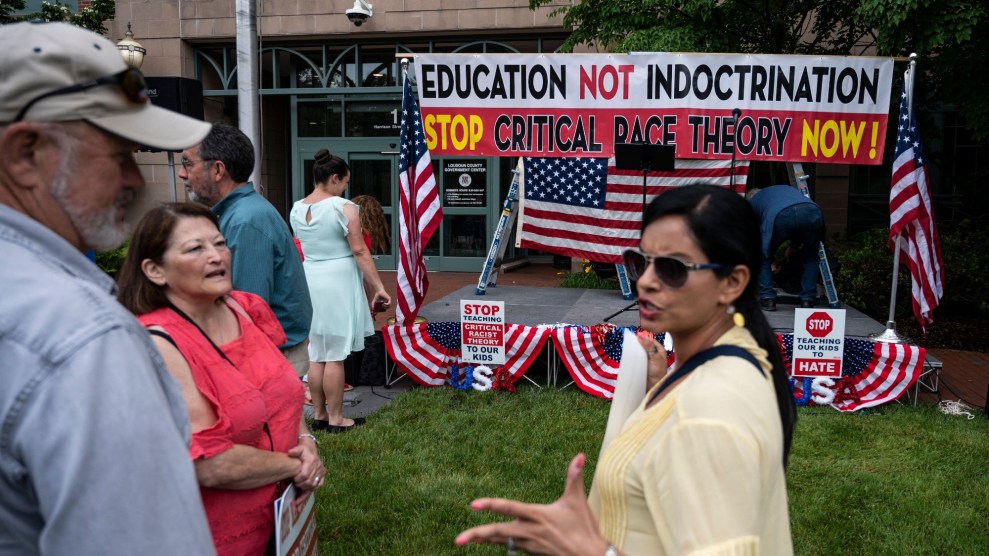 The latest “woke” boogeyman riling up conservatives is critical race theory, a scholarly framework that seeks to understand the role race and racism have played in all aspects of society. Of course, ask a Fox News host, and he’ll tell you with a straight face that CRT is a Marxist ideology that teaches white children that they’re inherently inferior—and if that’s not enough, they should feel bad about their skin color. According to extensive research by Media Matters for America, Fox News has mentioned critical race theory more than 1,300 times in the last three-and-a-half months alone.

Fox is obviously not alone in hammering the point, and the fake outrage about critical race theory is hitting a fever pitch at a crucial moment: the month when Juneteenth, a commemoration of the end of slavery, is celebrated. This celebration is a relatively new phenomenon. In the past, the day has hardly been acknowledged, but it has gained more recognition recently. And after last year’s racial justice protests, companies and schools rushed to acknowledge the day with time off, celebrations, and learning opportunities. But that acknowledgment has its limits.

After a year of demonstrations and a devastating pandemic that still continues to disproportionately kill people of color, Republicans are fighting yet another battle that doesn’t really exist. Okay, perhaps a few teachers are telling students that they’re inherently bad for being white, but the larger point is crucial: Collectively, we still struggle to fully understand America’s real history, including the persistent legacy of slavery. So how can we celebrate Juneteenth when we can’t even talk about racism?

First of all, let’s understand what this holiday commemorates. On June 19, 1865, Major General Gordon Granger went to Galveston, Texas, with other federal soldiers and walked the streets reading General Order No. 3, a document declaring the slaves were free. The following year, on the anniversary of his walk, the freedman celebrated.

It’s important to know that the announcement in Texas came two years after Abraham Lincoln’s Emancipation Proclamation of January 1, 1863, and that the official end of slavery didn’t happen until the ratification of the 13th Amendment in December 1865. Almost immediately after slavery was abolished, the former Confederate states attempted to reinstall a white supremacist regime; they waged a violent campaign throughout the South, crushed the short-lived Reconstruction era, and ushered in Jim Crow, the effects of which we’re still living with today. Juneteenth may be considered a cause for celebration, but it’s also the day that marks a new chapter of post-slavery America: the beginning of the long, difficult march toward racial equality that continues today.

There’s no small irony in the fact that in Texas this week, the state where the holiday originated, Republican Gov. Greg Abbott signed a law limiting how educators can talk about current events and America’s history of racism. In effect, the law seeks to ban critical race theory. Notably, the law prohibits schools from ever using as a teaching tool the New York Times’ 1619 Project. The prize-winning endeavor theorizes that the real founding of America took place not in 1776, but 1619, the year when the first enslaved Africans first arrived in Virginia.

Texas is not alone in its attempts to censor educators who attempt to teach about America’s racist history. As I’ve written previously, these laws have gone into effect in several states and have had real-life consequences. Consider Melissa Smith, an adjunct professor at Oklahoma City Community College who has been forbidden from teaching her Race & Ethnicity course this summer, because state lawmakers banned instruction in every educational venue on critical race theory.

Parents, naturally, have joined in the hysteria. Several outlets have reported that parents are calling their children’s schools concerned that their kids are being taught that white people are intrinsically evil. In Loudon County, Virginia, a racially diverse group of adults held a rally at the county government center to decry the “Marxist” teachings that are occurring in their beloved public school system.

But despite all of the fear-mongering, the fact is that critical race theory isn’t being taught in our schools—which is one reason why Juneteenth has barely registered on the calendar, even for me. I grew up with immigrant parents and spent my formative years at a Christian school; the only memorable thing I remember from learning about slavery as a child was my eighth-grade civics teacher telling the class slavery wasn’t really that bad because some of the white slaveowners worked side by side with the people they enslaved.

This idea, that somehow white slaveowners also were victims of slavery, persists today. Earlier this week, a historic former plantation in North Carolina took some heat for its planned Juneteenth celebration. The site, which is managed by a man who identifies as an “American man of African descent,” planned on hosting an event that would discuss white refugees and the plight of “massa” who no longer had anyone to “oversee” once slavery was outlawed.

Obviously, Republican members of Congress couldn’t resist taking the absurdity to new levels. First the Senate unanimously approved a measure to make Juneteenth a federal holiday. Meanwhile, its Republican members are pushing the national panic button and alerting their constituents about policies that would almost certainly prevent students from learning what the holiday is really about. Sen. Tom Cotton (R-Ark.), for instance, set up a hotline where military service members could send in complaints about critical race theory being “pushed” on them. He tweeted that the “problem” was “worse than we thought.”

We've received hundreds of whistleblower complaints about critical race theory being pushed on our soldiers.

The problem is real—and worse than we thought.

He did not answer the basic question of how exactly one would celebrate Juneteenth in Sen. Cotton’s critical race theory–free regime. Perhaps it would commemorate the day white slaveowners lost their property.

Aside from the implicit racism and their need to cling to white supremacy whenever they feel it might be challenged, another basic problem conservatives have with critical race theory is that its framework is antithetical to the myth of America’s founding. Nebraska’s Republican Gov. Pete Ricketts offered his own historical perspective on the matter as the arbiter of “our country’s core values.”

The American founding is based on the idea that “that all men are created equal, that they are endowed by their Creator with certain unalienable Rights, that among these are Life, Liberty and the pursuit of Happiness."

Conservatives still believe this country was founded on the ideal that all men are created equal, and that ideal should never be challenged. Never mind that this week some of us will celebrate the official end of the state-sanctioned enslavement of Black people—this myth of equality endures today, and is so powerful it can mask the reality of the racial hierarchy that’s been in place since white colonizers first arrived. That the performative moral panic over critical theory is hitting its crescendo just when we celebrate the end of slavery will further whitewash the very history we’re supposed to be honoring. But maybe that’s for the best. What is there to celebrate when half the country can’t, or won’t, even truthfully reckon with our past?