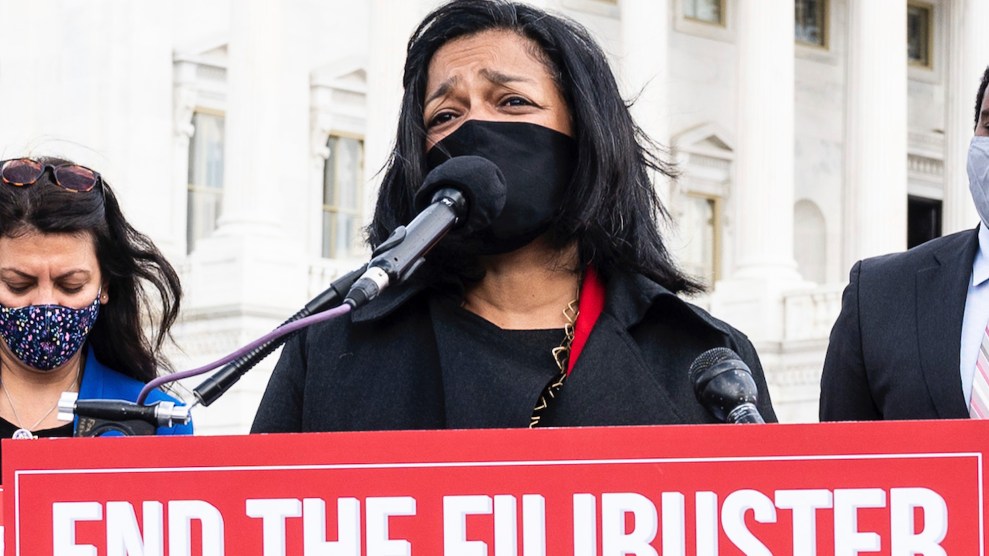 The White House insists it’s not done trying to cut a deal with Republican lawmakers on its jobs and infrastructure agenda, but by the end of last week, few Senate Democrats seemed eager to keep bipartisan talks going. “It’s just not particularly genuine,” Sen. Sherrod Brown (D-Ohio) told Politico about the GOP’s $928 billion counteroffer to President Joe Biden’s infrastructure proposal, which was more than $1 trillion short of what the White House is seeking. Senate Majority Leader Chuck Schumer (D-N.Y.) wrote a letter to his Democratic colleagues on Friday informing them that they “must pass comprehensive jobs and infrastructure legislation this summer.” Work on that legislation, he added, would happen “with or without the support of Republican Senators.”

Biden and White House aides have spent the last several weeks in talks with GOP lawmakers in hopes of finding common ground by a self-imposed Memorial Day deadline. As the talks continued, Congress’ typically vocal left flank held back. “We’ve tried to give a little bit of space on these bipartisan negotiations because we understand there are some Senate Democrats who need to see that,” Rep. Pramila Jayapal (D-Wash.), the chair of the Congressional Progressive Caucus, told me on Friday.

The holiday came and went, but the negotiations will continue­, a strategy the White House believes will showcase Biden’s bipartisan bona fides and reflect well his party within the halls of Congress and among the voting public. But progressive lawmakers refused to hold back any longer. On Friday afternoon, the Congressional Progressive Caucus issued a statement urging for Biden’s economic proposals to move through Congress quickly via the budget reconciliation process, which requires only a simple majority in both chambers to pass. It also insisted that the priorities the left flank have coalesced around—including universal child care, affordable housing, and lowering drug prices—be included in that package. The dwindling attempts at bipartisanship have opened the door to debate within the Democratic party, and a return to the dynamic that shaped the COVID relief bill Congress passed in March.

As the fate of Biden’s economic legacy looks increasingly to rest on a party line vote, Congress’ left flank is threatening to assert itself in a narrowly divided House and Senate to quash legislation that doesn’t meet their demands. As they prepare, in the words of one aide to a progressive lawmaker, they are “telegraphing clearly and openly” to Biden, Schumer, and House Speaker Nancy Pelosi (D-Calif.) that their exertion of pressure is forthcoming.

But in terms of what those hard lines might actually be, well, there aren’t any yet. “Our approach has been to push really hard on every front—with the Speaker, with the White House, with the Senate, to make sure our priorities get in,” Jayapal explained. “I wouldn’t say, necessarily, that there’s a way to say ‘This is the point at which we vote ‘no.’’”

Since Democrats retook the House in 2018, progressives have threatened to disrupt proceedings if they don’t get their way. So far, they’ve rarely exercised that power, and the CPC and the “squad” have yet to behave like the liberal equivalent of the tea party representatives that made former House Speakers John Boehner and Paul Ryan’s lives hell. But as Democrats negotiated the COVID relief package earlier this year, the left flank in the House drew a hard line on keeping a proposal to raise the federal minimum wage to $15 an hour in the final bill. Their push succeeded until the Senate parliamentarian ruled that raising the federal minimum wage did not qualify for consideration under the budget reconciliation process. Progressives had threatened to vote against the final bill if Vice President Kamala Harris did not exercise her power to overrule the parliamentarian but, ultimately, they stood down, unwilling to block Biden’s first major legislative effort.

For the jobs and infrastructure package, the Congressional Progressive Caucus identified five of its top issues back in April. They include $450 billion in Medicaid funding for caregiving, universal child care, a massive expansion of affordable housing and efforts to combat homelessness, and major investments in climate jobs and climate justice—including a large-scale “Civilian Climate Corps” modeled after the New Deal’s Civilian Conservation Corps. These negotiating points also include a push to lower the cost of prescription drugs, dropping the Medicare eligibility age, and providing a roadmap to citizenship for undocumented essential workers, Dreamers, and TPS recipients. Nearly all of these proposals, such as lowering the cost of prescription drugs, go far beyond the scope and price tag the White House has suggested. Others, such as the caregiving investments, closely mirror Biden’s proposals and simply hold the line.

For now, Jayapal and other progressive leaders are assessing what appetite fellow lefty lawmakers have for making demands during reconciliation negotiations—and if there is enough support to force their inclusion in the final package, according to several sources familiar with the conversations. The demands may end up being more narrow than what the list outlined initially: On climate, for example, some members are considering drawing a line in the sand on keeping natural gas from qualifying as clean energy in both the clean energy standard the White House seeks to pass through Congress and its related line items in the jobs proposal.

“We have to be very careful, and we have to negotiate what can get through.”

But a lot of progressive energy seems focused on getting the White House to “yes” instead of forcing its hand with a “no.” Last Thursday, for example, more than 150 House Democrats signed a letter pushing the president to support an expansion of Medicare, something the White House has not included in its various economics proposals. As she explains the public strategy, Jayapal acknowledged the risks of being too forceful and doesn’t sound ready to endanger any reconciliation bill yet. “We have to be very careful, and we have to negotiate what can get through,” she told me. “But I think that’s why we’re trying to show that there is support across the caucus for something like Medicare expansion,” which she described as “a big, bold, popular, populist thing to do.”

Other progressives echoed Jayapal’s combination of concern and caution. “Talk to me in a week or two,” Rep. Jamaal Bowman (D-N.Y.) told me last week when I asked if he’d vote against a package that doesn’t include progressive priorities. “Nothing to say at this moment, but we’ll see, going forward. We want to be as green as possible and as equitable as possible overall.” Rep. Marie Newman (D-Ill.) said progressives aren’t going to “cheap out” and “give up on all the things we need to do” that are outlined in Biden’s proposal. But as far as whether the left flank should take a hard line, Newman offered no specifics. “We do have a powerful voice, and we are going to use it,” she said.

Progressives in the Senate Democratic caucus, meanwhile, face similar considerations. Sen. Bernie Sanders (I-Vt.) has led the push to expand Medicare and lower the price of prescription drugs in the next reconciliation package. Sen. Elizabeth Warren (D-Mass.) has been demanding even greater spending than what Biden proposed for affordable child care. When I asked her in May if she would hold up a Senate infrastructure package if it did not include child care, she was still undecided. But, she warned, “I want to make clear that when the infrastructure train moves forward, child care will not be left in the station once again.”

Forcing these progressive priorities into a reconciliation package is one thing, but passing it is another. In the end, the $15 federal minimum wage proposal did not have full support among Senate Democrats, and its exclusion from the COVID relief bill helped the party avoid a skirmish that could have tanked the package altogether. A similar dynamic would surely play out if line items from the progressives’ wish list made their way to the Senate. Sen. Joe Manchin (D-W.V.), for example, said last month that he wants to see a more “traditional” infrastructure proposal that avoids additional funding for child care and health care. And so far, it’s the moderates like Manchin who have demonstrated a willingness to actually slam the breaks on legislation that don’t suit them.