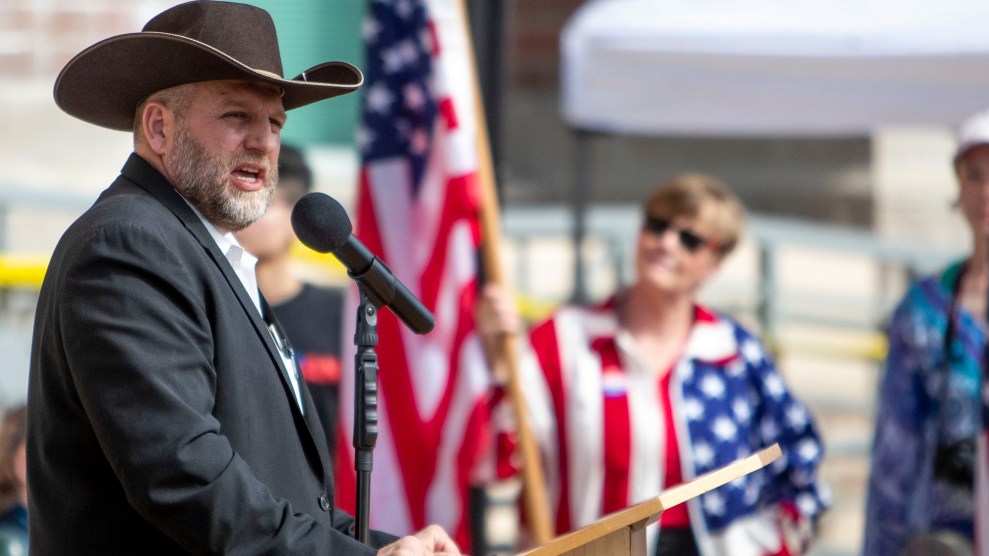 Ammon Bundy speaks to a crowd of about 50 followers in front of the Ada County Courthouse Saturday, April 3, 2021 in Downtown Boise. Darin Oswald/Associated Press

The media often describe Ammon Bundy as an “anti-government activist.” But on Saturday evening, the man Harry Reid once dismissed as a “domestic terrorist” officially announced his plans to try to become the government by running for governor of Idaho. “The establishment is losing their minds right now,” he said with a laugh after making the announcement. “I must be really really scary to these people.”

Bundy is one of 14 children of Cliven Bundy, the famously obstreperous Nevada rancher who, since 1994, has refused to pay his grazing fees to the federal government for the use of public lands. In 2014, Cliven and his family led an armed standoff in Bunkerville, Nevada, with the Bureau of Land Management when the agency attempted to impound Cliven’s cows, which graze on hundreds of acres of land near the Gold Butte National Monument. After armed militia groups flocked to the scene and hundreds of protesters intervened, the BLM was forced to retreat. Two years later, Ammon led an armed 41-day takeover of the Malheur National Wildlife Refuge to protest the incarceration of two Oregon ranchers convicted of arson on public land. The occupation ended when police and FBI ambushed the occupiers, including Ammon and his brother Ryan, as they left the refuge one day to go to a meeting. Police shot and killed one of the occupiers, LaVoy Finicum, after he appeared to reach for a gun. Ryan Bundy was also shot in the shoulder but survived.

Ammon, Cliven, Ryan, and dozens of other people involved with both the Nevada and Oregon standoffs were arrested and charged with conspiracy and other federal offenses. But the Bundys were acquitted by a jury in Oregon, and their Nevada case ended in a mistrial after the judge ruled that the prosecutors had improperly withheld evidence from the defense. The failure of the federal government to hold the Bundys accountable for either episode has earned them a cult following in the West, even as environmentalists despise them for promoting attacks on public lands.

“From here on out I’m going to identify as a man, an American man, using he/him pronouns—a married man, married to a beautiful woman,” he said, making an anti-trans joke that would play well on Fox News.

Ammon is not the first Bundy to run for office. His brother Ryan ran for governor of Nevada in 2018, winning less than 2 percent of the vote. The Bundys’ political beliefs are often misunderstood, as they get lumped in with other anti-government militia types who tend to flock to them. But they are devout Mormons. They believe that the Constitution was divinely inspired and that members of the LDS church are charged with protecting it, whatever it takes, including running for office apparently.

Even so, when Ammon first submitted papers to run for office in Idaho, they were rejected because he wasn’t registered to vote in the state. The Republican Party of Idaho has also denounced him and is refusing to support him. “Republicans are the party of law and order, and Ammon Bundy is not suited to call himself an Idaho Republican let alone run for Governor of our great state,” Tom Luna, the state GOP chair, said in a statement earlier this month.

Nonetheless, Bundy seems to be gearing up for a bona fide campaign, with a fancy new website and some canned campaign videos. His campaign kickoff took place at a park in Meridian, Idaho, near Boise, where his famous father appeared and served “Bundy Beef” to the assembled crowd. His stepmother, Carol, and brother Ryan also made an appearance. Boise Freedom Tabernacle Church Pastor Diego Rodriguez played MC for the event, claiming that it had drawn more than 700 people. But video from the announcement showed a lot of empty chairs and sparse attendance.

Bundy appeared in the bright sunlight with a stack of notebooks as props, explaining that they were the journals he kept while he was in solitary confinement in a federal prison, where he spent the better part of two years awaiting trial on charges he was never convicted of. On one of the notebooks from September 2017, he noted that he had written that “at some time that I should run for governor of Idaho.” Reflecting his religious fervor, he added, “I felt that these thoughts were not my own thoughts,” suggesting that they were a divine intervention.

Bundy joked that his running for governor had never been a surprise, given that the minute he filed the paperwork to run it was international news. So he explained that he’d come to the park to make a bigger announcement: “From here on out I’m going to identify as a man, an American man, using he/him pronouns—a married man, married to a beautiful woman,” he said, making an anti-trans joke that would play well on Fox News. “Of course I’m kidding. But, man, who would have ever thought America would have become so ridiculous.”

His real announcement of the day was the unveiling of his plan to “keep Idaho Idaho,” which can now be found on his new campaign website.

“Idaho is losing those elements that make us love her so much,” he said. “Idaho is sliding down the path and ceasing to be the Idaho we love.” He told the crowd that he intends to bring the Republican Party back to its roots and to rid it of corruption. The specifics in the plan include eliminating income and property taxes, reclaiming federal public lands for the state, promoting “health freedom”—that is, opposing mandatory vaccines and allowing unproven cancer treatments to flourish so anyone can access them—and turning Idaho into a tax haven like Delaware, where people can hide their money from prying eyes and state tax authorities.

Since the beginning of the pandemic, Bundy has been a thorn in the side of the current Idaho governor, Brad Little, who has not yet said whether he plans to run for reelection. Drawing on the cult following he developed after defeating the federal government in Oregon and Nevada, Bundy has linked arms with anti-vaccine activists and protested pandemic-related lockdowns and mask mandates.

In April 2020, he organized protests at Little’s house after a police officer arrested a woman in Meridian, near Bundy’s home, who refused to leave a playground that had been closed as a COVID prevention measure. He also organized church services in defiance of Little’s stay-at-home orders and has encouraged his supporters to back businesses that refused to shut down during the lockdown or to require masks. Bundy believes that wearing a mask is an affront to God and says that it’s against his conscience to wear one.

The aspiring governor has been arrested five times since August, when he led a group of maskless and armed protesters who pushed their way into the Idaho State Capitol Building during a special session of the legislature; they had been told that COVID social-distancing rules would not allow them to attend. The following day, he was arrested and charged with trespassing at the Capitol for sitting at the press table and refusing to leave. Officers handcuffed him and wheeled him out of the building in an office chair. (The incident apparently led the Idaho state police to buy a special jogging stroller–like cart to transport uncooperative suspects.)

Officials banned him for a year from the Capitol grounds after the incident. Nonetheless, he returned to the building the following day and was arrested again. He was scheduled to be tried on misdemeanor charges in March, but because he refused to wear a mask in the courthouse, security wouldn’t let him in the building and instead arrested him again for failing to appear. His trial on the trespassing charges is scheduled for June 28. In April, he was arrested again, twice in two hours, for violating the order banning him from the Capitol grounds. This time police wheeled him out in the special cart.

It’s not clear how all his pending criminal cases will affect his ability to campaign.

Bundy is one of a growing number of Republicans who have lined up to run for the Idaho GOP gubernatorial nomination. He might not even be the most controversial. Also running for governor is the current lieutenant governor, Janice McGeachin, who, like Bundy, has a cozy relationship with militia groups like the Three Percenters. She has been critical of Little’s public health measures to combat the pandemic, which she has suggested was not real. Last month, while Little was out of town at a Republican Governors Association meeting in Nashville, McGeachin seized the opportunity to ban mask mandates across the state. Her order stripped local public health departments of their power to set local public health rules, and Little overturned it once he got home, calling it an “abuse of power.”

The presence of Bundy and McGeachin in the race promises to make the 2022 GOP gubernatorial debate at least as lively as the one in 2014. That year, the field included Walt Bayes, a man with a chest-length beard who talked about Biblical prophecy and whose primary qualification was that he’d once gone to jail for homeschooling his 16 children. Another candidate, Harley Brown, was also one reason that the televised debate was aired with a 30-second delay, in anticipation of what Mother Jones writer Tim Murphy described as “rampant cussin.’”

As Tim wrote back then:

Brown—who wore his customary leather vest and leather hat, has the presidential seal tattooed on his shoulder, two cigars in his right breast pocket, and is missing several prominent teeth—used his closing argument to wave a signed certificate from a “Masai prophet” that confirmed that he would one day be president of the United States.