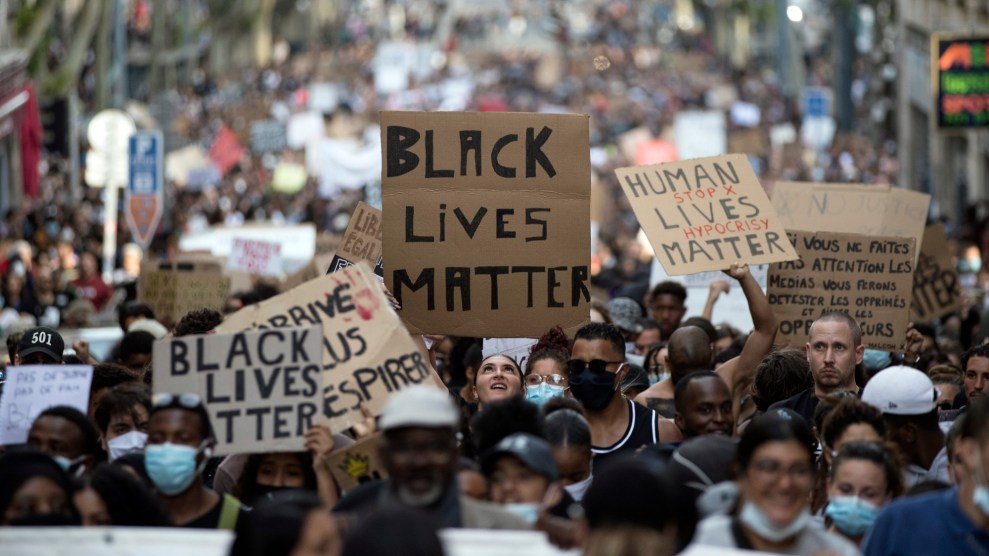 It has now been a year since white police officer Derek Chauvin murdered George Floyd by kneeling on his neck for approximately nine minutes, while a crowd of bystanders begged him to spare the 46-year-old Black man’s life. In the immediate aftermath of the killing, while the coronavirus pandemic was still ravaging communities, thousands of people in every single state took to the streets to protest what took place in Minneapolis and the structural forces that led to it. Former president Donald Trump’s excessive and violent response only seemed to further legitimize the actions of the protesters. And for a moment, it seemed as if we were on the precipice of meaningfully addressing systemic racism.

But then the inevitable happened.

If there was a genuine racial reckoning in the aftermath of Floyd’s murder in Minneapolis, it’s already been eclipsed by the standard white backlash that has followed each Black uprising. In those long days of summer protests that were constantly met with police violence, while a president was hellbent on ignoring a raging pandemic that was disproportionately killing Black people, it seemed as if many of society’s most egregious injustices were on full display for the public. It wasn’t just police reform that dominated the national conversation, but economic and health inequities too. (Not to mention the fact that a presidential campaign was also taking place.) So, after what appeared to be a national effort to reckon with systemic racism and white supremacy, how did we fare? Are we a more tolerant, just, and equitable society today than we were before?

So, after what appeared to be a national effort to reckon with systemic racism and white supremacy, how did we fare? Are we a more tolerant, just, and equitable society today than we were before?

There are some obvious markers of racial progress: Trump lost the 2020 presidential election and while another white man was elected in his place, the first woman, Black person, and Asian-American has become vice president. But if we get get more specific, the progress feels stalled. According to Mapping Police Violence, a research and advocacy group, police have killed at least 1,068 people since Floyd was murdered last year. There is no federal database of police killings, but since 2015 police have killed on average of 1,000 people per year. The coronavirus pandemic is still impacting people of color disproportionately. In Washington, DC, 8 of 10 new infections are Black people. People of color generally are most impacted by low wages across industries, but efforts to raise the minimum wage have been met with pushback from corporations and timidity from liberal politicians.

Then there are the public opinion shifts about Black Lives Matter. Last year, in the aftermath of Floyd’s death, support for the movement was at an all-time high, with even many Republicans expressing approval in higher numbers. Today, thanks to a decline among whites and Republicans, which are two groups that often overlap, support for BLM is at a new low, to levels even lower than before Floyd’s death. The New York Times researchers who analyzed the data suggested that the surge in approval in 2020 was due to the shocking nature of the viral video of Floyd’s grueling death, not an actual embrace of the Black Lives Matter movement. All of this adds up to what appears to be yet another example of the inevitable backlash that occurs after a broad movement for racial justice takes place. It’s a cycle that repeats itself throughout American history.

The history of Civil Rights era is often portrayed with Rev. Dr. Martin Luther King Jr. as the widely hailed and appreciated protagonist. In reality, when he was murdered by a white supremacist in 1968, King had a 75 percent disapproval rating. In the 1960s, public opinion was “mixed” on civil rights despite, or perhaps because of, the efforts by the Johnson administration to address some of the systemic racism with passage of the Civil Rights Act in 1964 and the 1965 Voting Rights Act. When then President Lyndon B. Johnson signed the Voting Rights Act into law, King still wasn’t satisfied. He began pushing for broader social and economic policies, like anti-militarism, labor rights, and fair wages. That was a bridge too far for many white Americans, who began to see him as being too aggressive. And thus the backlash began.

In 1965, King was joined with other prominent civil rights leaders such as John L. Lewis, who later served 17 terms in Congress, for a protest march in Selma, Alabama. They were met with dogs, fire hoses, and police violence; the scenes appeared on televisions in millions of households. Polling from that year showed that the public largely sided with the protesters over the state of Alabama, in much the same way that the footage of Floyd’s final minutes and the brutality inflicted on protesters became impossible to ignore. In the end, however, the general sympathy for the demonstrators didn’t last, but antipathy to King’s efforts to expand civil rights protections endured.

Today’s “bridge too far” policy seems to be defunding the police. While the idea gained some traction during the height of last summer’s protests, the position remains only marginally popular among even Black people and urban residents. Now, violent crime rates are up across cities in the United States and conservative pundits have latched onto the idea that rising crime is due to “defunding the police” and the actions of Black Lives Matter as a whole. It is easy to ignore the fact that most cities increased their police budgets this year. It is also apparently impossible for some conservatives to make the connection between upticks in crime and a pandemic that has led to 590,000 and counting deaths—coupled with massive unemployment and economic hardship for many.

Meanwhile, white America has begun their acts of retaliation against the George Floyd-inspired protests. It’s obvious in the anti-protest laws taking hold in Republican legislatures, the campaign to suppress the votes of people who vote for Democrats, and the rewriting of America’s history that casts powerful racists in a better light. Yes, a few statues of Confederate heroes have been taken down, and former officer Derek Chauvin has been convicted on three counts of murder for the death of George Floyd. But when it comes to sustained and concerted efforts to end police brutality and close the racial wealth gap, life has changed very little.

Why does this pattern keep repeating? Why does it seem like with every pivotal moment, like when thousands were taking to the street to protest police brutality, we eventually end up with some version of the status quo? Perhaps it’s the final result of the inherent friction between two competing ideas that are embedded in the American experience: That racial inequality is pervasive in our society—and the illusion that it’s actually a problem of the past.