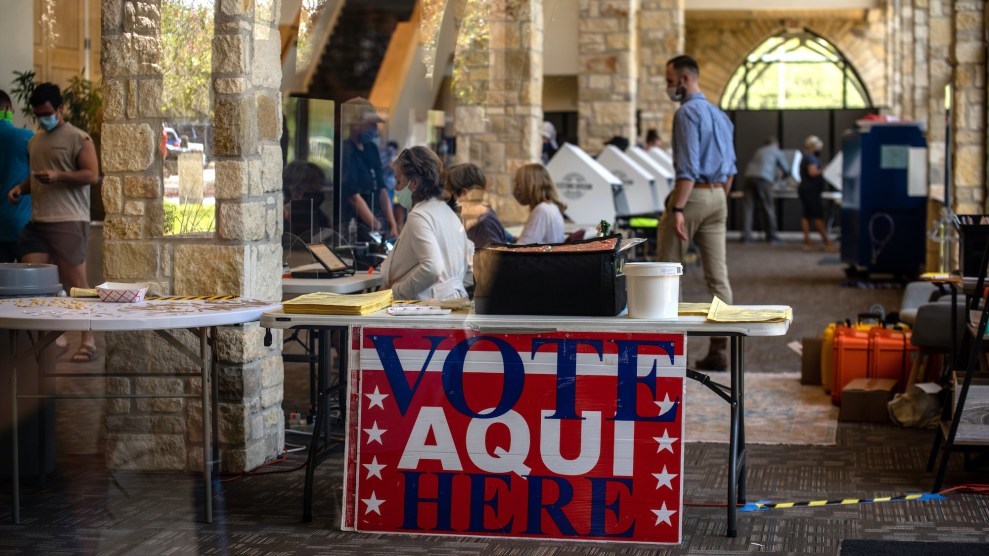 Texas already has some of the country’s most restrictive voting laws, and, accordingly, some of the lowest voter turnout. Now, after a dark-of-night political maneuver on the second-to-last day of the state’s legislative session, Republican lawmakers in the Texas Capitol are on the verge of making voting even harder. On Sunday morning, just before sunrise, the Senate approved a bill containing a broad array of voting restrictions that Democrats say are designed to suppress turnout of Black and Hispanic Texans.

If the bill passes the state House of Representatives and is signed by Gov. Greg Abbott—both of which are expected—the Texas chapter of the NAACP will immediately file a lawsuit against it, chapter President Gary Bledsoe said at a news conference Sunday afternoon, the Dallas Morning News reports.

The bill would ban drive-through voting and 24-hour voting, both of which were used extensively last year in and around Houston, according to the New York Times. Among its many restrictions, the bill would limit voting by mail for people with a disability, add new ID requirements for mail-in voting, and make it a felony for election officials to send mail-in ballots to voters who did not request them. And it would set limits on early-voting hours, such as requiring polls to open at 1 p.m., not 9 a.m., on Sundays—which could impact popular “Souls to the Polls” held by many Black churches, the Morning News notes:

Bledsoe specifically cited concern with the bill’s limits on early voting hours because that method is disproportionately used by Black and Latino voters. He also took issue that it further empowers partisan poll watchers and puts new criminal penalties on voting officials and assistants, he said.

“That’s going to have a chilling effect on folks wanting to be election officials because now if you make a simple mistake you may have committed a felony. That’s serious business,” he said. “We need to protect our election officials so we can continue to do business in our communities.”

In order to pass the bill, state lawmakers suspended rules requiring legislation to be public for 24 hours before receiving a final vote. Democrats reportedly planned to try to stop it in the House using procedural actions.

The Texas bill is one of hundreds of voter suppression bills introduced in state legislatures this year, as my colleague Ari Berman has reported. Heritage Action for America, a conservative dark money group, was involved in orchestrating some of the bills, according to leaked video of the group’s executive director—including Texas’ effort, Berman writes:

Texas is the next big fight for Heritage. [Executive Director Jessica] Anderson said Heritage Action wrote “19 provisions” in a Texas House bill that would make it a criminal offense for election officials to give a mail ballot request form to a voter who hadn’t explicitly asked for one and would subject poll workers to criminal penalties for removing partisan poll challengers who are accused of voter intimidation. It’s expected to pass in the coming days.

“Gov. Abbott will sign it quickly,” Anderson said. She warned of corporate opposition to the bill, following actions by Georgia-based companies to distance themselves from the restrictive voting bill there. “American Airlines, Dell, they’re coming after us,” she said. “We need to be ready for the next fight in Texas.”