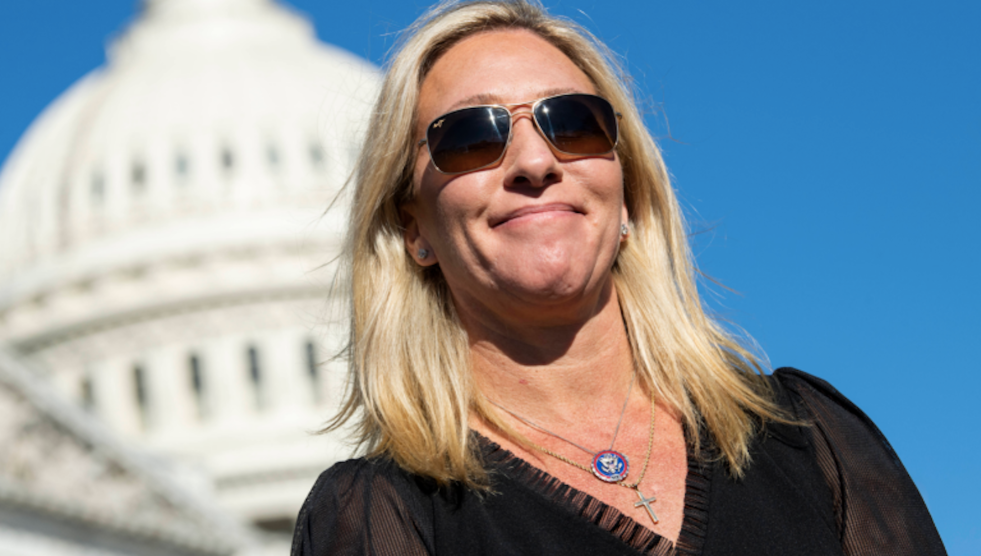 In the months since getting stripped of her committee assignments after old social media posts resurfaced confirming her penchant for hate-filled conspiracy theories, not to mention her support for the execution of top Democrats, Rep. Marjorie Taylor Greene has been on a desperate campaign to remain in the headlines.

The freshman congresswoman from Georgia has tried everything: She’s posted CrossFit videos of herself aggressively swinging on a pull-up bar—an exercise routine she claimed protected herself against COVID (it did not). Greene’s also gone on tour with Rep. Matt Gaetz, the Florida congressman under investigation over allegations that he had sex with a minor and paid for sex, for a series of “America First” rallies.

This is my Covid protection 💪#MakeAmericaHealthyAgain

Now comes her latest attempt to troll her way into the news cycle: Greene literally chasing Rep. Alexandria Ocasio-Cortez down the halls of Congress and shouting batshit questions about antifa at the Democrat. The Washington Post reports that Greene, who has repeatedly demanded over Twitter that Ocasio-Cortez debate her in person, was outside the House chamber on Wednesday night when she spotted Ocasio-Cortez and twice shouted, “Hey Alexandria!” as the New York congresswoman walked away.

Ocasio-Cortez kept on walking, minding her own business—something that appeared to only intensify Greene’s stalking. From the Post:

When Ocasio-Cortez did not stop walking, Greene picked up her pace and began shouting at her and asking why she supports antifa, a loosely knit group of far-left activists, and Black Lives Matter, falsely labeling them “terrorist” groups. Greene also shouted that Ocasio-Cortez was failing to defend her “radical socialist” beliefs by declining to publicly debate the freshman from Georgia.

“You don’t care about the American people,” Greene shouted. “Why do you support terrorists and antifa?”

Ocasio-Cortez finally turned around and exchanged words with Greene, but it’s unclear what was said. Her office has since raised security concerns over the aggressive confrontation. Meanwhile, Greene has repeatedly trumpeted the incident on social media, and again, accused Ocasio-Cortez of a litany of false allegations. House Majority Leader Nancy Pelosi has since signaled her support for an ethics investigation into Greene’s “verbal assault” of Ocasio-Cortez.

You chickened out bc you are too scared to debate me about your Socialist Green New Deal.

Members of Congress do NOT support terrorism & shouldn’t be afraid to debate their legislation.

Of course, this isn’t the first time Greene has harassed her colleagues. In February, Greene drew widespread condemnation, even from Republicans, after she displayed an anti-trans flag directly outside the office of Rep. Marie Newman, whose daughter is transgender. “There are TWO genders: Male & Female. Trust The Science!” Greene’s flag read. A month earlier, Rep. Cori Bush relocated her office away from Greene after Greene “berated” her in the hallway.

Greene’s disruptive antics have reportedly irked her fellow Republicans, but so far, not enough to warrant any form of formal admonishment. That’s not exactly a surprise after House Republicans overwhelmingly voted against her removal from committee assignments after the abhorrent flood of social media posts that had surfaced. Minority leader Rep. Kevin McCarthy even went as far as to insist that Greene was genuinely contrite over her past behavior, a dubious claim that attracted a standing ovation from other Republicans in the room.

Fast forward to now, and McCarthy and the rest of the GOP have comfortably aligned themselves with Donald Trump and some of the former president’s worst behavior. With a spine like that, Republicans are all but certain to ignore workplace hostilities within Congress and the growing HR problem Greene poses.