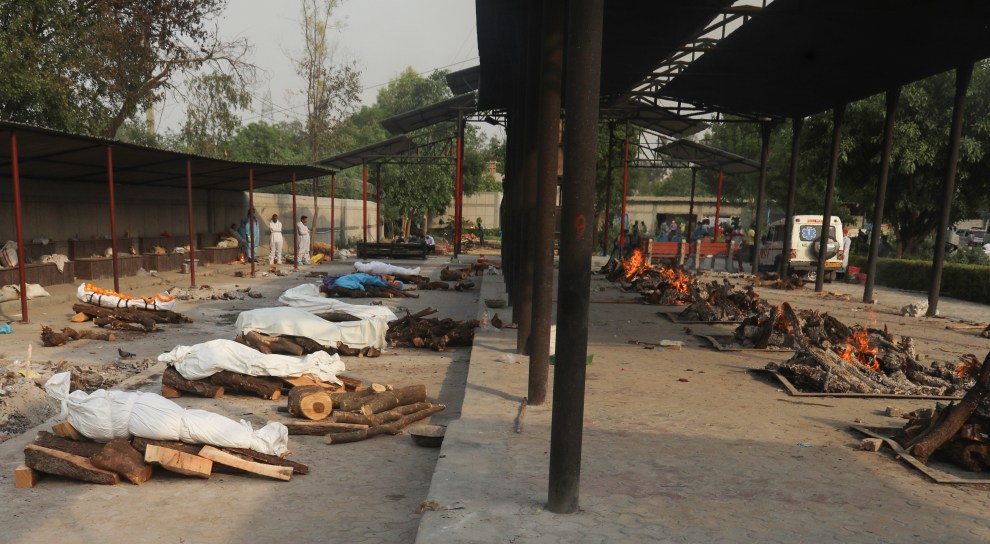 April 30, 2021, New Delhi, India: Bodies of those who lost their life to COVID-19 wait to be cremated during a mass cremation.Naveen Sharma/ZUMA Wire

In October last year, I gave birth to a new baby. I couldn’t wait for my dad and my partner’s parents in India to come to the United States and hold their newest grandchild for the first time. We waited for COVID-19 cases to go down and started planning trips early this year.

Everything was going according to plan—we’d started looking for flight tickets. About six weeks ago, my dad got his first dose of Covishield, the Indian version of the Astrazeneca vaccine, in Mumbai, India. COVID cases and deaths had started slowing down, and my conversations with my dad revolved around how India, due to its population density, hot weather, or some other unknown factor, had successfully dodged the worst of the virus.

So many parents have died during this wave that the government has created a special hotline for children orphaned due to the virus to provide resources.

India’s health minister, Harsh Vardhan, announced early March in a medical press conference in the country’s capital, “We are in the end game of the COVID-19 pandemic in India.” He assured us that India had an oversupply of vaccines and was ready to distribute them to the rest of the world.

Other family members and neighbors in our apartment complex in Mumbai had already received their doses. Although my father was anxious to meet his grandson, he dilly-dallied getting his first shot. He wanted to wait and watch the side effects of the vaccine and wrap up some of his board meetings before he could take time off.

Then, a few weeks ago, everything changed. COVID cases began to creep up in India, then they skyrocketed within a span of days. My dad got his second shot this week, under very different circumstances. For days, he’d wake up in the morning and visit four different vaccine centers scattered across the city, only to hear that they had run out of doses. Finally, on Monday, he queued up at the center early in the morning and waited for four hours along with what he estimates to be thousands of people.

India now has the highest number of reported coronavirus cases in a single day worldwide since the beginning of the pandemic. On Tuesday, India reported more than 300,000 cases and more than 2,000 deaths. These numbers are an official count—experts say the real death toll could be five to 30 times greater. Hospitals have run out of beds, and people have died on their doorsteps. Cities are making makeshift mass graves to accommodate the death toll from the virus. So many parents have died during this wave that the government has created a special hotline for children orphaned due to the virus to provide resources.

With crumbling infrastructure and a failing healthcare system, people have turned to social media platforms to find ICU beds and oxygen tanks. Actors, activists and other high profile celebrities are using the platform to connect people to hospitals, deliver food and provide information about oxygen. India’s soccer team captain Sunil Chhetri even allowed others to use his Twitter handle to amplify voices of those in need.

Hey, everyone. As promised, I'll be handing my Twitter account to some of the real-life heroes over the coming weeks, to try and help them get their messages of support and relief to a wider audience.

A friend of mine said that every family WhatsApp group has turned into a COVID support group to exchange information about cases in the neighborhood, distribute food for those in need, and access information about tests and hospital beds. Germany, France, the United Kingdom and the United States pledged aid in the form of oxygen cylinders and ventilators. After celebrities, researchers and vaccine makers complained of vaccine hogging, the US finally agreed to lift the ban on exporting some raw materials required for making the vaccines.

Dear @potus, @JoeBiden – the US has something like a vaccine glut. India is in dire straits. Please overturn this export ban ASAP. https://t.co/tOSFGRbN6O

Respected @POTUS, if we are to truly unite in beating this virus, on behalf of the vaccine industry outside the U.S., I humbly request you to lift the embargo of raw material exports out of the U.S. so that vaccine production can ramp up. Your administration has the details. 🙏🙏

Technology companies with Indian-origin executives, such as Google and Microsoft, pledged financial support.  Under pressure, the United States agreed to donate unused doses of the AstraZeneca vaccine to India as vaccine shortages surge in the country.

The details of why the situation in India got so bad so fast are a little fuzzy. The surge in large part may have been fueled by relaxing measures too soon. Everything in the country opened up in February after vaccinations arrived: there were large, unmasked election rallies, mass gatherings for religious festivals, cricket matches in stadiums filled with spectators. India has fully vaccinated only 2 percent of its population. We know that the new B.1.617 variant is potentially more transmissible and lethal, and we’re not sure how well the available vaccines work against it.

The part that I am still trying to wrap my mind around is how unpredictable this virus has been. It feels like just yesterday that we started making plans for my dad and my partner’s parents to visit. Now, it would be almost impossible for them to get here: On Friday, the Biden administration announced that the United States will severely limit travel from India starting early next week.

When I talked to my dad last night, he told me that the Indian government has been paralyzed, but people are turning to each other to help. It reminded us of a time 15 years ago when Mumbai was heavily flooded. All Mumbai residents—”Mumbaikars” in Hindi—remember exactly where they were and what they did on that day. And even before there was social media, residents helped each other out. Gymnasiums were converted into makeshift canteens that fed hundreds. People opened their homes to strangers who were stranded and offered them food and a cell phone so they could tell their loved ones that they were doing okay. My dad called us using one of those borrowed cell phones.

Media and politicians applauded the city’s resilience, and I bought that story back then. But now I wonder, what other choice did the people have? Helping each other out in the face of failing infrastructure is the only shot a poor country has at survival.

It feels like my heart is split and my mind is processing two different realities. As more and more people get vaccinated in the United States, I feel palpable hope that we’re inching closer to a post-pandemic world. But I also see how my future for this year looks so starkly different from my family’s life in India. My dad has hardly left his apartment building for weeks now. His everyday act of bravery is double masking to take a walk to keep his sanity intact or buy groceries so he can stay alive. Despite these stark differences in our realities, we both desperately want the same thing. We both hope that in a few months, somehow, we’ll be able to meet and he’ll be able to hold his grandchildren in his arms.