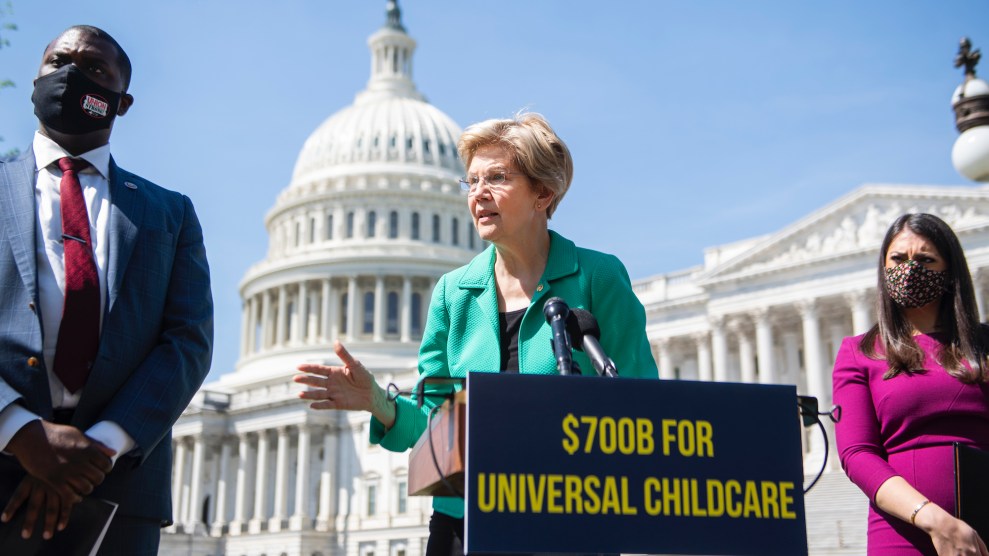 When Sen. Elizabeth Warren (D-Mass.) ran for president, one of the first policies she unveiled to establish herself as the wonk candidate was a proposal for universal child care and pre-K. Warren delivered her speech for last summer’s virtual Democratic National Convention from a pandemic-shuttered daycare and used her five minutes of primetime to elevate child care as “the basic infrastructure of this nation.”

She’s kept up the refrain for child care as Democrats hasten to secure an economic legacy beyond the pandemic relief package the party passed earlier this year. On Thursday, Warren released a report calling for a $700 billion investment in child care and early education funding over 10 years to support working parents in a post-pandemic economy. While it’s not surprising to see Warren championing child care, the report is notable as a subtle rebuke of President Joe Biden for not devoting enough funds to child care in his infrastructure plans and offers a warning shot to lawmakers who might consider ditching child care as the party crafts its infrastructure agenda over the coming months.

“Child care is about parents having equal opportunity in the workplace,” Warren says. “That was true before the pandemic, but the pandemic just ripped back the cover that had hidden much of the child care problem from public view.”

When I asked if she’d hold up whatever jobs or infrastructure package her chamber considers if it doesn’t include a sizable investment in child care, she hesitated. “We’re not there yet,” Warren says. But she still offered an unmissable warning, should that be the case. “I want to make clear that when the infrastructure train moves forward, child care will not be left in the station once again.”

The report—co-signed by Sens. Ron Wyden (D-Ore.) and Tina Smith (D-Minn.), as well as Reps. Katherine Clark (D-Mass.), Rosa DeLauro (D-Conn.), Sara Jacobs (D-Calif.), and Mondaire Jones (D-N.Y.)—argues that a lack of affordable child care is preventing parents from returning to the workforce, an issue compounded by the fact that women have suffered the greatest job losses during the pandemic. It cites census data estimating that 10 million mothers with school-age children were out of the workforce at the beginning of 2021—1.4 million more unemployed mothers compared to the beginning of 2020. Because child care workers are nearly all women—and nearly half are women of color, according to the National Women’s Law Center—the report suggests that major investments in the industry would yield more equitable economic outcomes for groups of workers who have been both underemployed and underpaid.

Warren’s report also argues that the current child care subsidy system is outdated and includes arduous requirements. For example, the current federal child care subsidies, provided through the Child Care and Development Block Grants, are only available to parents who work or attend job training, thus limiting access for those who might be in the process of seeking employment but haven’t secured it. And because roughly half of the families lived in areas with an inadequate supply of child care before the pandemic—and thousands of centers closed as the coronavirus raged—Warren’s report suggests that major investments could help build child care centers and hire workers where few options currently exist.

The $700 billion Warren and her allies are pushing for greatly exceeds the $425 billion Biden has proposed for child care and early learning across his two economic proposals, the American Jobs and Families Plan. Under Warren’s proposal, wealthier families would also qualify for federal support, and funding would cover children up to age 13—unlike Biden’s plan, which only supports children up to age 6. One of the biggest differences in the price tag stems from the wages that caregivers earn in each plan: Warren requires providers to earn salaries comparable to local public school teachers, while the White House’s plan sets a $15 minimum wage. “That should be the floor,” Warren tells me of Biden’s wage proposal. “People who run child care centers have an enormous responsibility. They are running complex businesses that require substantial experience. They should be paid accordingly.” And Warren says that the continued warning signs from April’s jobs report are a “stark reminder” of child care’s crucial role in a functioning economy.

Child care is just one piece of what President Biden hopes to achieve with his reimagining of the economy in a post-pandemic world. Reversing climate change, jump-starting American manufacturing, and other priorities compete with child care for funds in Biden’s agenda. But Lindsay Owens, the interim executive director of Groundwork Collaborative, a left-leaning think tank, says Biden would do well to trust Warren on this being a signature achievement. Owens, who also worked for Warren from 2014 to 2018, points to the Consumer Financial Protection Bureau, Warren’s pet project during the Great Recession, as a crucial and lasting outcome of the last financial crisis. “She’s written the book on the factors holding back women’s labor force participation,” says Owens, referring to the Warren’s 2003 book, The Two Income Trap. “Biden should take his lead from her on this too, and move forward with a child care plan that meets the needs of families.”