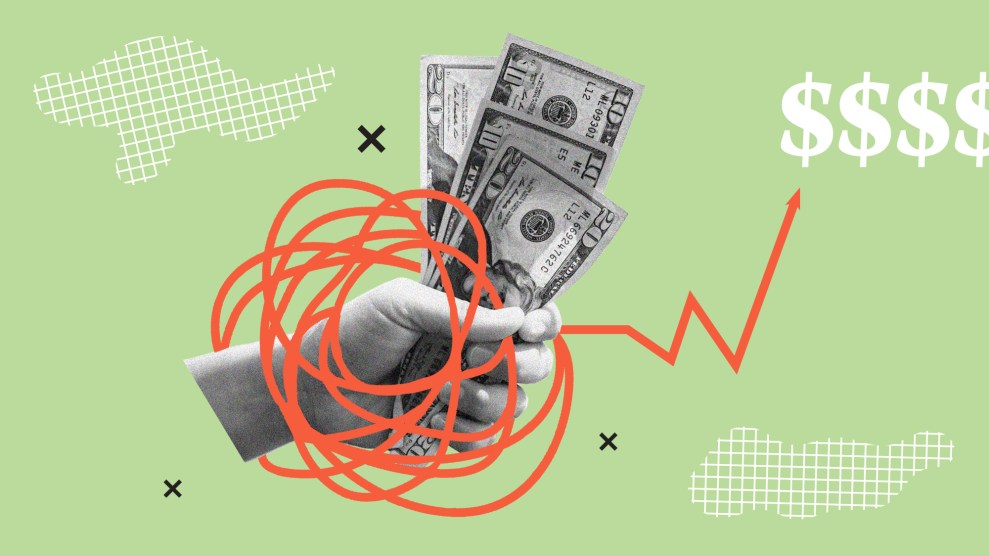 Days before the November 2020 election, the Trump administration issued a new rule that paved the way for a surge of predatory payday lending. Now, hundreds of consumer advocates, more than two dozen Democratic and Republican state attorneys general, and numerous Democratic lawmakers are calling on Congress to roll this rule back, ahead of a fast-approaching government deadline that allows lawmakers to invalidate Trump-era regulations.

Their concern is that the “true lender” rule—one of the last moves by the Trump-era Office of the Comptroller of the Currency, a federal office that supervises nationally chartered banks—upends more than a century of legal precedent to make it easy for non-bank financial institutions, like payday lenders or fintech companies, to evade state-level interest limits, lending at sky-high rates and trapping low-income customers in debt.

“If the rule is not overturned, then predatory lending will explode in all 50 states,” says Lauren Saunders, associate director of the National Consumer Law Center.

According to its many critics, this rule enables what are referred to as “rent-a-bank schemes.” These first cropped up in the early 2000s, and they work like this: In 45 states and the District of Columbia, long-term loans from companies that are not banks are subject to strict interest rate caps. To get around these limits, payday lenders began partnering with banks—who are exempt from state interest rate caps—in a sort of loan ownership hot potato: The payday lenders bring in customers willing to borrow money at high rates, and then ink a deal with a bank that will dole out the loan money to those borrowers. The loan paperwork lists the bank as the originator of the loan. Once that paperwork is complete, the bank sells most of the loan back to the high-cost lender (or an affiliate). The result, then, is that the payday lender has masqueraded as a bank for the purposes of charging borrowers more money.

“Payday lenders and others find one rogue bank to put their name on the loan agreement and claim that gives them carte blanche to charge 200 percent [interest] in states that only allow 36 or 24 percent,” explains Saunders.

For the two decades that they’ve existed, these sorts of schemes have been kept at bay by the “true lender doctrine,” a legal principle that requires courts to determine the lender on a loan by assessing which actor draws the most economic reward from the transaction. As state attorneys general and financial regulators sought to fight back against rent-a-bank schemes in the early 2000s, this standard served as a safeguard, enabling courts to evaluate whether high-cost lenders were camouflaging themselves to evade interest rate caps, and eventually curbing the spread of these sorts of partnerships.

The Trump administration’s last-minute rule, critics say, undoes this protection by telling courts that the true lender is simply the one listed on the loan agreement. In practice, this means that as long as a bank is named on the paperwork as the originator of the loan, nothing else matters—even if a payday lender is actually administering the loan and reaping most of its profit.

“This is literally taking the paper form and elevating it over the loan’s substance,” North Carolina Attorney General Josh Stein explained during a Senate hearing about the rule last week. “Calling it the ‘true lender rule’ is an upside down farce; it is more accurate to call it the ‘fake lender rule.'”

Some payday lenders have already made use of the new rule to defend their use of rent-a-bank schemes. In September, a veteran in California sued payday lender OppLoans for engaging in a rent-a-bank partnership with a Utah bank, saddling him with a loan with 160 percent interest, despite California’s 36 percent rate cap. The lender sought to have his lawsuit thrown out this past January by citing the brand-new rule, which had gone into effect just a few weeks prior. OppLoans told the court that based on this federal rule, a national bank was the true lender on the loan, and thus it had done nothing wrong.

In another case, a New York City restaurant owner took out $67,000 in loans for her business during the pandemic that ended up with a 268 percent effective interest rate, far above New York’s cap. She sued Axos Bank for engaging in a “rent-a-bank” scheme with World Business Lenders, the payday firm that serviced her loan. The bank defended itself against her claims in a letter to the court last November, arguing that “as recently made clear the Office of the Comptroller of the Currency, even such arrangements are proper.”

In the months since President Biden’s inauguration, consumer groups and Democrats have ramped up their calls for Congress to undo the new rule through the Congressional Review Act. This federal law allows Congress to invalidate regulations issued by federal agencies within a certain timeframe. The deadline to undo last-minute regulations from the Trump era falls in mid-May.

The fate of this rule is of particular importance as Americans continue to weather the pandemic economic crisis and accumulate consumer debt. While many have used COVID-era federal aid, like stimulus checks, to pay down debt, millions of others have loaded on more debt to get by during the pandemic. The need for fast, small-dollar loans like those offered by payday lenders is only likely to grow as federal aid programs, including expanded unemployment benefits, begin to expire this summer and fall.

The concern among consumer advocates is that this will intersect with the Trump administration’s rule to accelerate an ongoing trend: the disproportionate harm by payday lenders in Black and Latino communities. High-cost lenders have been found to concentrate their brick-and-mortar stores in communities of color, while their online counterparts target customers with lower credit scores, which themselves reflect racial wealth disparities.

If Congress opts to leave the rule in place, consumer advocates say they’ll pursue other avenues. A group of eight state attorneys general are already challenging the rule in court, and it could also be undone by yet more rule-making by Biden’s Office of the Comptroller of the Currency. The Biden administration has yet to nominate a permanent director for the bank regulator, after some progressives took issue with Biden’s rumored first pick, claiming he was too friendly to the banks he’d be tasked with regulating.