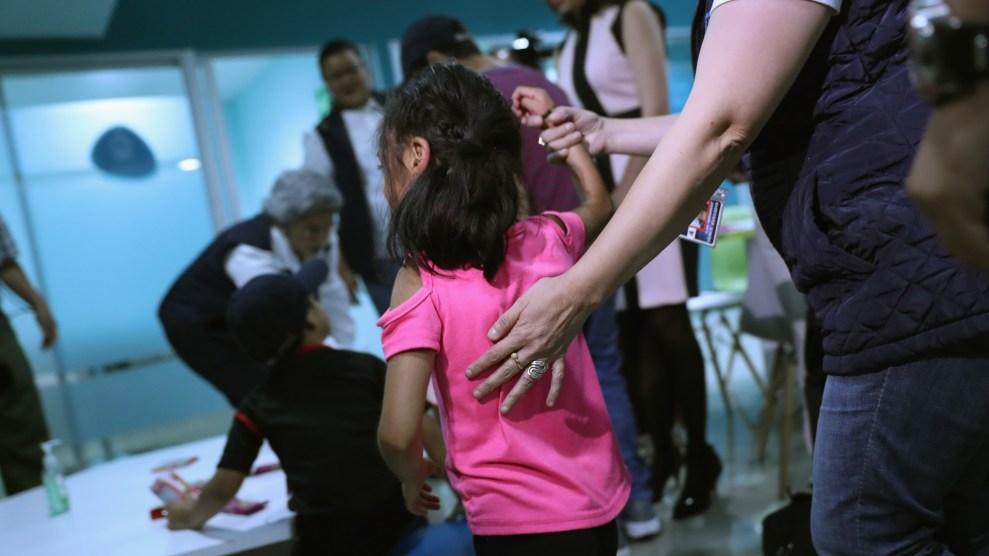 A child separated from her parents as part of the Trump administration's "zero tolerance" policy was later reunited with them in Guatemala.John Moore/Getty

The Trump administration denied parents the opportunity to reunite with their children before being deported under its roundly condemned zero-tolerance policy that separated families. A new watchdog report by the Department of Homeland Security’s Office of Inspector General released on Monday found that between July 2017 and July 2018, US Immigration and Customs Enforcement returned as many as 348 parents to their home countries without their children and without documenting if they had agreed to be separated. In some cases, the investigation concluded, ICE knowingly removed parents without their children even though those parents explicitly stated that they wanted to bring their children with them. “There was no policy or standard process requiring ICE officers to ascertain, document, or honor parents’ decisions regarding their children,” the report states.

“There was no policy or standard process requiring ICE officers to ascertain, document, or honor parents’ decisions regarding their children.”

This latest OIG investigation adds to the mounting evidence of the sheer negligence or cruel intent behind the practice of prosecuting migrant parents and separating families at the border. In January, my colleagues Fernanda Echavarri and Noah Lanard wrote about another damning report by the Department of Justice’s OIG describing how Trump officials implemented the policy at the “expense of careful and appropriate consideration of the impact of family unit prosecutions and child separations”:

Parents spent as long as two months before talking to their kids after being separated because the government failed to create a system for keeping them in contact. Jails became dangerously overcrowded as they filled with separated parents sleeping in triple bunks. Sex offenders were released because US Marshals were overwhelmed by the policy. All the while, the Justice Department’s top leaders kept pressing for more separations.

The new OIG report is a response to complaints from deported parents, including plaintiffs in a class action lawsuit, who claimed they were not allowed to be reunited with their children prior to deportation, despite repeated assertions to the contrary by DHS officials, who insisted that all parents being sent back had chosen to leave their kids in the United States. The report points to several instances when DHS officials made such statements, including then-DHS Secretary Kirstjen Nielsen, who in her congressional testimony on December 20, 2018 stated: “Every parent had the choice to bring the child back with them when they were removed. The ones who did not bring the children with them made the choice not to have the child accompany them.”

The investigation also found ICE’s record- keeping regarding parents’ decisions “significantly flawed” and identified 63 instances where, prior to being deported, parents waived the right to reunification either orally or having signed a form that couldn’t be located. Some of the agency’s records didn’t include what information had been provided to parents before they made a decision, nor whether the parents had been offered the option to reunite with their child in the first place. But at least in some cases, the report concluded, “ICE’s removals of parents without their children were intentional, and not just inadvertent incidents resulting from human error or inaccurate records.”

A DHS spokesperson told NBC News that the report’s findings “are a tragic reminder of how parents and children were cruelly separated by the prior administration.”

More than 5,500 families have been separated under the policy, which former President Donald Trump ended in June 2018. My colleague Fernanda Echavarri recently wrote about Keldy Mabel Gonzáles Brebe de Zúniga, a mother who reunited with her two sons after almost four years. But as of early May of this year, there were still at least 1,000 parents who needed to be reunited with their children after being deported.

According to Mother Jones reporter Noah Lanard, in his story about a Guatemalan mother who hasn’t seen her daughters since 2017: “In early February, [the Biden administration] created a task force to figure out how to reunify separated families to ‘the greatest extent possible.’ Soon after, the administration announced that Michelle Brané, a highly respected advocate for migrant women and children, would serve as the task force’s executive director. The group’s initial report and recommendations are due by June. And even with seamless logistics, no government action will undo the years of trauma that parents and children have now endured.”