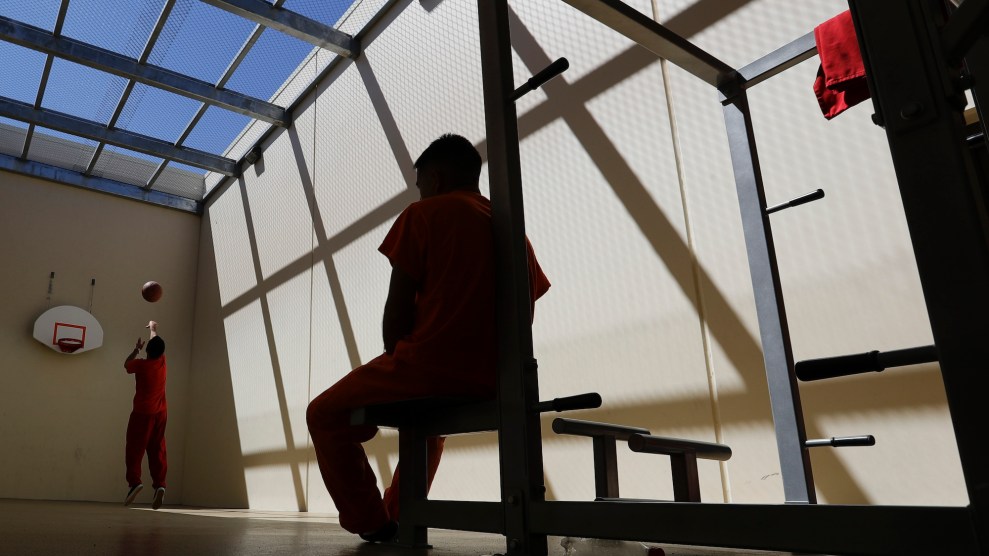 People detained by Immigration and Customs Enforcement exercise at the Adelanto detention center in California in 2019.Chris Carlson/AP

On Thursday morning, federal judge Lawrence Vilardo criticized Immigration and Customs Enforcement for failing to provide medically vulnerable people it is detaining in upstate New York access to COVID-19 vaccinations. “You’re doing nothing to get them the vaccine,” Vilardo told the government attorney representing ICE. “Nothing. Zero.”

In late February, Vilardo ordered ICE to come up with a plan for vaccinating people detained at its immigration detention center in Batavia, a town about 40 miles east of Buffalo. ICE responded on Wednesday with a plan that wasn’t much of a plan at all. Essentially, the government said in a court filing that it’s waiting for New York health officials to provide vaccines that it can administer at the detention center. On Thursday, Vilardo said that the response violated the constitutional rights of people being held in Batavia.

John Peng, the Prisoners’ Legal Services of New York attorney who argued the case on Thursday, says at least 50 of the roughly 260 people detained at Batavia are eligible to be vaccinated. None are over 65, but they qualify as part of New York’s Phase 1b, which covers people with medical conditions like diabetes.

Nationally, ICE’s plans for vaccinating the roughly 14,000 people in its custody have caused confusion. ICE has often implied that it’s up to states to provide vaccines for immigrant detainees. States, meanwhile, have often assumed ICE is handling the vaccinations. Compared to ICE, the Bureau of Prisons has worked closely with the federal government’s vaccination team to obtain doses. More than 52,000 inmates in its custody had been vaccinated by February 22.

ICE spokesperson Alvin Phillips did not respond to a question about how many people in the agency’s custody have been vaccinated. He said ICE’s Health Service Corp has a plan for vaccinating people at Batavia “once ICE receives the vaccines from New York state public health officials.” Phillips could not comment further due to the pending litigation.

Batavia staff have been asking New York health officials for vaccines since January, but haven’t got them, according to Wednesday’s filing. If ICE won’t release people eligible for the vaccine, Prisoners’ Legal Services of New York has proposed booking appointments for clients at vaccination sites. ICE would then be responsible for taking people to the appointments.

The government called that plan “unworkable” in its Wednesday brief. “Not only would such transportation pose a logistical problem for [Batavia] staff,” the government argued, “but the danger to the public and risk of flight by detainees would also be prohibitive, given that such vaccination sites are often in wide-open buildings, with dozens, if not hundreds, of persons present.”

The idea that it can’t take people to vaccine appointments because they’ll run away or attack someone is absurd. ICE detention is civil detention, meaning that detainees are not being held for criminal offenses. About half of people in ICE custody this fiscal year have had no criminal history. Many more have had convictions for minor offenses. Those with more serious criminal histories have already served their time. ICE routinely takes people to hospitals and immigration courtrooms, usually in shackles.

Despite not allowing lawyers to book vaccine appointments or providing vaccinations within the detention center, the government argues that Batavia detainees are not “being deprived of a meaningful chance to obtain the vaccine.” Vilardo was highly skeptical of that claim. He suggested the government was actually arguing that taking people to get vaccinated was too much of an inconvenience.

Peng, an Immigrant Justice Corps Fellow at Prisoners’ Legal Services, said his clients were being deprived of their constitutional rights by being detained without access to a vaccine they are eligible for under New York guidelines. Judge Vilardo agreed, saying that it was a constitutional violation to hold vulnerable individuals in a facility where it is impossible for them to get a vaccine that protects them from a life-threatening virus.

Vilardo was hesitant to order ICE to release detainees who are eligible for the vaccine, saying “I’m not a cowboy.” He directed Prisoners’ Legal Services to try to make appointments for its clients and provide a plan for the government to respond to by Monday. There will be another hearing next Thursday.

“These folks deserve a chance to get this vaccine,” Vilardo said. “I’m not going to let the United States ignore them.”