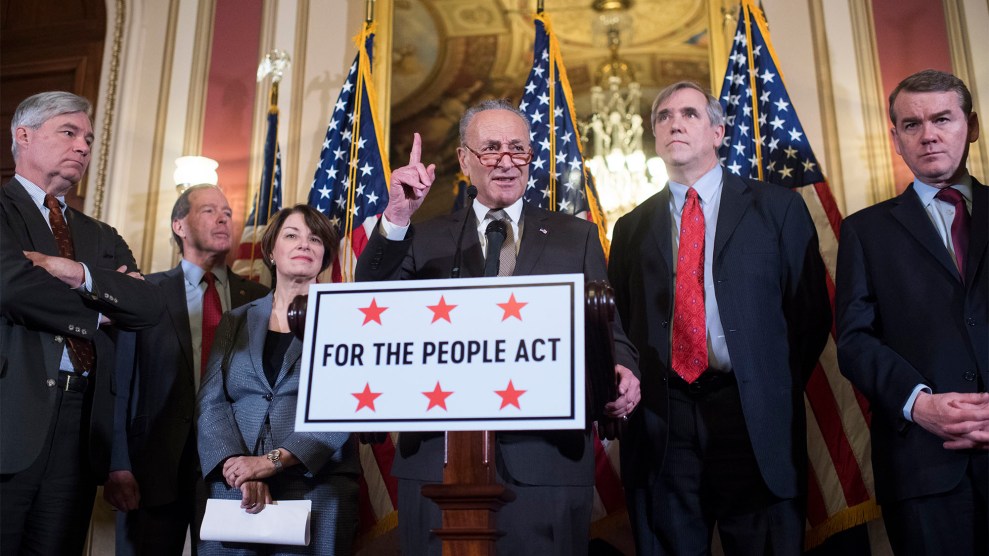 Senate Democratic Leader Chuck Schumer (N.Y.) conducts a news conference in the Capitol on the For the People Act on March 27, 2019.Tom Williams/CQ Roll Call/AP

With a supercharged assault on voting rights that includes introducing more than 250 new laws aimed at restricting voting in 43 states, the Republican Party this year has initiated a nationwide crusade against the foundation of American democracy. This week, House Democrats in Washington launched a counteroffensive that will soon move to the Senate, where this critical fight will likely lead to an all-out battle over how that chamber conducts its business.

On Wednesday, the House of Representatives passed HR 1, dubbed the For the People Act, the most significant democracy reform bill since the Voting Rights Act of 1965. The bill would go a long way toward thwarting the new GOP voter-suppression efforts by enacting a wide range of pro-voter measures for federal elections. This includes nationwide automatic and Election Day registration; two weeks of early voting in every state; the expansion of mail-in voting; the restoration of voting rights to people convicted of a felony who have served their time; restrictions on discriminatory voter-ID laws and voter purges; and the creation of independent redistricting commissions for House districts to prevent extreme gerrymandering. The bill also cracks down on dark money by implementing public financing for congressional campaigns, and it establishes new ethics rules for federal officeholders.

Nearly identical legislation passed the House in March 2019, but it was blocked in the Senate by then–Majority Leader Mitch McConnell (R-Ky.), who called it a “power grab” for Democrats. It has become an increasingly urgent priority for Democrats this year, following Donald Trump’s efforts to overturn the 2020 election, the insurrection at the Capitol, and the wave of GOP-backed proposals to restrict voting rights in key states, such as Georgia. The GOP wish list includes rolling back mail-in voting, restricting ballot drop boxes, limiting early voting, and repealing automatic voter registration.

After being passed in the House on a party-line vote, the measure is expected to be blocked once again by Republicans in the Senate—that is, unless Senate Democrats eliminate the filibuster, which would require a supermajority of 60 votes for passage. In the 50–50 divided Senate, it is highly improbable that the Democrats will be able to win over 10 GOP votes to defeat a Republican filibuster. So a Senate clash over HR 1 is likely to become a key front in the ongoing battle over the Senate filibuster. And Sen. Amy Klobuchar (D-Minn.), a chief sponsor of the voting rights legislation, tells me she supports killing the filibuster to pass this legislation.

“I would get rid of the filibuster,” Klobuchar says. “I have favored filibuster reform for a long time and now especially for this critical election bill.”

In the past, Klobuchar, who chairs the Senate Rules Committee, has indicated she was open to eliminating the filibuster, but these comments to Mother Jones are her most definitive statement to date. Though her Democratic colleagues Sens. Joe Manchin (D-W.Va.) and Kyrsten Sinema (D-Ariz.) have said they would not support abolishing the filibuster, Klobuchar notes that the spread of new GOP anti-voting bills boosts the need for Democrats to enact HR 1—and that increases the pressure to end or alter the Senate filibuster.

“We have a raw exercise of political power going on where people are making it harder to vote and you just can’t let that happen in a democracy because of some old rules in the Senate,” she says.

Klobuchar calls the GOP’s assault on voting rights “the defining issue of the year.” She adds, “We had an insurrection at the Capitol with rioters who were trying to literally dismantle our democracy. The fundamental issue is do people get to vote or not and are we going to make it easy for them to vote or are we going to put up barriers to make it impossible?”

It’s become clear since the November election that Republicans are doubling down on anti-democratic policies, such as voter suppression and gerrymandering, to consolidate their power at the state level and increase their odds of winning back control of Washington in 2022 and 2024. “Much of what HR 1 is trying to do is restore majority rule in America,” says Rep. John Sarbanes (D-Md.), the chief House sponsor of HR 1. “We’ve seen an effort to narrow participation in the political arena through voter suppression, partisan gerrymandering, the use of dark money. You put that together and that creates minority rule in America, which producers a lot of anger and frustration. That makes it easier for extreme elements to access the political space without accountability.”

The GOP’s intensified attack on voting rights at the state level has raised the stakes for Democrats in Washington. “It’s having a huge impact,” says Adam Jentleson, onetime staffer to former-Sen. Harry Reid (D-Nev.) and author of The Kill Switch: The Rise of the Modern Senate and the Crippling of American Democracy. “It demonstrates that Biden’s victory is, at most, a reprieve from the threat of minority rule by white conservatives. Short of urgent action by Democrats, Republicans will take back power despite representing a minority of voters.”

That makes the fight over voting rights a fight over the filibuster.  “I’ve always thought HR 1 would be the most likely place for the filibuster to come to a head,” says Jentleson. “It’s a question of existential survival for Democrats and democracy writ large. And Republicans will go to the mat to keep it from passing. You’ll never see 10 Republicans support it.”

Klobuchar plans to hold hearings on S 1, the Senate version of the voting rights bill, in the Rules Committee this month and then advance the bill to the Senate floor, setting up a potential showdown over the filibuster. Democrats have a few options at their disposal. They could end the filibuster outright with a simple majority vote (with Vice President Kamala Harris casting a tie-breaking vote), or they could abolish the filibuster only for election-related bills that are critical for democracy, an idea floated by Sen. Jeff Merkley (D-Ore.) They could also force Republicans to speak continuously on the Senate floor to sustain a filibuster—as was done in the old days—which would make it tougher for Republicans to wield the filibuster. Another option: lower the threshold for passing filibustered bills from 60 votes to 55 votes.

The filibuster was once the primary tool used to block legislation that would protect voting rights, such as a proposed law banning the poll tax. “In the 87 years between the end of Reconstruction and 1964, the only bills that were stopped by filibusters were civil rights bills,” Jentleson writes in his book. Abolishing the filibuster to pass HR 1 would be “poetic justice,” he says. “You would be ending the filibuster on an issue of civil rights.”