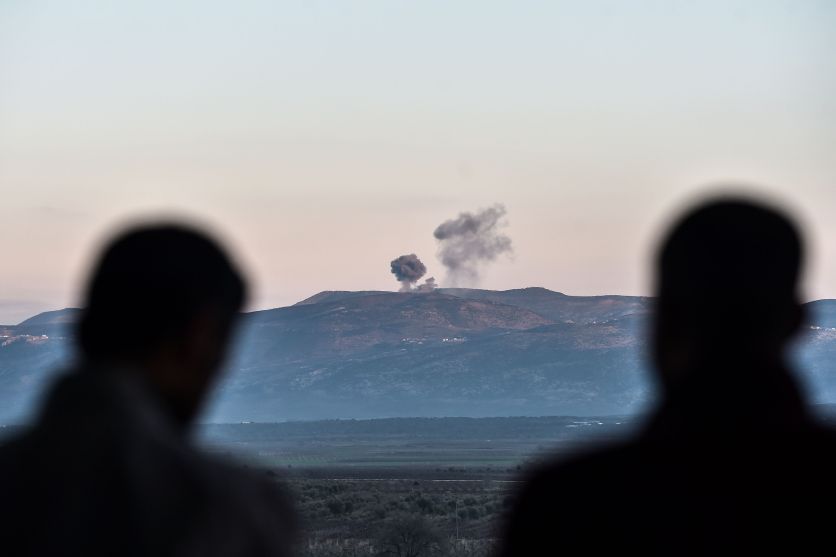 People look on as smoke rises on the Syrian side of the border in Hassa, near Hatay, southern Turkey, on January 28, 2018, as Turkish jet fighters hit People's Protection Units (YPG) positions.Ozan Kose/AFP/Getty

Turkey was demanding the social media giant block Facebook posts from the People’s Protection Units, a mostly Kurdish militia group the Turkish government had targeted. Should Facebook ignore the request, as it has done elsewhere, and risk losing access to tens of millions of users in Turkey? Or should it silence the group, known as the YPG, even if doing so added to the perception that the company too often bends to the wishes of authoritarian governments?

“I am fine with this,” wrote Sheryl Sandberg, Facebook’s No. 2 executive, in a one-sentence message to a team that reviewed the page. Three years later, YPG’s photos and updates about the Turkish military’s brutal attacks on the Kurdish minority in Syria still can’t be viewed by Facebook users inside Turkey.

The conversations, among other internal emails obtained by ProPublica, provide an unusually direct look into how tech giants like Facebook handle censorship requests made by governments that routinely limit what can be said publicly. When the Turkish government attacked the Kurds in the Afrin District of northern Syria, Turkey also arrested hundreds of its own residents for criticizing the operation.

Publicly, Facebook has underscored that it cherishes free speech: “We believe freedom of expression is a fundamental human right, and we work hard to protect and defend these values around the world,” the company wrote in a blog post last month about a new Turkish law requiring that social media firms have a legal presence in the country. “More than half of the people in Turkey rely on Facebook to stay in touch with their friends and family, to express their opinions and grow their businesses.”

But behind the scenes in 2018, amid Turkey’s military campaign, Facebook ultimately sided with the government’s demands. Deliberations, the emails show, were centered on keeping the platform operational, not on human rights. “The page caused us a few PR fires in the past,” one Facebook manager warned of the YPG material.

The Turkish government’s lobbying on Afrin-related content included a call from the chairman of the BTK, Turkey’s telecommunications regulator. He reminded Facebook “to be cautious about the material being posted, especially photos of wounded people,” wrote Mark Smith, a U.K.-based policy manager, to Joel Kaplan, Facebook’s vice president of global public policy. “He also highlighted that the government may ask us to block entire pages and profiles if they become a focal point for sharing illegal content.” (Turkey considers the YPG a terrorist organization, although neither the U.S. nor Facebook do.)

The company’s eventual solution was to “geo-block,” or selectively ban users in a geographic area from viewing certain content, should the threats from Turkish officials escalate. Facebook had previously avoided the practice, even though it has become increasingly popular among governments that want to hide posts from within their borders.

Facebook confirmed to ProPublica that it made the decision to restrict the page in Turkey following a legal order from the Turkish government — and after it became clear that failing to do so would have led to its services in the country being completely shut down. The company said it had been blocked before in Turkey, including a half-dozen times in 2016.

The content that Turkey deemed offensive, according to internal emails, included photos on Facebook-owned Instagram of “wounded YPG fighters, Turkish soldiers and possibly civilians.” At the time, the YPG slammed what it understood to be Facebook’s censorship of such material. “Silencing the voice of democracy: In light of the Afrin invasion, YPG experience severe cyberattacks.” The group has published graphic images, including photos of mortally wounded fighters; “this is the way NATO ally Turkey secures its borders,” YPG wrote in one post.

“We strive to preserve voice for the greatest number of people,” the statement said. “There are, however, times when we restrict content based on local law even if it does not violate our community standards. In this case, we made the decision based on our policies concerning government requests to restrict content and our international human rights commitments. We disclose the content we restrict in our twice-yearly transparency reports and are evaluated by independent experts on our international human rights commitments every two years.”

The Turkish embassy in Washington said it contends the YPG is the “Syrian offshoot” of the Kurdistan Workers’ Party, or PKK, which the U.S. government considers to be a terrorist organization.

Facebook has considered the YPG page politically sensitive since at least 2015, emails show, when officials discovered the page was inaccurately marked as verified with a blue check mark. In turn, “that created negative coverage on Turkish pro-government media,” one executive wrote. When Facebook removed the check mark, it in turn “created negative coverage [in] English language media including on Huffington Post.”

In 2018, the review team, which included global policy chief Monika Bickert, laid out the consequences of a ban. The company could set a bad example for future cases and take flak for its decision. “Geo-blocking the YPG is not without risk — activists outside of Turkey will likely notice our actions, and our decision may draw unwanted attention to our overall geo-blocking policy,” said one email in late January.

But this time, the team members said, the parties were embroiled in an armed conflict and Facebook officials worried their platform could be shut down entirely in Turkey. “We are in favor of geo-blocking the YPG content,” they wrote, “if the prospects of a full-service blockage are great.” They prepared a “reactive” press statement: “We received a valid court order from the authorities in Turkey requiring us to restrict access to certain content. Following careful review, we have complied with the order,” it said.

In a nine-page ruling by Ankara’s 2nd Criminal Judgeship of Peace, government officials listed YPG’s Facebook page among several hundred social media URLs they considered problematic. The court wrote that the sites should be blocked to “protect the right to life or security of life and property, ensure national security, protect public order, prevent crimes, or protect public health,” according to a copy of the order obtained by ProPublica.

Kaplan, in a Jan. 26, 2018, email to Sandberg and Facebook CEO Mark Zuckerberg, confirmed that the company had received a Turkish government order demanding that the page be censored, although it wasn’t immediately clear if officials were referring to the Ankara court ruling. Kaplan advised the company to “immediately geo-block the page” should Turkey threaten to block all access to Facebook.

Sandberg, in a reply to Kaplan, Zuckerberg and others, agreed. (She had been at the World Economic Forum in Davos, Switzerland, touting Facebook’s role in assisting victims of natural disasters.)

“Facebook can’t bow to authoritarians to suppress political dissidents and then claim to be just ‘following legal orders,'” said Sen. Ron Wyden, an Oregon Democrat who’s a prominent Facebook critic. “American companies need to stand up for universal human rights, not just hunt for bigger profits. Mark Zuckerberg has called for big changes to U.S. laws protecting free speech at the same time he protected far-right slime merchants in the U.S. and censored dissidents in Turkey. His priority has been protecting the powerful and Facebook’s bottom line, even if it means marginalized groups pay the price.”

In a statement to ProPublica, the YPG said censorship by Facebook and other social media platforms “is on an extreme level.”

“YPG has actively been using social media platforms like Facebook, Twitter, YouTube, Instagram and others since its foundation,” the group said. “YPG uses social media to promote its struggle against jihadists and other extremists who attacked and are attacking Syrian Kurdistan and northern Syria. Those platform[s] have a crucial role in building a public presence and easily reaching communities across the world. However, we have faced many challenges on social media during these years.”

Cutting off revenue from Turkey could harm Facebook financially, regulatory filings suggest. Facebook includes revenue from Turkey and Russia in the figure it gives for Europe overall and the company reported a 34% increase for the continent in annual revenue per user, according to its 2019 annual report to the U.S. Securities and Exchange Commission.

Yaman Akdeniz, a founder of the Turkish Freedom of Expression Association, said the YPG block was “not an easy case because Turkey sees the YPG as a terror organization and wants their accounts to be blocked from Turkey. But it just confirms that Facebook doesn’t want to challenge these requests, and it was prepared to act.”

In fact, Facebook doesn’t reveal to users that the YPG page is explicitly banned. When ProPublica tried to access YPG’s Facebook page using a Turkish VPN — to simulate browsing the internet from inside the country — a notice read: “The link may be broken, or the page may have been removed.” The page is still available on Facebook to people who view the site through U.S. internet providers.

For its part, Facebook reported about 15,300 government requests worldwide for content restrictions during the first half of 2018. Roughly 1,600 came from Turkey during that period, company data shows, accounting for about 10% of requests globally. In a brief post, Facebook said it restricted access to 1,106 items in response to requests from Turkey’s telecom regulator, the courts and other agencies, “which covers a range of offenses including personal rights violations, personal privacy, defamation of [first Turkish president Mustafa Kemal] Ataturk, and laws on the unauthorized sale of regulated goods.”

Katitza Rodriguez, policy director for global privacy at the Electronic Frontier Foundation, said the Turkish government has also managed to force Facebook and other platforms into appointing legal representatives in the country. If tech companies don’t comply, she said, Turkish taxpayers would be prevented from placing ads and making payments to Facebook. Because Facebook is a member of the Global Network Initiative, Rodriguez said, it has pledged to uphold the group’s human rights principles.

“Companies have an obligation under international human rights law to respect human rights,” she said.