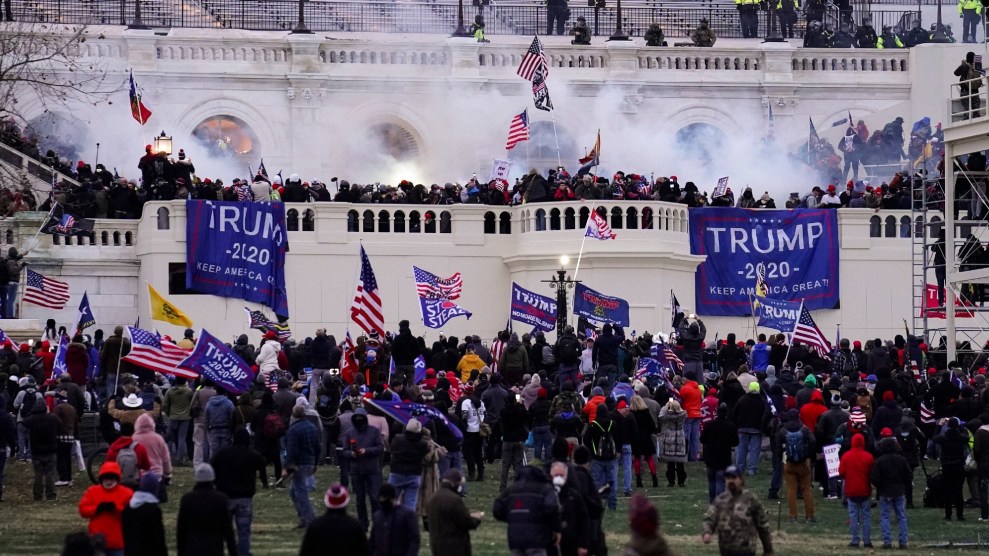 Senators investigating the lack of police preparation that contributed to the January 6 Capitol ransacking by right-wing extremists grilled FBI Director Christopher Wray on Tuesday about the intelligence the bureau had gathered, and with whom it had shared information prior to the attack.

Some lawmakers, though, used the opportunity to question Wray about the FBI’s domestic terrorism efforts. In his opening statement, Sen. Chuck Grassley (R-Iowa), the ranking member on the Senate Judiciary Committee, spent more time asking Wray about far-left extremists. “How do you plan to make your left-wing anarchist domestic extremism program as robust as your right-wing and white supremacist domestic extremism program?” he asked, after spending several minutes listing instances of violence and rioting allegedly undertaken by Black Lives Matter protesters, Antifa, and anarchists the previous summer.

Wray sidestepped the trap, noting that the FBI doesn’t classify domestic terrorism as “right” or “left,” but rather looks at ideological motivations, such as white supremacy and anti-government or anti-immigrant sentiments.

“Vandalizing a federal courthouse in Portland is a crime….But it is not equivalent to a violent attempt to overthrow the results of elections.”

But Sen. Dick Durbin (D-Ill.) fired back at Grassley’s disingenuous line of questioning. While he himself condemns left-wing violence, too, Durbin said, such violence pales in comparison with the spike of violent right-wing behavior America has witnessed under Trump. “Let’s stop pretending that the threat of Antifa is equivalent to the white supremacist threat,” he said. “Vandalizing a federal courthouse in Portland is a crime. It should be prosecuted to the full extent of the law. But it is not equivalent to a violent attempt to overthrow the results of elections, nor is it equivalent to mass shootings targeting minority communities.”

The agency’s lack of focus may help explain why an FBI memo outlining the credible threat of violence on January 6 was all but ignored by law enforcement agencies. During a Senate hearing last week, former US Capitol Police Chief Steven Sund testified that some officers in his department had received the memo, sent by the FBI’s Norfolk office on January 5, but that it was never brought up the chain of command. In fact, Sund claimed he only learned of the memo 24 hours prior to his testimony.

After more needling from Sen. Patrick Leahy (D-Vt.) about how the FBI monitors and assesses domestic terrorist groups, Wray made a stunning revelation: the FBI does not maintain lists of right-wing extremist groups such as the Proud Boys, Oath Keepers, or even the Ku Klux Klan because, he said, there’s no legal definition for a domestic terror group—just international terror groups. His revelation tracks with concerns Senate Democrats raised in a letter to Wray last week, accusing the FBI of “taking steps in recent years that minimize the threat of white supremacist and far-right violence.” Even Sen. Lindsay Graham (R-SC.), a diehard Trump loyalist, told Wray “it’s time” the FBI started to think about defining domestic terrorism organizations.

Wray described the Norfolk memo as “raw, unverified, uncorroborated” information that the FBI had gathered from online posts. The agency had shared it as an email to the Joint Terrorism Task Force, in a briefing at the bureau’s DC field office, and at a meeting at FBI headquarters that involved DC police. It also was shared through a law enforcement portal, Wray testified. But Sund, along with the former House and Senate Sergeants-at-arms Paul Irving and Michael Stenger, along with Metropolitan Police Department acting chief Robert Contee blamed the FBI for providing insufficient intelligence.

While the Norfolk memo remains undisclosed, the Washington Post reported that it contained at least one social media thread that called for violence on January 6: “Be ready to fight. Congress needs to hear glass breaking, doors being kicked in, and blood from their BLM and Pantifa slave soldiers being spilled. Get violent. Stop calling this a march, or rally, or a protest. Go there ready for war. We get our President or we die. NOTHING else will achieve this goal.”