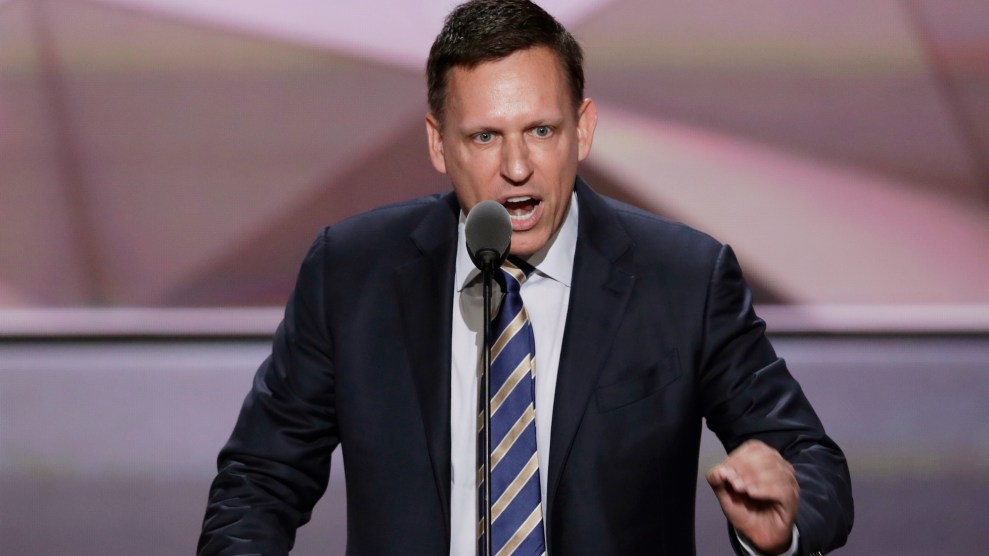 Silicon Valley venture capitalist Peter Thiel dropped an enormous bomb on the 2022 Ohio Senate race last month, donating $10 million to a super-PAC established to back J.D. Vance, the author of Hillbilly Elegy, who is considering a run for the seat that will be vacated by current Republican Sen. Rob Portman. Since the Citizens United decision in 2012, the flow of million-dollar or even multimillion-dollar checks has become relatively commonplace. But Thiel’s $10 million donation appears to be the largest contribution ever made to a super-PAC backing a single candidate for the Senate.

According to OpenSecrets.org, while there have been donations of $10 million or more to super-PACs that support presidential candidates or multiple candidates, there is only one other time that a single donor has given $10 million to a super-PAC that backs a single Senate candidate—and that was over the course of the campaign: In 2018, Citadel LLC, the hedge fund run by Kenneth Griffin, made several contributions totaling $10 million to support a super-PAC backing Rick Scott’s successful Senate bid.

And the timing of Thiel’s donation has enormous implications, potentially helping to rocket Vance to the head of the pack in what could be a crowded Republican primary. While the average amount spent by winning Senate candidates has crept up over the years, even by recent standards (in 2018, the average winning candidate spent $15.7 million), $10 million is an enormous amount for a candidate to have stashed and ready to be spent for him—when he hasn’t even declared his candidacy.

A number of potentially strong candidates have already announced their intentions to run for Portman’s seat, including former Ohio Treasurer Josh Mandel, who previously challenged Sen. Sherrod Brown, and Jane Timken, who is said to be an early favorite for an endorsement from former President Donald Trump. But there’s also a string of other hopefuls who may be deterred by such a show of force from a Vance supporter.

Thiel, politically known for his libertarianism, has a history of being willing to spend freely on political candidates and then shut the checkbook when he’s not interested. He wrote large seven-figure checks to support candidates in the past (a super-PAC supporting Portman received $1 million from a Thiel-owned firm in 2016). After initially backing Carly Fiorina in 2016, he switched his support to Donald Trump, stroking a $1.25 million check for a pro-Trump super-PAC. But after the 2018 cycle, he backed away from Trump, reportedly disenchanted with the president, cutting back his donations broadly and supporting Republicans further down the ticket, such as the $1 million he dropped in support of former Kansas Secretary of State Kris Kobach in his failed Senate bid.

Thiel’s $10 million donation went to a super-PAC formed last month called Protect Ohio Values, which on its website describes itself as “a network of grassroots conservatives committed to electing a Senator who will stand for and defend Ohio’s values in Washington, DC,” and tags Vance as the one to do that. According to the Cincinnati Enquirer, which first reported Thiel’s donation, the super-PAC also received a “significant contribution” from the conservative hedge fund billionaire Robert Mercer, who also backed Trump in 2016, but was far less involved in 2020. (Mercer also supported the same super-PAC backing Portman in 2016 that Thiel did).

Thiel and Mercer may stretch the definition of “grassroots conservatives,” but Thiel and Vance do have some personal history. Vance worked for one of Thiel’s venture capital funds after he graduated from law school, and Thiel later backed Vance’s own venture fund.