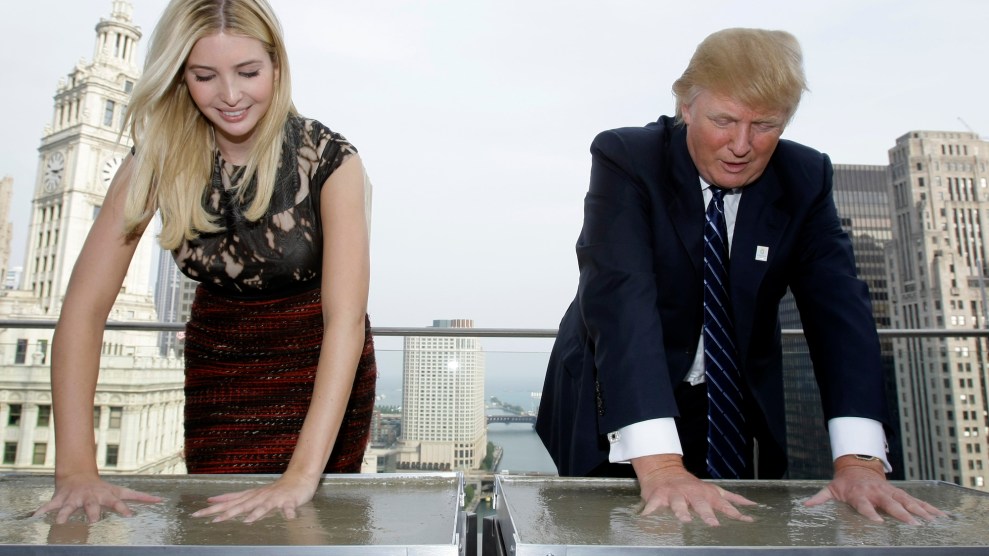 Manhattan District Attorney Cy Vance has expanded his criminal prosecution into former president Donald Trump’s business empire to include questions about a mysterious loan tied to Trump’s Chicago tower—the circumstances of which were first reported in detail by Mother Jones in 2019.

Vance began investigating Trump’s personal finances in 2018 after the Wall Street Journal reported details of the president’s hush money payment of $130,000 to adult film star Stormy Daniels. But the focus of his grand jury investigation has steadily expanded in the years since. A US Supreme Court decision last month granted Vance access to Trump’s tax returns, a major victory for the prosecutor who battled with Trump’s attorneys for more than two years over his subpoena to Trump’s accountants. While grand jury proceedings are secret, it was previously reported that Vance was looking at potential cases of tax, bank and insurance fraud involving multiple Trump-owned properties in Manhattan.

On Monday night, CNN reported that the investigation is also looking at the circumstances surrounding a loan that Trump took out in 2006 to help finance the construction of his hotel and condominium tower in downtown Chicago. Trump borrowed more than $600 million from German financial giant Deutsche Bank, and then took a second, smaller loan of $130 million from private equity firm Fortress Capital. When the 2008 financial crisis hit, and it became clear that Trump would be unable to make all of his payments to Deutsche Bank, Trump and the German bank fell into a bitter legal battle. The fight eventually was resolved several years later when Trump paid off part of the loan and then refinanced the rest with a separate division of the German bank that caters specifically to wealthy clients. But the Fortress loan simply seemed to disappear from public records with few clues as to how it was settled.

In turns out that in 2012, Trump resolved his outstanding debt with Fortress by paying them less than half of what they were owed—the amount had ballooned to as much as $150 million. It’s not uncommon for a lender like Fortress to agree to take much less than what they are owed if they believe they have little chance of recovering the full amount, or if going through the legal fight wouldn’t be worth the time, trouble, or expense. Trump never directly addressed the loan in public comments, but in several instances he implied that he hadn’t paid off the loan at a discount. Instead, he suggested that he had bought the loan from Fortress at a discount. While a seemingly small difference, it would have enormous tax implications for Trump. From Mother Jones‘ 2019 article on the loan:

When a lender forgives a portion of a loan, the IRS considers the unpaid portion taxable income. For instance, if a lender accepts $50 million in repayment of a $100 million debt, the borrower, in the eyes of federal tax authorities, has earned $50 million and owes tax on that. The tax could be as high as 39 percent. But big-time borrowers have devised a tactic to forestall paying taxes in cases in which they’re able to buy back their debt at a discount. They purchase the debt through a corporation, parking the loan within this entity to temporarily avoid realizing income. Debt parking falls into a legal gray area. “Maybe there are respectable ways that it could work, but I would call it kind of a scam to pretend you haven’t gotten rid of the debt,” says Daniel Shaviro, a professor of tax law at New York University.

When Trump first announced his run for office in 2015, his personal financial disclosure, a form required of all presidential candidates laying out their assets and debts, listed a mysterious debt of $50 million or more—to himself—related to the Chicago tower. In an interview with the New York Times, Trump hinted that this was the Fortress loan he had purchased from the lender. If this was true, it meant that he had been hanging onto an unpaid debt and perhaps avoiding paying the income tax he would’ve owed.

Except, as Mother Jones confirmed, the loan wasn’t sold to Trump, it was forgiven by Fortress.

To recap: Trump claims he bought a debt related to his Chicago venture, but neither of the two loans associated with this property appear to have been purchased. The Deutsche Bank loan was refinanced. The Fortress debt, according to sources with knowledge of the transaction, was canceled. And this raises a question: Did Trump create a bogus loan to evade a whopping tax bill on about $48 million of income?

New York attorney general Letitia James, who is leading a civil investigation into the Trump Organization that includes Chicago loan has confirmed the loan was forgiven, not sold, and according to court documents is examining whether the Trump Organization reported it properly to tax authorities. The Trump Organization has maintained that it was reported properly and all appropriate taxes have been paid—although they have never explained the nature of the loan on his personal financial disclosure. According to CNN’s reporting, Vance is now examining the same question as James, except his investigation is criminal.