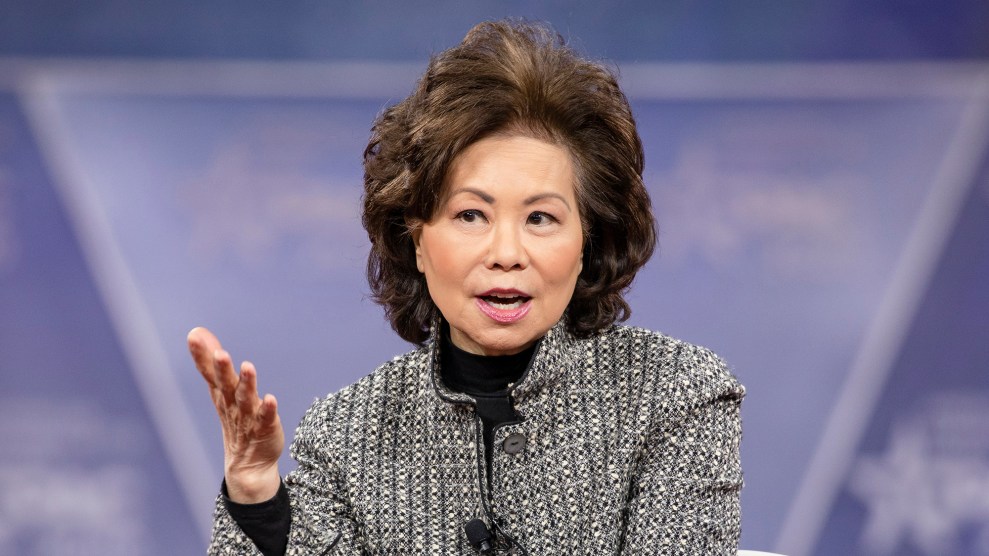 Two months after Elaine Chao resigned as secretary of transportation, in the wake of the January 6 attack on the Capitol, the Transportation Department responded to an October 2019 congressional request for an investigation of Chao, and forwarded to two House committees an inspector general report that identifies several areas where Chao apparently violated ethics rules. The report notes that in December 2020, the IG had “referred” its investigation to the Trump Justice Department and the US attorney’s office in Washington, DC, for possible criminal prosecution, and that both had declined to open an investigation.

In a press release accompanying the release of the IG report, the House Committee on Transportation and Infrastructure and the Committee on Oversight and Reform listed four areas where Chao, who is married to Senate Republican leader Mitch McConnell, seemingly “violated Federal ethics laws.”

Regarding the last item on the list, the IG report detailed one of the examples:

On September 24, 2017, Secretary Chao sent an email to an [Office of the Secretary of Transportation] staff member with the subject line, “Dr. Chao’s [redacted].” In the email, Secretary Chao stated, “He bought a new [redacted] at [the store] 2 years ago. 2 years later, it has malfunctioned. was bought from [redacted] their shop. It was returned to them for repair. The estimate was 6 weeks. [Foremost Group employee] has called and some parts had not come in and it will still require 2 more weeks. This is not right. Please call [redacted] owners and ask them to expedite. I used to go into the store with Dr Chao ….tell them I am SOT [secretary of transportation].” On September 30, 2017, Secretary Chao sent an email to two OST staff members, stating “please call [the store] again and check on status. Dr C still has not heard. Do they send [redacted] for repairs [redacted]? and thus have no control over how long it takes? [OST staffer]: If [OST staffer] is not around, please call [store] and check on when ready.” When asked about this incident in during his December 2020 interview with OIG, DOT General Counsel Steven Bradbury said these types of events should be avoided and ideally the Secretary would make other arrangements.

Tell them I am secretary of transportation. That certainly seems to have been an improper use of her government position.

A letter from the Transportation Department’s deputy inspector general to the two House committees notes that in October 2019 the committees requested information regarding “potential conflicts of interest and favoritism involving” Chao—specifically whether she or an aide helped steer Transportation Department grants to Kentucky, the state her husband represents in the Senate, and whether she had violated ethics rules by maintaining holdings in a stone and asphalt company called Vulcan Materials.

The report adds that the IG “offered” Chao “the opportunity to share her thoughts regarding the ethics issues under investigation” and “was advised that Secretary Chao had nothing to add.”

An earlier version of this article misstated the department that Elaine Chao invoked in leveraging her title in a September 30, 2017, email.