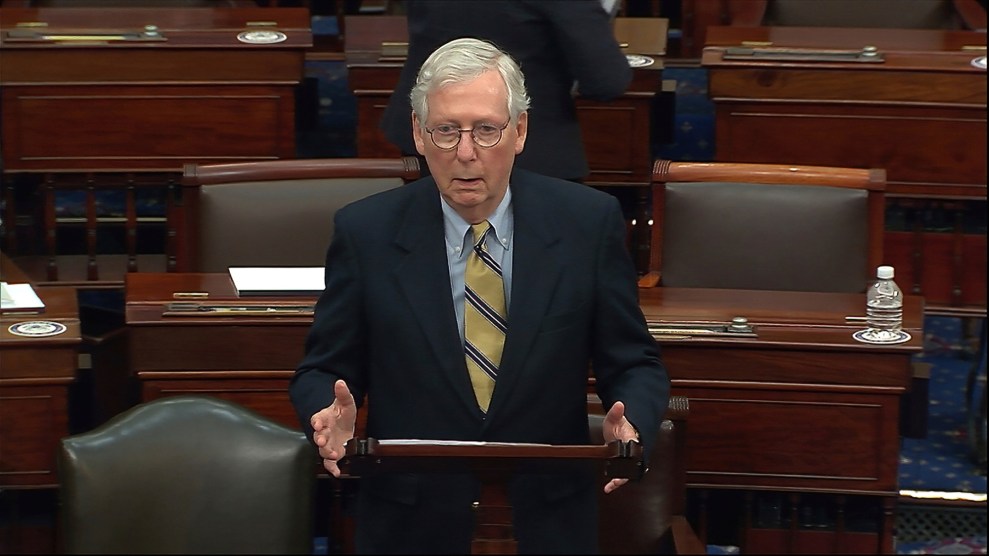 Last week, the Senate voted to acquit former President Donald Trump of the charge of inciting the insurrection on January 6 that left five people dead and more than 100 law enforcement officials with injuries. To say the president was not guilty in the face of the overwhelming evidence presented by the impeachment managers was no easy feat. Long-time Trump enabler turned apostate Senate minority leader Mitch McConnell (R-Ky.) joined others in voting to acquit based on the fact that Trump wasn’t president any longer, even though the former majority leader is the one who delayed the trial. But he quickly followed his vote up with a lengthy (but ultimately, hypocritical) speech excoriating Trump. It hardly matters. The acquittal, though seemingly inevitable, has marked the beginning of the next era of American politics; a brutal one likely involving escalating political violence. Our history shows us what happens when political violence fueled by white supremacy goes unpunished.

By voting not guilty, 43 Republican Senators gave their tacit approval not only to Trump’s incitement of violence but to the very act of violence. As long as lying about election fraud—even if it leads to an insurrection— has been sanctioned by large swaths of the Republican Party, the disproportionately powerful “base” will undermine democracy every chance they get. Some of those efforts will be attempts to curtail voting in cities and states with a high concentration of Black voters, while others will require conjuring and amplifying dangerous lies about elections to keep an already angry base frothing at the mouth. In both political gamesmanship and literal fact, one thing is clear: There will be more violence. There is no shortage of evidence showing that violence is what white supremacists do when they’re emboldened.

As we know, the failure of Reconstruction—the period after the Civil War during which the Republican Party attempted to integrate the new freedmen into civil society—gave way to even more violent white campaigns throughout the country. So too will the failure to hold Trump accountable embolden the most extreme and violent portion of the Republican party, no matter how much the seven GOP senators who broke with the former president try to bring the party back from the chaos of Trumpism. The only meaningful lesson that the former president’s fans who comprise this powerful part of the GOP have learned is how to be successful the next time they try to overturn an election. For the first time in history, thousands of people, nearly all of them white, armed with flagpoles, bats, and pepper spray came perilously close to stopping the certification of the presidential election at the citadel of American democracy. But this was not the first time in our history that thousands of armed white people decided to take matters into their own hands.

Towards the end of the Reconstruction era, Southern Democrats launched a bloody effort to restore white supremacy to the defeated South. First, President Rutherford B. Hayes withdrew the final federal troops from the South, and white Democrats in the South essentially pinky-promised Hayes that they would not discriminate against Black people. But, as we all know, the promise was empty. Democrats continued to inflict violence on the freedmen and began enshrining discrimination through law. Reconstruction ended swiftly after a brief and almost promising beginning but its lesson was not only that you give some people an inch, and they’ll take a mile. The lesson is that one critical act of violence in which no consequences are suffered—take a president triggering and sanctioning an insurrection—inevitably begets more serious violence in the future.

Consider the series of events that began on November 8, 1898, when Thomas Tolbert, a white Republican in Phoenix, South Carolina, stood outside a polling place with several Black men. They were collecting affidavits from African American men who had been unable to vote in that day’s election. Tolbert set out to expose this fraud in court by gathering evidence. But when white Democrats caught wind of what Tolbert was doing, a group of local white Democrats, led by Bose Ethridge and Robert Cheatham, ordered Tolbert to stop. When he declined, Ethridge kicked the box of affidavits and began to beat Tolbert with a piece of board from the box. A fight ensued between the two men, and others got involved. Someone was pushed from the porch on which they were standing and—as one does when pushed from a porch—began firing his gun. No one knows who started firing the weapon, but Ethridge was killed in the scuffle.

Word traveled throughout the region and other white men were inspired to visit to Phoenix and exact vengeance. “The whites, several hundred strong, are well armed and determined and if leaders in to-day’s troubles are caught to-night no power on Earth can save them from a lynching,” wrote the New York Times at the time. The terrorizing whites harassed the Tolbert family so relentlessly that they were driven from their home. They also lynched four Black men behind the Rehobeth church—where Tolbert and other white people worshipped. Over the next few days, at least eight Black people were killed. Naturally, no one was charged with a crime.

But here is what matters about this episode regarding the post-insurrection period of our history today. This unpunished violence, these murders with no consequences, offered a blueprint for future action. A mere two days later, a violent white paramilitary group overthrew the multiracial government in nearby Wilmington, North Carolina. It remains the only successful coup in the United States. These are not isolated incidents. There may even be a kind of causality.

Today, most of the GOP is coalescing around the person and the violence that was organized around the Big Lie, while almost every Republican Senator who voted to convict Donald Trump has been censured by their state’s GOP.  “We did not send him there to vote his conscience,” said Dave Ball, the Washington County, Pennsylvania, GOP Chair, about Sen. Pat Toomey (R-Penn.) “We did not send him there to ‘do the right thing’ or whatever.” (The “or whatever,” says it all.) For Republicans in these states, censures require little effort but draws attention to the traitors amongst them—and that attention can have dire consequences. When the House voted to impeach Trump, Republican lawmakers reportedly were worried that a yes vote could mean death threats—or worse. What’s a little vote against your conscience when your life and the lives of your family might be at stake?

Even knowing that they are essentially putting their colleagues in harm’s way have not stopped Republicans from targeting other lawmakers. For some, like Rep. Marjorie Taylor Greene (R-Ga.)—a supporter of the QAnon conspiracy theory who was stripped of her committee assignments last month—that seems to be the point. Rep. Jamie Herrera Beutler (R-Wa.) voted to impeach Trump and during the trial released a statement that provided more evidence that Trump was guilty. This was red meat for Greene, or, as she put it in another context, “the gift that keeps on giving.”

The gift that keeps on giving to the Democrats.

First voting to impeach innocent President Trump, then yapping to the press and throwing @GOPLeader under the bus, and now a tool as a witness for the Democrats running the circus trial.

“The Trump loyal 75 million are watching,” Greene tweeted. We’ve already seen what “the Trump loyal” are capable of at the Capitol. We know that they also have been sending death threats to Republican lawmakers who get out of line. Greene’s not-so thinly-veiled threat isn’t about getting primaried but about getting physically attacked.

Georgia swung blue for the time since 1995, after Black activists organized a campaign to increase voter turnout. Faced with the robust voter turnout among many Democrats, especially people of color, state legislators wasted no time in trying to make voting harder for residents. This week, a state Senate committee advanced a bill that would end at-will absentee voting and restrict it to those who are at least 75 years old, have a disability, or those who are out of town.

Even after dozens of lawsuits, after the likes of Mitch McConnell and former Vice President Mike Pence have been clear that Joe Biden won the presidential election, proponents of the Big Lie that Trump was the real victor in the 2020 race have yet to tell their supporters that it is, in fact, a lie. (One exception appears to be GOP donor Fred Eshelman who had $2.5 million laying around and donated it to a group that promised to find election fraud. Now, in a classic case of buyer’s remorse, he wants his money back because he realized the very reason for his donation was all made up.) If Trump had been convicted last week, it would have been the first step in building an accurate narrative about all the events that led to The Lie and culminated in violence and chaos on January 6. Refusing to admit that these crazy fantasies led to the Capitol insurrection lays the groundwork for justifying the repetition of such political violence.

The trajectory of American history depicts a nation always at war between maintaining its centuries-long commitment to white supremacy and a commitment to multiracial equality and democracy. Whenever white supremacy wins, as it did during Reconstruction, proponents of the ideology don’t yield. Instead, they double down on the violence and destruction. Despite the prosecutions and de-platforming of the most violent of the insurrectionists, in the end, the Capitol attack and subsequent Trump acquittal was only a small battle. The next one is likely to be far bloodier.