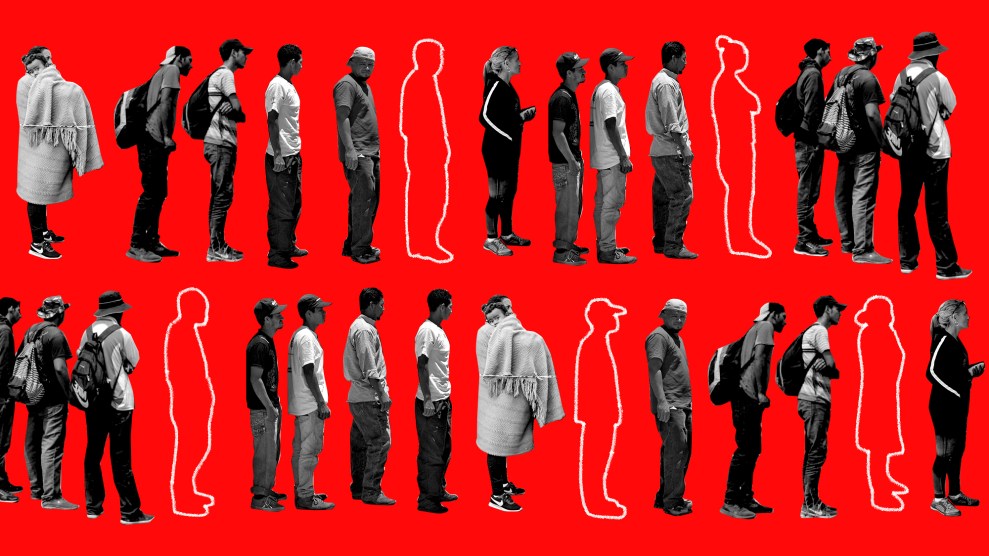 In 2015, Austin Kocher, who studies immigration enforcement and the courts as a research associate professor at Syracuse University’s Transactional Research Access Clearinghouse, was at a taco stand in Columbus, Ohio. He noticed a small jar next to a picture of a teenage boy from Central America who had passed away. The boy’s family was raising money to take his remains back home, and Kocher began to realize what a logistical nightmare the family faced, on top of their loss and grief.

Six years later, the Arizona-based humanitarian group No More Deaths released a report that focused on how the Border Patrol’s lax response to emergency calls along the southern border often has left migrants in the desert to disappear or die. Kocher read the damning account, titled Left to Die, and discovered that the agency had failed to conduct searches or rescue operations for 63 percent of all emergency requests, which the researchers attribute to “systemic and deadly discrimination.”

The February report that focused on the Border Patrol got Kocher thinking more generally about deaths among immigrants while they waited for their hearings. Or, as he says, “how the government plays a role in letting people die simply by doing nothing.” It also made him reflect on all the ways migration and death intersect. “It’s not just the kind of spectacular death that happens at the borders and deserts,” Kocher says, “but the everyday, mundane things too.” So, on February 5, he tweeted a troubling question for immigration lawyers: “How many of you have had a client die while still in the immigration system in some way?”

“It’s not just the kind of spectacular death that happens at the borders and deserts, but the everyday, mundane things too.”

He was curious about immigrants dying while waiting for paperwork—from asylum to citizenship applications—to be processed in what he describes as “America’s immigration waiting room.” But he wasn’t sure immigration lawyers would volunteer to share stories, or even if that was a common experience. The 50 or so responses surprised Kocher and offers a window into a dysfunctional and punishing immigration system.

Some of them are also just heartbreaking.

His funeral is Monday. I'm going to go. I have to. But I don't want to. This really hurts.

One Houston attorney described a client who was shot and killed at a Christmas Eve party after fleeing violence back home and waiting for more than five years for an asylum hearing. Another lawyer based in Los Angeles talked about an LGBTQ asylum seeker who had been detained at California’s Otay Mesa detention center for more than a year. He died of a heart attack right when his appeal was close to being granted.

Lily Axelrod from Tennessee mentioned having several clients with pending cases who died from COVID-19. After having been ordered deported, another client committed suicide. Several other attorneys answered with a “yes” or raised hand emojis. Kocher saw this as an indication that there were many more stories are out there, but they are just not being discussed.

Had a client on the cusp of a 601 waiver, to return to the US & take care of his wife dealing with terminal cancer. The process was almost done, the end was in sight – and the poor guy is killed in an accident.

Several. A couple were murdered during the course of fighting their cases. A lot had chronic diseases, but DHS thought it was more important to prosecute them over a 20 year old weed conviction or something.

Many of the examples of “death while waiting” that Kocher’s question prompted can’t be directly attributed to the immigration system or the United States government. Motorcycle accidents and terminal illnesses are to blame. These fatalities are not accounted for in immigration statistics. But they evoke a concept known in the social studies field as “slow violence,” a kind of structural harm that happens “gradually and out of sight” and is often hard to assign to a specific perpetrator.

“If someone has been deported and killed, there definitely is some moral and ethical culpability on the United States for having done that.” Kocher says. “For people who die while they are being processed in the US, the moral and ethical part of it is a lot more ambiguous and nuanced.”

Brennan Gian-Grasso, a private immigration attorney working on removal defense and family petitions in Philadelphia, hasn’t forgotten how one of his clients became a grim statistic: the city’s first murder of 2011. Another one of his clients was a cab driver and married to a US citizen. After fighting his case for five years, he got shot in the back of the head while at work and died. Others suffered from muscular dystrophy, early onset dementia, and heart diseases. For many, the lengthy wait for immigration relief had to do with decades-old convictions for small crimes like marijuana possession. Gian-Grasso wonders, if his clients had had a more stable immigration status, maybe they wouldn’t have turned to dangerous jobs or found themselves in risky situations. But because of the unforgiving nature of immigration law, his clients, who are often poor and not white, “have to live their lives while it all can be taken away from them.”

“It radicalizes you in some ways, and you internalize some of the trauma,” he says about the work. “One day you’re fighting for this client, and you get to know them personally. And then one day they’re just gone. It really underscores how unfair and nonsensical the system is—it’s not really a question of justice.”

The years-long waits for a chance to ask for asylum before an immigration judge or to be reunited with family members raise another question, Kocher says. “What is the dignity of a person’s life when they are trying to get status, and they die in the process through other means?”

As he reflected on the responses and learned about some stories that usually remain invisible, Kocher realized, “There are lots of different ways that our immigration system kills immigrants, from forcing migrants into the desert, to deporting people back to places where they are hurt or killed, or making people wait and suffer in mental and emotional anguish for years and years for their applications to go through.” If there was one reason that he sent out the tweet, it was because “I want more people to understand how damaging the immigration system is.”

The US immigration system is not about legal and illegal. It's about life and death.https://t.co/CUMnlR9z2u