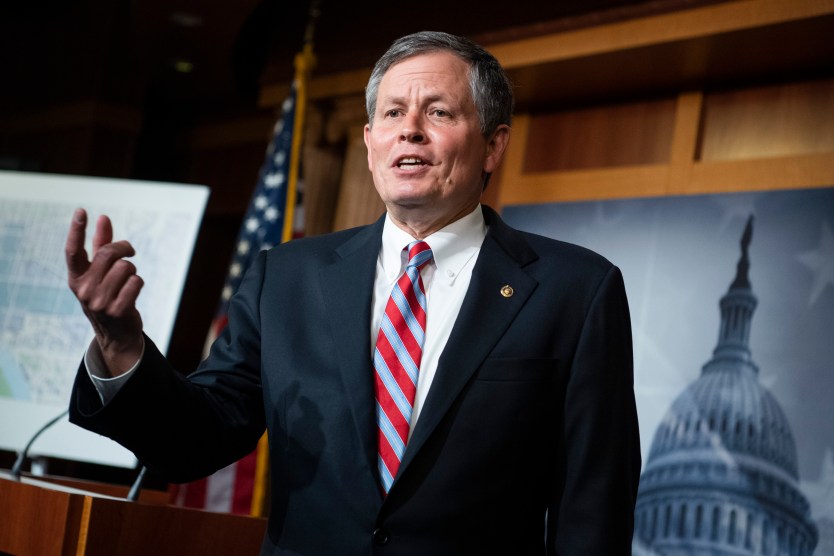 This story was originally published by Huffington Post and is reproduced here as part of the Climate Desk collaboration.

Sen. Steve Daines (R-Mont.) announced his opposition Friday after a conversation with Haaland, who would be the first Native American to serve as the top steward of America’s public lands and waters. Montana’s junior senator signaled he would not only vote against her confirmation but attempt to block her nomination from advancing.

“I’m deeply concerned with the Congresswoman’s support on several radical issues that will hurt Montana, our way of life, our jobs and rural America, including her support for the Green New Deal and President Biden’s oil and gas moratorium, as well as her opposition to the Keystone XL pipeline,” Daines said in a statement Friday. “I’m not convinced the Congresswoman can divorce her radical views and represent what’s best for Montana and all stakeholders in the West. Unless my concerns are addressed, I will block her confirmation.”

Sen. John Barrasso (Wyo.), the top Republican on the Senate Energy and Natural Resources Committee, joined the mudslinging Monday, telling E&E News that Haaland’s “radical views are squarely at odds with the responsible management of our nation’s energy resources.”

“Her vocal opposition to oil and gas production on federal lands will only encourage President Biden along the illegal and reckless path that he has begun,” Barrasso added. “Representative Haaland must demonstrate that she will follow the law, protect the multiple uses of our public lands, and reject policies that will force energy workers into the unemployment line. I won’t support her nomination otherwise.”

The two senators’ full-throated endorsement of fossil fuels is expected, as the oil and gas industry has been a top-five contributor to both over their careers, giving $1.16 million to each, according to the Center for Responsive Politics. Both were fierce supporters of the Trump administration’s fossil fuel-centric “energy dominance” agenda.

But Daines’ attempt to paint Haaland, a 35th-generation New Mexican and by all standards a qualified nominee for the post, as an extremist threat to America is, well, extreme. Although Daines’ effort is unlikely to succeed, he stands out as the first senator to expressly oppose Haaland for the powerful position. The Senate generally approves qualified Cabinet nominees, even from the other party.

Daines often portrays himself as a champion of America’s public lands. “In Montana, public lands are a way of life,” says a section of his website. In contrast, though, he and Barrasso voiced no concern when President Donald Trump put William Perry Pendley, a conservative lawyer with a history of lobbying for the sale of federal lands and of ridiculing Native Americans over their religious beliefs, in charge of the Department of the Interior’s Bureau of Land Management.

After Pendley’s backdoor appointment as acting director of the agency in late July 2019, Daines dismissed concerns about the new Trump official’s past support for pawning off federal lands as “overblown.” Barrasso said Pendley “knows firsthand the impact public lands have on our state” and that he was looking forward to “working with him to protect public access for those who live, work and recreate on public lands.”

A few months later, Daines signaled he’d vote to support Pendley if Trump were to officially nominate the anti-federal-land extremist. When Trump finally did, Daines kept quiet so as not to spoil a recent victory with environmentalists ahead of his bid for reelection. Barrasso said he’d vote to confirm Pendley to lead a bureau that manages more than one-third of all federal land and 700 million subsurface mineral acres.

At a Colorado county Republican breakfast in 2009, for example, he railed against “American Indian religious practitioners and their increasing insistence that federal land and private property be off-limits to use because it’s ‘holy’ to them.”

“The Indians have been doing this for a number of years,” he added.

In August, The Intercept documented Pendley’s decadeslong record of pushing “rhetoric, legal arguments, and policies that sought to deprive Indigenous people of their rights.” Among other things, The Intercept highlighted an excerpt from Pendley’s 2006 book, “Warriors for the West,” in which he writes, “The day may come sooner than many expect given that, with ever-declining blood quantum per tribal member, recognized tribes may soon be little more than associations of financial convenience.”

Matthew Fletcher, director of the Indigenous Law and Policy Center at Michigan State University and a member of the Grand Traverse Band of Ottawa and Chippewa Indians, told The Intercept at the time that Pendley’s writings were “overt racism” and “just a crazy, crazy racist perception of what Indian people are and what tribes are.”

None of this garnered a public rebuke from Daines or Barrasso. But when Biden tapped Haaland, an enrolled member of the Pueblo of Laguna with broad support among elected tribal leaders and intertribal organizations, to help carry out his environmental agenda, they reached for their megaphones.

The discrepancy was not lost on Daines’ critics, including in Montana.

In a Monday letter to Daines, Whitney Tawney, executive director of the left-leaning Montana Conservation Voters, called on Daines to reconsider his plans to block Haaland’s nomination and excoriated the senator for his months-long silence on Pendley.

“Mr. Pendley’s radical, anti-Western policies included advocating for the selloff of our public lands but you refused to demand a confirmation vote for Mr. Pendley, allowing him to serve in what a federal judge called an ‘unlawful,’ unconstitutional leadership position,” Tawney wrote, referring to U.S. District Judge Brian Morris’ September ruling from his Montanta court that Pendley had illegally served as BLM’s acting director for more than 400 days. “Montanans wish you had expressed concern over Acting Director Pendley’s radicalism like you are now with the nation’s first indigenous woman ever to be nominated to a cabinet position.”

“Imagine having the audacity to tell a Native American woman that her views are harmful to the American way of life — not even a month after you participated in sedition,” Collins wrote.

Daines, a loyal Trump ally, was among a dozen GOP senators who announced in early January that they would challenge Biden’s victory over unproved claims of widespread voter fraud. He reversed course only after pro-Trump rioters stormed the U.S. Capitol on Jan. 6 in a violent attempt to reverse the outcome of the November election.

Daines’ office did not respond to HuffPost’s request for comment.