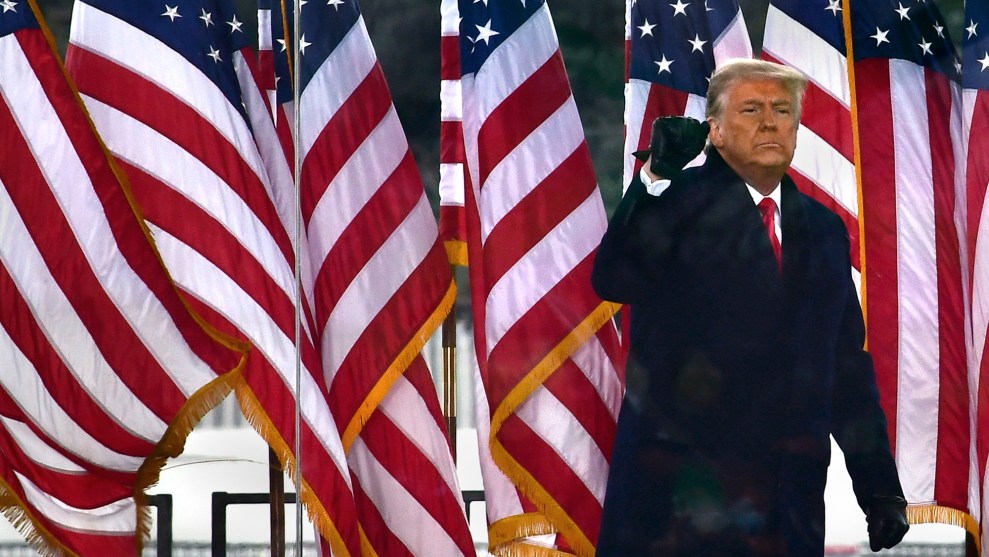 Trump speaks to supports at his Save America Rally before supporters march to the US Capitol on January 6, 2021 where some engage in a deadly riot. Carol Guzy/ZUMA

The second impeachment trial of Donald Trump has not yet begun and already it feels like it is ending with a whimper. Though charged with inciting the deadly January 6 insurrection at the Capitol, Trump and the Senate’s upcoming trial have not dominated the headlines. Impeachment trials usually last weeks, but this one is expected to wrap up in one week. This shrinking impeachment trial is a testament to what we all know: Republicans are extremely unlikely to vote to convict Trump. And so the question left is, what’s the point?

Despite this situation, the trial will be important, with major likely repercussions. Trump will walk away unable to claim a clean victory. The Republican Party will emerge damaged. And historians will study it as a moment the US’s Constitutional system once again revealed itself to be profoundly broken.

Democrats will prove Trump wielded intimidation and violence to thwart a transfer of power.

There was a moment in January, shortly after the violent riot, when it seemed possible that Trump would be convicted. Mitch McConnell, the powerful Republican leader in the Senate, said he was open to voting to convict Trump, sparking speculation that McConnell could bring along enough Republicans to secure a conviction—with 50 votes on the Democrats’ side all in favor, 17 Republicans would need to join them to hit the required 67 votes. The evidence is there: The high crime of inciting the January 6 riot was obvious and open. Americans heard Trump himself send his followers to the Capitol with instructions to “fight like hell.” They watched live on television and Twitter as the Capitol was then ransacked. They saw Republican leaders beseeching Trump to call off a mob that threatened to kill them. Five people died, including a Capitol Police officer.

But in the days that followed, this outrage faded into GOP unity around Trump. Ultimately, only 10 House Republicans voted to impeach a president of their own party, even after he’d sparked a deadly attack targeting their workplace. Soon, alongside 44 of his Republican colleagues in the Senate, McConnell backed a measure proclaiming the upcoming trial unconstitutional because Trump is no longer in office—a specious argument that is not backed by history, but one that Trump’s lawyers and the vast majority of Republican senators have embraced as a procedural dodge that will allow them to avoid convicting a guilty man.

“I think McConnell, like a lot of people, thought, ‘Well, we finally reached the breaking point.’ Trump has shot somebody on Fifth Avenue…it is now politically feasible for Republicans who secretly hate him to vote against him in public,” says Michael Dorf, a constitutional law expert at Cornell Law School. “But it turns out, no. Trump was right. He could kill five people effectively and not lose the core of his support.”

The problem this upcoming trial faces is more than two centuries in the making. “The US Constitution is a highly anachronistic document, that we barely retrofit to a 21st century republic,” says Dorf. When the founders crafted the Constitution, they neither imagined nor desired the rise of political parties. And even though parties immediately sprang up, they didn’t amend the Constitution to address them.

Today, with partisanship at a high water mark, the super-majority required to convict any president through impeachment is a near impossibility. “They’ve designed a system of government based on the assumption that people would be elected to office through their outstanding virtue. But in fact they’re selected based on party affiliation, and that has all sorts of ramifications—one of which is that when you have periods of sharp partisan divisions, a president can get away with almost anything,” says Dorf, “because he’ll have support from at least a blocking minority in the US Senate.”

With defeat almost assured, why should Senate Democrats bother with a trial? First and most fundamentally, it is the appropriate response to an attempted coup. The secondary reasons are largely political. Even though most Republicans are unlikely to be swayed by the evidence, the American people will judge Trump and the Republican Party by the events around January 6 and their response to them for years to come.

Though the trial is not expected to take long, it can still pack a punch. Even without live witnesses, Democrats plan to use existing footage to convince even more Americans that Trump attempted to thwart the transfer of power through intimidation and violence. “The very capable litigators among the House managers and counsel will be able to put on critically important witnesses through the use of video in the trial,” says ethics expert Norm Eisen, who served as special counsel to House Democrats in Trump’s first impeachment. “They will be able to recreate the events of the day through the words of the participants.”

Republicans are embracing a technicality to avoid finding Trump guilty.

There are recordings documenting rioters claiming they were only following Trump’s orders when they stormed the Capitol, which Eisen predicts will be used to great effect. “Part of the way we can prove what Trump meant was the reasonable understanding of the insurrectionists that he was commanding to attack,” he says. According to the Washington Post, court documents show that more than two dozen rioters charged for their involvement in the insurrection said Trump’s calls to gather in Washington inspired their actions. While Trump’s lawyers have indicated the former president will not testify at the trial, depriving the House’s prosecuting managers the chance to cross-examine him about his words and their meaning, Eisen believes video of Trump at his “Save America Rally” before the attack is all that is needed to make their case.

Just as Democrats used a vote on stripping committee appointments from Rep. Marjorie Taylor Greene (R-Ga.), a bigoted conspiracy theorist who had indicated support for executing prominent Democrats, to force her GOP colleagues to either refute or own her odious beliefs, the trial can also be used to force Senate Republicans to either link themselves with the events of January 6 or to cross Trump. Depending on their decisions, Democratic candidates across the country will be able to remind future voters, including conservatives wary of Trump, that the Republican Party is the party of the deadly Capitol riot.

Republicans are trying to dodge this link by embracing a technicality: that the trial itself is unconstitutional because Trump has left office. Though rejected by most constitutional scholars, this is expected to be the first subject tackled when the trial formally opens on Tuesday, with a simple majority vote on whether to proceed that will almost assuredly garner almost no support from Republicans. In a brief filed Monday, Trump’s lawyers  again argued the trial was unconstitutional, but also that Trump did not incite the riot by highlighting his use of the word “peacefully” at the rally. The brief also argues that Trump’s speech is protected under the First Amendment. Scholars on both sides of the political aisle have deemed the First Amendment defense “frivolous.”

Republicans, as Politico reported Friday, are still wary of a trial focusing on the riot itself. They should also fear a trial in which Trump’s team argues he had a right to spread the “big lie” that he actually won the election, despite losing it by 7 million votes and 74 electoral college votes. Republicans lost two Senate seats in Georgia last month after pushing a message that the November election was stolen, in part due to suburban Republicans jumping ship. If denying the outcome of unfavorable elections makes it harder to win future elections, that’s a trend Republicans need to step back from, not give Trump a new forum where he can double down on it.

As Republicans hope they can keep a short trial mired in questions of constitutional process, Democrats have tools to make the best of an impossible situation. The Constitution and partisan loyalty are stacked against them, but the facts are not.