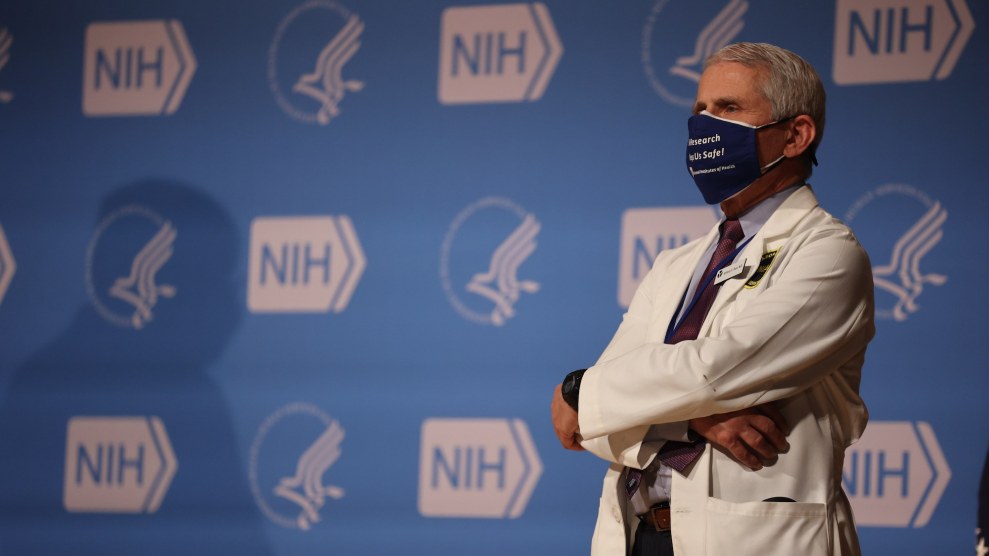 Dr. Anthony Fauci at the National Institutes of Health on February 11, 2021.Oliver Contreras/CNP via ZUMA Wire

America has been battling the coronavirus pandemic for nearly a year, and as of Sunday, nearly half a million Americans have died from COVID-19. But there is good news as well: Vaccines are showing promise in slowing the spread of the virus. One major challenge facing President Joe Biden’s administration now is the equitable distribution of vaccines—not only in America, but around the world.

The official death count stood at 497,000 on Sunday morning, according to the Centers for Disease Control and Prevention, though officials estimate the actual count is likely higher. The toll is staggering: More Americans have died from COVID-19 than the number of American deaths in any armed conflict except the Civil War.  “It’s nothing like we’ve ever been through in the last 102 years since the 1918 influenza pandemic,” Dr. Anthony Fauci said on CNN on Sunday morning. That disease killed 625,000 Americans over two years, a record COVID-19 threatens to overcome if the spread of the virus is not controlled in the near-term.

But there are signs that the virus is getting under control. Cases in the United States are declining. After inheriting a vaccination distribution mess from the Trump administration, Biden’s team has scaled up vaccine production, and more than 61 million have been administered so far. In a series of television appearances on Sunday morning, Fauci reiterated Biden’s promise that the US will have more than enough doses to vaccinate every American adult by the end of the summer. He added it is “very likely” that people outside of the priority vaccination groups will be eligible for vaccines before then.

While effective vaccines promised to reduce the rate of infection and the severity of symptoms among those who contracted the virus, preliminary results from two studies in Israel found that the Pfizer vaccine also significantly reduces the rate of transmission. That encouraging finding begins to answer questions as to whether vaccinations could also slow the disease’s spread.

Although the Biden administration has emphasized the need for equitable distribution of vaccines, early CDC data show that Black Americans are underrepresented among those who have received the vaccine, while white Americans are slightly overrepresented.  Inequality extends beyond America’s borders: The Serum Institute of India, the world’s largest vaccine manufacturer, predicted that the vaccine may not reach everyone in the world until 2024, and world leaders have criticized the U.S. of stockpiling the vaccine at the expense of the rest of the global community. (Last week, Biden pledged to give $4 billion over the next two years to international vaccination efforts.)

On Sunday, Fauci reiterated that mask-wearing will continue to be a crucial safety protocol for Americans to follow, possibly into 2022. “We will be approaching a degree of normality” this fall and winter, Fauci said. But, he added, “it really depends on what you mean by normality,” and named mask-wearing as a practice that may linger after schools and businesses return to more normal activity.