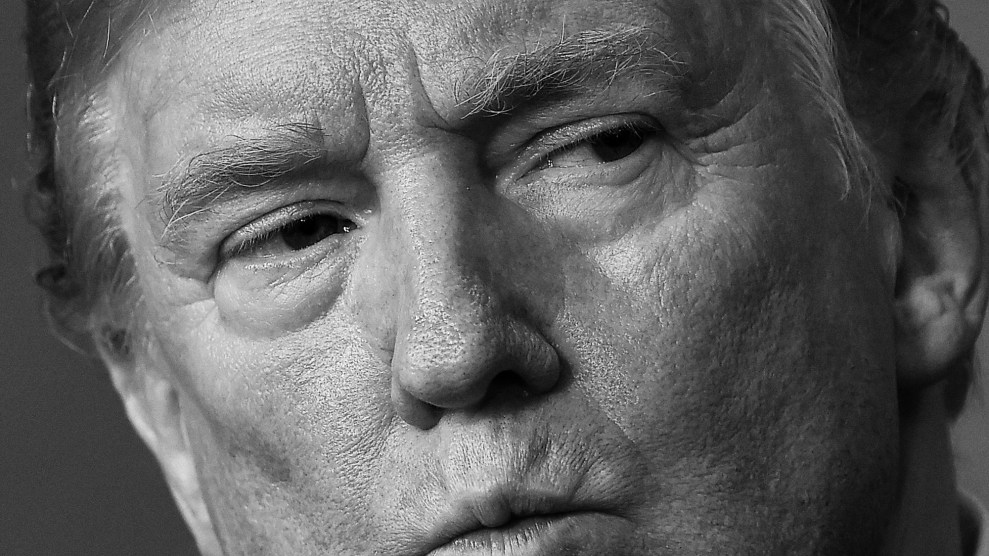 The Donald Trump–incited terrorist assault on the US Capitol appears to be a death spasm of the Trump presidency. But this attack may well be a signal that Trumpism will remain a destructive and divisive force within American politics long after Trump leaves the White House this month.

The insurrectionist raid on Congress, as it was counting the electoral votes, seemed a blow for Trump, a deadly provocation that backfired on him. In the aftermath of this putsch, several Republican senators withdrew their support for objections to the electoral vote certification. The certification was still delayed due to the two objections that did proceed, but the postponement of the inevitable finalé—Vice President Mike Pence declaring Joe Biden the victor—was shorter in length than Trump wanted. His chief henchman, Rudy Giuliani, had pushed senators to file objections so he could gain more time to continue his baseless legal shenanigans to overturn the election results. He had no chance of undoing the election. Still, the attack on the Capitol was counterproductive for Trump and Giuliani’s ridiculous efforts, as it further delegitimized their subversive endeavor. Following this violent convulsion, Trump’s last stand looked even uglier and more dangerous. At a rally prior to the riot, Trump and Giuliani had riled up the mob before directing it toward Capitol Hill, and this move ended up undermining their own plot.

Moreover, the attack and Trump’s pathetic response—in a video message asking for calm he told the marauders they were right to believe his false claim of a stolen election and that “we love you”—finally convinced several past and present Trump enablers it was time to leap from his crazy train. Former Attorney General Bill Barr, Sen. Lindsey Graham, Transportation Secretary Elaine Chao, Education Secretary Betsy DeVos, Melania Trump’s chief of staff Stephanie Grisham, and others resigned or denounced Trump. News reports noted that people within Trump’s inner circle were considering deploying the 25th Amendment to remove him from office in these final days of his presidency. John Kelly, one of Trump’s former White House chiefs of staff, said he would support that. Michael Chertoff, who was secretary of homeland security in the Bush-Cheney administration, called for the same. In an emotional speech, Senate Majority Leader Mitch McConnell, one of Trump’s chief handmaids, decried Trump’s baseless challenge of the 2020 election and warned Trump’s actions were threatening to throw American democracy into “a death spiral.”

With Trump’s official power about to vanish, his ol’ pals, who had for years abided his authoritarianism, demagoguery, bigotry, thuggery, narcissism, and reckless dereliction of duty (see the COVID pandemic), were now trying to escape Trump’s black hole. Other diehard Trumpists, such as Kellyanne Conway, Nikki Haley, and Sen. Ted Cruz, were attempting to distance themselves from the violence of Trump’s shock troops. It appeared that Trump’s world was shrinking and that part of the Republican landscape was crumbling for Trump.

One of the sharpest blows came from the editorial board of the Wall Street Journal, which is owned by Rupert Murdoch, who, with his New York Post and Fox News, has done more than anyone else to empower and boost Trump by peddling Trump’s lies to tens of millions of Americans. On Thursday evening, the Journal declared Trump’s actions were impeachable and called on him to resign: “He has betrayed his loyal supporters by lying to them about the election and the ability of Congress and Mr. Pence to overturn it. He has refused to accept the basic bargain of democracy, which is to accept the result, win or lose. It is best for everyone, himself included, if he goes away quietly.”

But though Trump issued a conciliatory scripted statement on Thursday night that was close to a concession, Trump and Trumpism are unlikely to go away quietly. Trump and the brutish political movement he has led do not need the WSJ and the now-fleeing rats to continue. Come January 20, the GOP may well not be free of Trump and his dark forces. More likely, the party will remain infected and, possibly, still under the control of Trump—literally and figuratively.

Since the election, Trump and his lieutenants have made it known that he wants to remain in charge of the Republican National Committee and that he is interested in running for president again in 2024. (On Friday, Trump devotee Rona McDaniel was re-elected to lead the RNC, just as Trump had wished.) A Trump presidential rerun may have become harder in the wake of the January 6 attack and a possible second impeachment. But even without a clear path for a such a bid, Trump has good reason for hanging on to the RNC: money. He has raised hundreds of millions in the weeks after the election for his own political operation, showing a capacity to bring in a billion dollars a year. He cannot use this money to pay off the hundreds of millions of dollars in loans he and the Trump Organization have coming due. But he can employ these funds to finance a huge infrastructure, with his aides and family members continuing to pocket millions from the grift. With many of Trump’s businesses in dire financial condition, it’s tough to envision him and his family giving up this massive stream of free money. In politics, money is usually king. If Trump sticks with this grift machine, he can swamp any other GOP entity in fundraising. Republicans will need him, if they want to collect cash for House and Senate races.

Beyond the dollars, it could well be too late for the GOP to de-Trumpify. Trump has mainstreamed crazy into the party. Look at the House Republican caucus. It is dominated by Trump extremists. Two-thirds of House Republicans backed his scheme to defy the popular will and overturn the election. Members of the caucus spoke at the rally where Trump and others incited the mob that would raid the Capitol. After the attack, House Republicans, notably Rep. Matt Gaetz of Florida, pushed the false and absurd conspiracy theory that the violence was the fault of antifa operatives who had infiltrated the pro-Trump protestors. They were trying to defend the mob. The new class of House Republicans include QAnon follower.

This band of coup-supporting, QAnon-friendly, Trump-cheering Republicans are only seven seats away from gaining control of the House. For anyone thinking (or hoping) Trumpism is gone once Trump is out of the White House, just look at the lower chamber. (The 50-50-divided Senate, too, will still contain a Trumpish bunch of Republicans.)

Then there’s Trump’s base. It may be too early to determine if millions of Americans who voted for Trump will sour on the former reality-TV show con-man due to the ransacking of the Capitol. One quick poll found that 45 percent of Republicans approved the terrorist attack. That’s a shocking stat. Even if that number is lower, it is likely that millions of Trump voters will stand by their man, believe his false claims of a fraudulent election, and rally to his phony Lost Cause narrative.

This will be an obstacle for any GOP that wants to become a post-Trump party. Trump and his loyalists have pledged to mount primary challenges against Republicans who did not support his coup. They have vowed to make this a litmus test for Republicans—and to initiate a civil war within the party over this one question. If millions of Republican voters stay with Trump, he and his minions can make good on this threat.

When the tea party arose in 2009, Republican leaders, including then-soon-to-be House Speaker John Boehner, saw it as a force they could opportunistically exploit and ride into power. But the extremist movement quickly swamped Boehner and others. Boehner won the majority but lost control of his own caucus in the House, and he eventually fled to calmer days of lobbying and sipping red wine. A similar dynamic occurred with the GOP and Trumpism. With millions of supporters, Trump crashed the party and forced it to bend its knee to him and his flock. The party did so all too willingly and transformed itself into a cult of personality for Trump. For many Republicans, this was a cowardly concession to political reality. (We’re looking at you, Ted Cruz.) Defy Trump and you were toast—because he had the masses (and conservative media, including Fox News and Rush Limbaugh) on his side, and he could reach and inflame them with a single tweet.

How much will all that change now? Certainly, an out-of-office Trump will be far less powerful. But if he retains his fundraising clout and his influence over millions who believe his bullshit about a stolen election, he will not easily be vanquished from the Republican Party. At the rally that preceded the terrorist raid on the Capitol, a screaming Donald Trump Jr. railed against Republicans who were not fighting for his father and screamed from the stage, “It’s Donald Trump’s Republican Party.” He was right.

Hours later—after Trump’s rioters rampaged and killed on Capitol Hill—many in the Republican establishment who had loyally served and enabled Trump began scurrying away from their Dear Leader. Days later, it no longer seemed impossible that some Republican senators would support a second impeachment of Trump. But after years of embracing Trump, the Republican Party will not be able to cleanse itself of Trumpism and its hate, paranoia, bigotry, and extremism. There are historical reasons why all this took root within the GOP, and there are nasty political realities that cannot be wished away by those Republicans who might finally fear things have gone too far.

When he ran for president, Trump successfully mounted a hostile takeover of the Republican Party. And he has held the the GOP hostage ever since, with many in the party willingly becoming hostages. Now, despite all the damage he has done to the party and the nation, he will not be easily dumped. More important, the anger and hatred Trump unleashed—which the GOP for years accepted and exploited—will not disappear once he departs 1600 Pennsylvania Avenue. Whatever the size, Trump’s authoritarian movement remains, and, as tragically demonstrated this week, it has a militant wing that yearns for armed rebellion. Trump knows all this. On Friday morning, he tweeted, “The 75,000,000 great American Patriots who voted for me, AMERICA FIRST, and MAKE AMERICA GREAT AGAIN, will have a GIANT VOICE long into the future. They will not be disrespected or treated unfairly in any way, shape or form!!!”

Long into the future. That may be no idle boast. Because of this, there will be no simple, no-mess break-up. No matter what Trump himself does, the GOP’s Trump problem—and the nation’s—is not going away.